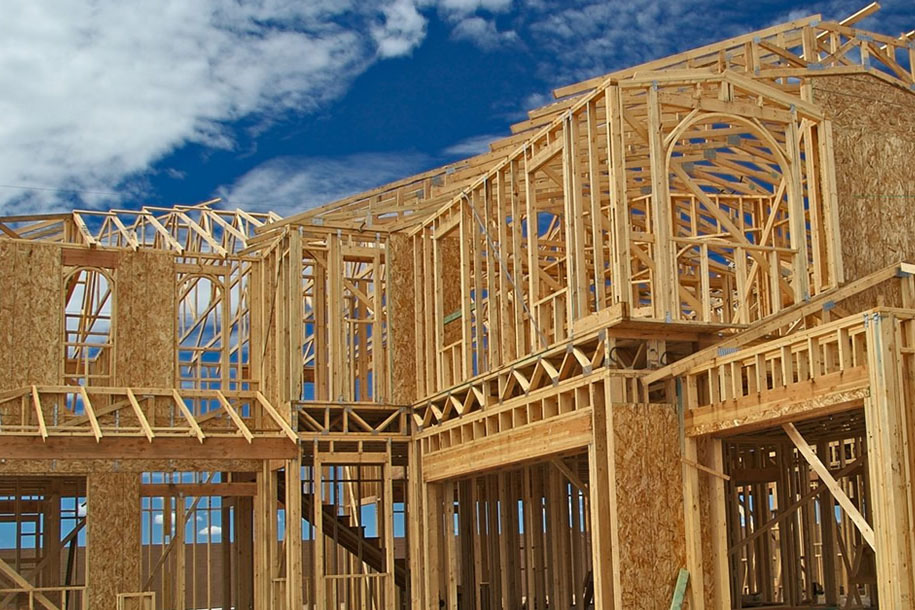 The domestic log market continues to have strong and consistent demand for all grades of logs from pruned to round-wood. There are still some regional shortages in quality structural and pruned logs. Whilst some sawmills have noticed demand tailing off from the Christchurch rebuild this has been replaced by the construction boom in Auckland.

Prices paid by log exporters for logs at ports around NZ increased sharply in January with a slight reduction in February. Export markets are expected to remain steady for the next few months with any price changes for logs at New Zealand ports a reflection of shipping and exchange rate fluctuations.

The domestic log market continues to be strong and consistent for all grades of logs from pruned to round-wood. There are shortages of quality structural and pruned logs in Northland, Central North Island and Canterbury.

Sales of sawn product into the European clear-wood market according to one CNI sawmill has been “hammer and tongs”. NZ Radiata pine is replacing Southern Yellow Pine (SYP) from North America. Radiata has less downgrade, and is more reliable in performance with less checking etc. As people replace a door or a lintel from SYP to Radiata pine they like the entire interior to match so eventually replace all the wooden components within the internal architecture. Spain and the Canary Islands are two markets in particular that are developing a real demand for NZ Radiata pine clear-wood. A steady favourable change in the Euro/$US cross exchange has assisted NZ exporters into Europe as well.

The Asian clear-wood market demand is not as buoyant resulting in price pressure. Asian processors are concerned about any potential Trump protectionism resulting in tariffs on finished wood products imported into the United States of America. They don’t want to get caught with full warehouses if this were to happen, and are only buying lumber to replace stock or fill existing orders.

The Australian and U.S. clear-wood markets are steady.

The local demand for clear-wood is steady and strong. The closure of some mills around NZ over recent years has also meant a reduction in supply to the benefit of existing mills.

Most sawmills supplying construction material report steady demand with a preference for the larger S30 type logs. Their mills are running at capacity with order books full for the next six months. Whilst some sawmills have noticed demand tailing off from the Christchurch rebuild this has been replaced by the construction boom in Auckland.

Inventory at the China ports rose sharply from the reported 2.2 million m3 in December 2016 to a current estimated 3.5-4.0 million m3. Lanshan port has an estimated inventory of 800,000 m3. This is a result of the Chinese New Year and is not a major concern as factories across China closed down late January. While market observers are keeping a watching brief on this increase in inventory, they do not hold major concerns for the state of the market. Whilst there has been an absence of market information over this holiday time in China several factors should assist with reducing this inventory.

Satinder Singh the NZ Manager for Aubade NZ, one of the main exporters of pine logs from New Zealand into India has provided the following commentary on the Indian market.

The Indian market continues to face the after effects of the demonetization (of large value currency notes) in November 2016. This move, done with the salubrious objective of reigning in black money and curbing an enormous parallel economy, affected almost all sectors of the Indian economy. It brought economic and business transactions in many sectors to a virtual standstill from November 2016 to January 2017.

Fearing a dull demand, most NZ exporters did not ship any log vessels to India for a couple of months. The largest affected segment was the Indian tropical hardwood logs trade, while pine demand suffered a decline in this period by 20-30%. However this lack of shipment from NZ created a gap in supply (Editor’s note: Logs exported from NZ to India by value in December 2016 were 62% down on December 2015), increasing sawn timber prices and the Indian NZ Radiata pine logs import market quickly played catchup with the strong China prices in February.

Another significant change in this period was the imposition of a service tax on the ocean freight component of all imports to India. India imposed a 4.5% service tax over freight on cargoes imported on a delivered or CFR basis on January 22nd 2017. This service tax was already being levied since June last year on cargoes that were imported on a FOB basis and ships chartered by importers domiciled in India. The move is significant because it will make cargoes of commodities such as timber, oil and coal costlier since ship owners will pass on the service tax to Indian importers.

The Reserve Bank of India (RBI) cut the economic growth forecast to 6.9% for the current fiscal year from the 7.1% estimated earlier, and predicted that the economy will bounce back to 7.4 per cent rate next fiscal year. The RBI is keeping key interest rates unchanged, saying it wants to assess how the transitory effects of demonetization on inflation and the output gap play out.

For Feb–March 2017 NZ Radiata pine A grade log prices are in the region of US$141-143 and ocean freight from NZ to India depending upon the NZ load port sequence varies from US$28/JAS to US$32/JAS. The freight market is expected to gradually firm up over the next few months.

It is expected that FY2017 annual volumes for NZ Logs for the Indian market will remain around 2 million m3and we may see a 15-20% growth in the following year.

Ocean freight has firmed slightly in the handy-size sector. Exporters are picking freight increases over the next couple of months mainly due to an increase in fuel prices. Current freight rates are in the range USD18-21 per JASm3 to China, and USD28-32 per JASm3 to India. Lloyds List intelligence Baltic Indices chart can be found here.

The greenback strengthened after US President Donald Trump hinted last week that he will soon announce tax cuts in the US, which helped drive US equity benchmarks to new highs. Reports of positive talks between Trump and leaders of China and Japan have also helped underpin the US dollar. But you won’t get any predictions here on where this will end up, as the Trump administration does seem to prefer a lower USD to reduce imports and boost export sales. The NZD/USD is currently 0.72.

We have long known that the majority of the logs China purchases from New Zealand are used to manufacture lumber and plywood that supports the construction of concrete dwellings. This is a high-volume but low value end-use and provides limited potential for wood products to break into higher value markets. 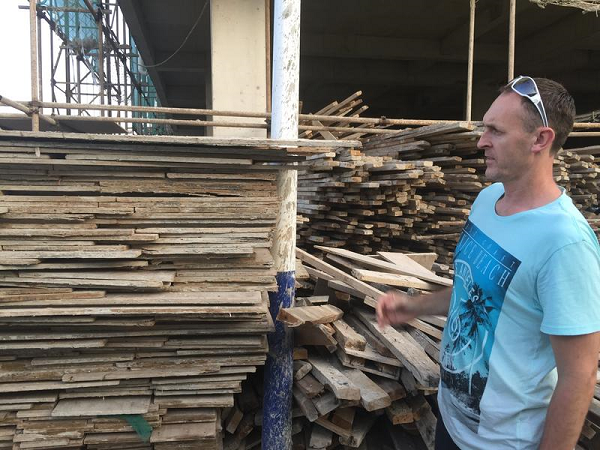 Scott Downs, PF Olsen’s new Wood Matters editor, inspects plywood and lumber that has just been used to support construction of a concrete apartment in Yunnan, China. The pieces that haven’t broken or been badly damaged will be used again.

That might be starting to change. There are encouraging signs that China is increasingly using wood in actual construction applications. This opens enormous potential new, and higher value, markets for wood. As usual Canada is very pro-active in this space, pouring millions of dollars into new product and market development in China. A new commercial-residential project located in Zhangjiako, Hebei Province, is using wood for roof trusses. These are going on top of traditional concrete wall structures. The first phase of the project consists of 115 town houses (over 400 individual units) and it will consume more than 2,000 m3 of Canadian SPF lumber. 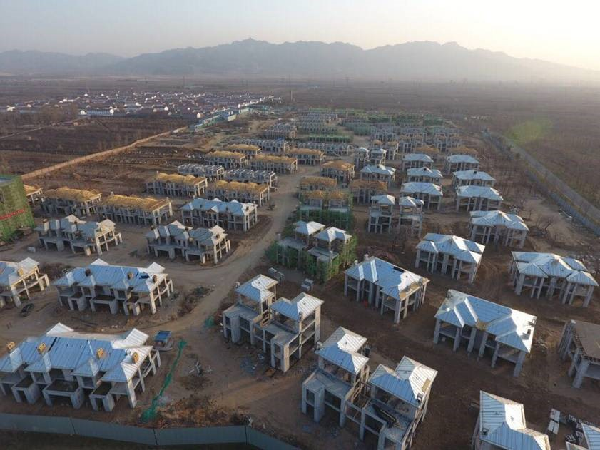 There are promising signs of increased use of wood as an actual component of Chinese building construction – a higher value use than the traditional concrete construction support role. Source of photo Canada Wood Today.

Drivers for the uptake of wood in this application by the developer were speed of construction, safety, and beauty (aesthetics). In addition, it was consistent with a recently issued national pre-fabrication government policy. For more information, click here.

New Zealand log exports by value increased in the 2016 year by 568 million NZD to a total of 2,557 million. This was a percentage jump of 29% on the 2015 year. China accounted for 77% of this increase with an additional 440 million NZD worth of export log sales. South Korea and India accounted for an additional 10% and 7% respectively. As mentioned earlier Indian sales slowed in quarter 4 with the total value of sales in this quarter 20% behind quarter 4 in 2015. 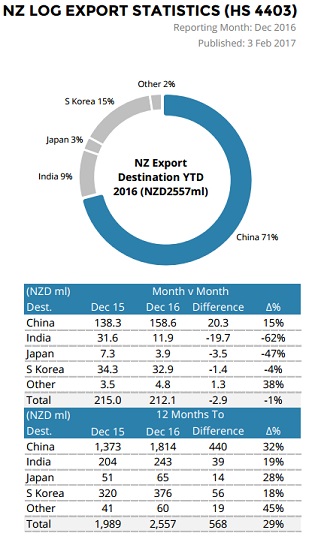 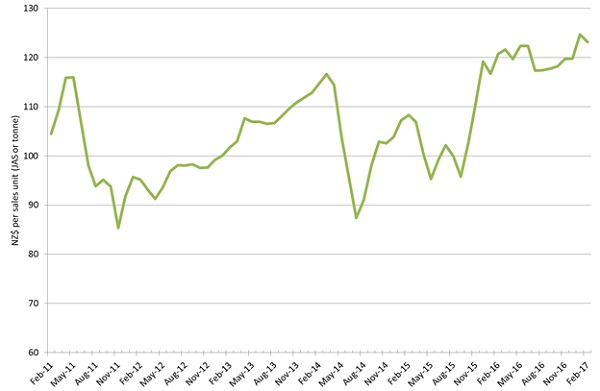