Allan Barber assesses the changing meat industry employment landscape and the role of the MWU, seeing a slow improvement despite some recent bumps with Talleys

Allan Barber assesses the changing meat industry employment landscape and the role of the MWU, seeing a slow improvement despite some recent bumps with Talleys 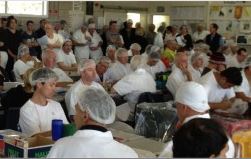 The heyday of union representation in the meat industry was more than a quarter of a century ago, but the union still has good coverage across the industry.

The decline of stock volumes, closure of the old monolithic single shift plants, shorter seasons and the Employment Contracts Act have all contributed to a massive reduction in the number of meat workers. This has had a dramatic impact on the sheer number of union members employed in the industry, but as a general rule the MWU has good representation across most companies.

The bad old days when the industry was bedevilled by strikes are a thing of the past, partly because of better engagement between management and union, but mostly because of the effect of the ECA which severely constrained the right to strike during defined industrial negotiating periods and while an agreement was still current. An obvious question is whether union representation is still relevant or effective in today’s meat industry, a question underlined by AFFCO’s determination in recent years to move the vast majority of its workers to individual employment contracts (IEC).

AFFCO under Talley’s ownership and direction has taken a very hard line with the union and has succeeded in getting an estimated 85% of its workers to sign an IEC. The dispute over working conditions, union membership and employment contracts at the Wairoa plant over five months in 2015/16 signalled AFFCO’s insistence on gaining improvements to its operational cost structures which the union clearly wasn’t willing to accept. After a court order the unrest now appears to have settled down and I understand a new collective employment agreement (CEA) is nearing conclusion across AFFCO’s North Island plants. But the effect of the dispute was to divide families and friends and a further dilution of union membership at the plant.

To my knowledge most of the country’s meat processors have CEAs in place, normally site specific rather than companywide. This begs the questions why AFFCO has pursued IECs so vigorously and which contract clauses the company would like to get rid of that other meat processors have been willing to accept. A clue to a possible reason appeared in the MWU’s December newsletter to its members and posted on its website under the headline ‘Silver Fern Farms – a big year ahead.’ Late last year SFF appears to have presented a draft CEA to one of its South Island works, saying the document was expected to be rolled out across every facility in the group in time.

The newsletter states “it’s a pretty thin document” that omits previously existing contractual provisions including seniority and fair seasonal re-employment, agreed manning, union rights and redundancy, but also seeking “dramatically lowered earnings (up to $80 a day less!), more work classed as C and B grade and a longer working day.” The union’s stated intention is to “stop these wage cuts and to prevent the break-up of our agreements.” Seniority was also one of the key issues in the Wairoa dispute. The seniority argument arises from the employer’s wish to determine the order in which it wants to re-employ seasonal workers, while a key contractual term for the union is worker re-engagement according to seniority i.e. first in, last out.

SFF CEO Dean Hamilton was unwilling to discuss progress, saying some individual plant agreements had already expired, while others wouldn’t expire until 2018, but this was a process that would take several months to resolve as is inevitably the case with all contract negotiations. Predictably he wasn’t prepared to play the process out in the media, although he was willing to confirm not all agreements were the same, with some being common to several plants while other agreements were site specific. But it seems to me SFF has decided it needs to improve its operating performance and worker employment terms are a critical part of that.

It is clear neither side will get everything it wants, but it’s a safe bet SFF will get movement on some of the terms in its draft CEA, while the union will be prepared to concede on some but not all the terms offered. To the casual observer, logic would suggest most collective agreements should be similar across the country with variations to take account of differences in plant size, geographical location, species and length of season. However this doesn’t always seem to be the case.

Reasons for variations are precedent and personalities. Some companies and plants have been in operation longer than others, so the original agreements were negotiated at widely different times. As a result, certain clauses remain unchanged for years, far longer than a newer plant’s document which has determined the terms and conditions of a contract without the constraints of history and tradition. Then again, negotiations always bear the stamp of the personalities on both sides of the table and as a result used to be far more tense and confrontational than tends to be the case today.

With exceptions – AFFCO Wairoa being an obvious case in point – relationships between meat processors and the MWU are friendlier than they were a quarter of a century ago. It looks as though both sides have reached the conclusion they need each other to achieve the best results for company and workforce.