The Weekly Dairy Report: It looks like another very wet calving start in the Waikato as analysts predict a big turnaround in this seasons milk flows

Rural News
The Weekly Dairy Report: It looks like another very wet calving start in the Waikato as analysts predict a big turnaround in this seasons milk flows 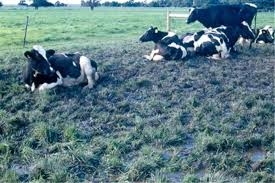 After a frosty period, another southerly blast is due to hit large areas of the nation, and feeding allowances will need to be adjusted for the predicted very cold conditions.

Feed utilisation rates will be compromised and intakes should to be lifted to allow for a temperature induced energy loss, as many cows are now just a month from calving.

Soils are very wet in the early calving areas of Waikato and managers will be having  pasture management dilemas about rotation speed and pugging post calving.

Last year was very similar, so advisers suggest use previous experiences for decision making, and pugging often looks worse than it is, but underfeeding because of poor utilisation can have major production effects.

They also suggest magnesium supplements should carry on for a month after calving, and southern managers are just starting preventative measures to ward off problems when they start.

National milk flows have ended only 0.6% down on the previous year, after the poor spring was boosted by a wet summer, and growthy autumn.

This fall in production is the second in a row, but bank analysts’ forecast a recovery of 4% this coming season and this should be coupled with better prices.

Last week’s global dairy trade sat in a holding pattern with whole milk powders lifting, but tempered by falls from other commodities, that caused the index to sit slightly back on the last event.

Butter prices further strengthen in the Oceania area, with values breaking through the NZ$8000/tonne barrier for the first time.

Rabobank reports that the growth of the infant formula market has been over hyped, and NZ needs to broaden its markets away from China and into countries like Indonesia and Vietnam.

The tractor sale barometer was strong at the Fieldays, and one major brand reported this was the best in the last seven, for sales.

In the Horizons regional catchment farmers are frustrated by delays in changes to the One plan as the scheme looks to adjust rules due to inaccuracies on how Overseer is used.