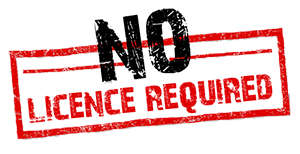 A Ministry of Business, Innovation & Employment assessment that introducing a comprehensive creditor licensing regime as part of the Government's crackdown on loan sharks would be worse than the status quo doesn't appear to be based on much evidence.

The recent announcement from Commerce and Consumer Affairs Minister Kris Faafoi included plans to introduce a "fit and proper person" test for lenders.

This means the fit and proper person test was chosen over two other options floated in June's Ministry of Business, Innovation & Employment (MBIE) discussion paper aimed at increasing lender registration requirements. The other two options were expanded powers to deregister lenders and ban directors from future involvement in the credit industry, and introducing a comprehensive creditor licensing system.

According to MBIE's assessment in a regulatory impact statement, both expanding powers to deregister lenders and ban directors from future involvement in the credit industry, and introducing a fit and proper person test in the registration of lenders, would be an improvement on the status quo. However, MBIE assessed that introducing a comprehensive creditor licensing regime would be worse than the status quo.

To become a consumer lender currently you must register under the Financial Service Providers (Registration and Dispute Resolution) Act 2008. Doing this requires satisfying simple requirements including not having been convicted in the past five years of crimes involving dishonesty and not being an undischarged bankrupt. You must also be a member of an approved dispute resolution scheme, thus providing consumers access to redress.

I asked MBIE how it had decided introducing a comprehensive creditor licensing regime would be worse than the status quo.

"The benefits of a comprehensive licensing regime would be outweighed by significant new compliance costs for lenders, many of whom are currently operating responsibly and some of whom are already licensed under similar regimes. Licensing may also unnecessarily stifle competition in the consumer credit markets by leading to lenders exiting and/or discouraging new entrants into the market. Reduced competition and increased compliance costs could further increase the costs of lending for consumers," an MBIE spokeswoman said.

"MBIE concluded that similar benefits could be achieved with the less costly options that were recommended."

I followed this up by asking how much MBIE estimates the "significant" new compliance costs for lenders would be, and which similar regimes MBIE was referring to that already licence some lenders.

"MBIE does not have detailed dollar estimates for the new compliance costs. However, the application, processing fees and costs and ongoing compliance costs in terms of reporting and technical financial requirements for similar licensing regimes such as those administered by the Financial Markets Authority and the Reserve Bank of New Zealand, can be quite significant," the MBIE spokeswoman said.

"Some lenders in the consumer credit market such as registered banks and non-bank deposit takers are already licensed and regulated by the Reserve Bank of New Zealand, while peer-to-peer lending platforms are also licensed by the Financial Markets Authority," she added.

MBIE's answers appear to assume that lenders already licensed would have to get a second licence if a comprehensive creditor licensing regime was introduced.

However, numerous other New Zealand lenders do not require licences, including major finance companies that don't use deposit funding. Among them are consumer lenders such as Latitude Financial Services (formerly GE Money), whose funding comes from the likes of asset-backed securitisation programmes and private syndicated debt. Another consumer lender that doesn't require a licence is FlexiGroup, the parent of the former Fisher & Paykel Finance business, which sources funding from banks and institutional investors via asset-backed securitisation programmes. And another is Instant Finance, which now sources most of its funding from Westpac. The likes of payday lenders and truck shops/mobile traders also don't require a licence.

MBIE's June discussion paper reviewing consumer credit legislation suggested it's probably easier to become a lender than it is for authorities to ban a misbehaving lender. The regulatory impact statement notes the majority of stakeholders and submitters who either are borrowers or represent borrowers, argued for greater registration or licensing requirements for consumer credit providers.

No double up on 'fit & proper person' test

However, the intention is that directors and executives of lenders who are already licensed and regulated under a separate fit and proper persons test scheme will not be required to pass a further fit and proper person test. This includes registered banks, licensed non-bank deposit-takers, and market services licensees under the Financial Markets Conduct Act such as peer-to-peer lenders.

The MBIE spokeswoman says a comprehensive licensing test would have involved the same fit and proper person test for directors and executives, with an additional examination of the applicant's compliance plans and systems.

The table below comes from MBIE's regulatory impact statement. You can click on the arrows in the top right corner to enlarge it. 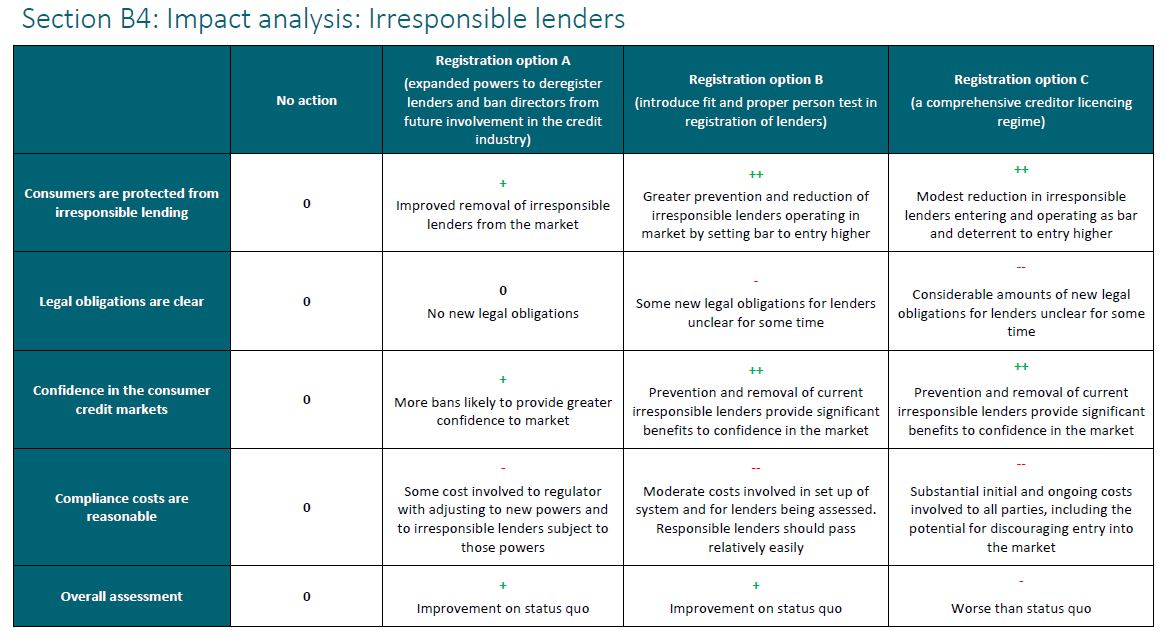 *A version of this article was first published in our email for paying subscribers early on October 17. See here for more details and how to subscribe.

This could end up a shambles .......... all we need is strict rules with the possibility of serious prison sentences for Directors who fail to comply with the letter of the law .

Its that simple , they have done it with Directors for breaches of health and safety , who not for loan sharks ?

"MBIE assessment that introducing a comprehensive creditor licensing regime as part of the Government's crackdown on loan sharks would be worse than the status quo doesn't appear to be based on much evidence." The responses quoted to your questions Gareth don't inspire much confidence core policy effectiveness principles are being used. Thus far, it's very patchy the extent to which this Govt's replacement of the previous two (Nat & Lab) Govts 'output' targets (oft-mislabelled outcomes) with actual outcome measures, thereby enabling better social/economic outcomes intended. NZ was a world leader in policy effectiveness/outcomes, stripped out in past 15 years with post-NPM/outputs focus. Elements remain, but it's very thinly spread. Some new measures already suffer the exact same faults of those they replace. The Govt's 'vibe' may be right, but absent capacity for connecting it with clear policy effectiveness principles guarantees policy failure. At this stage I can only count those on one hand, but this may be a contender, and if the slew of reviews runs on vibe alone...