Meanwhile the bottom line was boosted by a $73 million increase in mark to market movements on offshore debt holdings to $191 million.

CEO Angela Mentis says BNZ has been working closely with the Financial Markets Authority (FMA) and Reserve Bank (RBNZ) supporting their review of NZ banks' conduct and culture. A report from the FMA and RBNZ is due out on Monday.

"BNZ has already made positive changes as we identify opportunities to improve the way we work and quickly fix issues where they are identified. We have already removed sales targets for staff in key customer roles in branches and call centres, so our people can focus on delivering better results for customers," says Mentis.

Mentis also says BNZ aims to halve its products and simplify its fees over three years. And she says BNZ, which shut five branches during its September financial year, is set to commission its first mobile branch, which is due to be on the road in early 2019.

"The mobile branch is designed to provide our customers with the best of BNZ banking services at their local centre on a regular basis," says Mentis.

Meanwhile parent NAB posted a 14% drop in annual cash profit to A$5.702 billion. NAB's net interest margin was flat at 1.85%, and its return on equity dropped 230 basis points to 11.7%. The bank's paying unchanged annual dividends of A$1.98 per share, equivalent to 94% of annual cash profit.

(The tables & chart below come from NAB, firstly on the group's NZ market shares, secondly on its branches and ATMs in NZ, & thirdly on NZ credit impairments. Note, GLA stands for gross loans & advances). 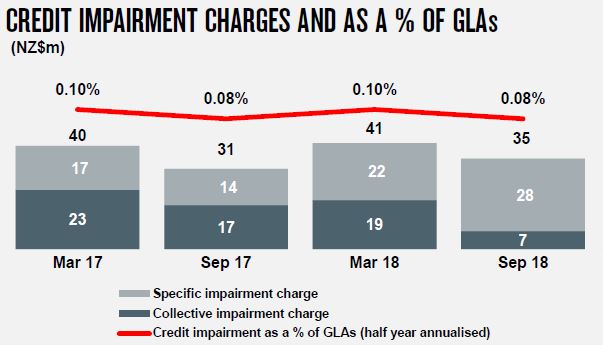 you saying they can pay depositors more ?

Of course they can.. but why pay more when people keep giving you money for (almost) nothing?

NAB Group's results show NZ operations up 6.7% - more lending to Kiwis - net margin increase; looks good.
But, their Corporate and Institutional operations improved ( at least they did!) by only 0.4%.
That, to me, flashes 'warning' if lending to predominantly retail customers in an overseas offshoot ($1,541m) betters local business activities. ($1,004m)
What happens if retail lending stalls or falls ( it is!)?
I guess we'll have to wait and see.

Zzzz. Who cares? A bank is a transaction vehicle only, all investment capital should be in low cost index funds. Shop out the bank with no fees, and switch banks if they impose fees. Term deposit rates?? Who cares...