In a submission on the Reserve Bank's proposals, Westpac says it supports the objective of ensuring New Zealand banks are well capitalised for the safeguarding of the financial system and the prevention of banking crises. However, the submission, authored by Westpac's general manager for regulatory affairs Mark Weenink, argues the Reserve Bank proposals go significantly further than required to meet these objectives, go well beyond international norms, and would create a productivity drag.

"Given the complexity of the combination of untested inputs and likely wide ranging impact of the proposals, a comprehensive independent cost-benefit analysis is required. In particular, Westpac considers that the proposals are unnecessarily conservative and, if implemented, will significantly impact the cost and quantity of credit available to New Zealand borrowers," Weenink says.

Rather than the Common Equity Tier 1 (CET1) heavy Reserve Bank proposals, Weenink argues that Total Capital, rather than CET1, should be the key metric with current use of additional Tier 1 capital, or AT1, and Tier 2 capital retained.

CET1, a subset of Tier 1 capital, consists of ordinary shares, retained earnings and some reserves. AT1, also considered Tier 1 capital, is capital instruments such as preferred shares that are continuous given there's no fixed maturity date. Tier 2 capital mainly consists of long-dated subordinated debt. Currently banks must have a minimum Total Capital Ratio of at least 10.5% of risk weighted assets, with 8.5% Tier 1 capital and 2% Tier 2.

The Reserve Bank proposals would see a minimum Tier 1 Capital Ratio of 16% for the big four banks and 15% for the rest, comprised of CET1, plus AT1 that meets proposed new requirements. However, Westpac is proposing a minimum total capital requirement of 16%.

"A minimum total capital requirement of 16%, subject to the qualifications proposed below, would provide a more cost-efficient capital structure and a reduction in the impact of changes on borrowers and the New Zealand economy," Weenink argues.

"AT1 capital allows for immediate recapitalisation of a bank as a going concern in the event of a fall in CET1 capital. AT1 is a feature of comparable international markets and...can be structured to address Reserve Bank concerns, while providing efficiency in a bank’s capital structure."

"Westpac proposes a minimum CET1 capital requirement of 11%, in addition to this, the 2% 'management buffer' would also be comprised of CET1 capital, which would continue to place New Zealand banks in a position of strong capitalisation by global standards."

Whilst the Reserve Bank is proposing to allow the continued use of AT1 capital, it wants banks' future AT1 capital to be more permanent and equity-like in terms of its ability to keep a bank a going concern. It proposes the removal of convertible contingent bonds, or CoCos, from use as eligible AT1 instruments. CoCos are debt that converts to equity once certain events happen such as a bank's capital ratio falls below a certain point. Banks get a tax benefit from issuing CoCos, whereas the proposed “perpetual non-redeemable shares” would be treated as equity for tax purposes.

Like the New Zealand Bankers' Association's submission reported by interest.co.nz last week, Weenink suggests the Basel III revised standardised risk weightings should be utilised for homogeneous products to “level the playing field” between banks using the internal ratings based approach (ANZ, ASB, BNZ and Westpac) and all other banks using the standardised approach. Weenink says Westpac's alternative capital proposals could be phased in over five years, which is what the Reserve Bank proposes for its own capital proposals.

"[But] the Reserve Bank should review the implementation of the revised capital proposals at the conclusion of the five year transition period, including the economic impact and changes to international regulation. This would allow for an assessment of the impact on the New Zealand’s economy and allow for observation of predicted capital regulatory change in international jurisdictions," says Weenink.

The Reserve Bank proposals announced in December would see NZ banks - led by ANZ NZ, ASB, BNZ and Westpac NZ - required to bolster their capital by about $20 billion over a minimum of five years. (For background and detail on the proposals and bank capital in general, and the nuts and bolts of what's proposed, see our three part series here, here and here.  Additionally the Reserve Bank proposes to designate the big four as systemically important banks meaning they'd have capital requirements above and beyond other banks).

The diagram below, taken from the Westpac submission, compares its alternative proposals to the Reserve Bank's proposals. 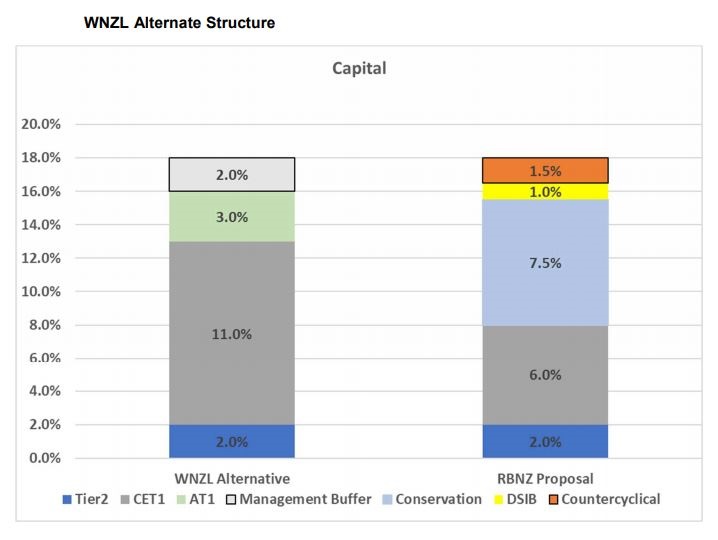 Non-compliance with conditions of banking registration

In its latest General Disclosure Statement released late on Friday, Westpac says it's "making good progress with remediating issues" that emerged in 2017 involving the bank using a series of capital models not approved by the Reserve Bank.

Separately, Westpac says it has identified non-compliance with its conditions of banking registration related to the Reserve Bank's Outsourcing Policy, or BS11.

Nah. Westpac is dominant to the extent we need extra special protection. It's failure would be catastrophic. Lets double the requirements RBNZ are seeking.

As they are the provider of the Crown Transactional Banking services, I agree with you.

This is the first bank that has kept the 18% target in their recommendations. Is the RBNZ grinding them down?

The small banks have all DUMPED the whole idea... double the requirement? HA HA It will all be dumped like the Capital Gains Tax as the RBNZ finds itself isolated.

Orr is a brilliant politician in waiting isn't he.. as per the comments above illustrate. How to get profile up.. unilaterally decide capital requirements need to be stronger because, hey, why shouldnt those pesky uber profitable banks be safer??!? What a guy for doing NZ such a service!! Never mind the fact that the RBNZs internal modelling/stress tests show the system is already safe enough, or the fact that they havent done nearly enough work to justify what they are proposing. Add to that the fact that they gloss over the costs to NZ'ers (heavy handed regs always have costs remember) and it all looks amazing!

Bravo I say.. policy on the fly that gives a good headline/head start in ones political career!