The RBNZ proposes to designate ANZ, ASB, BNZ and Westpac as systemically important banks meaning they'd have capital requirements above and beyond other banks

Banking
The RBNZ proposes to designate ANZ, ASB, BNZ and Westpac as systemically important banks meaning they'd have capital requirements above and beyond other banks

This comes in a consultation paper entitled A framework for identifying domestic systemically important banks. It covers the potential use of a domestic systemically important banks (D-SIBs) framework to identify New Zealand banks that might be subject to a capital surcharge as touted in the Reserve Bank's proposals to increase bank capital requirements.

NZ banks must currently meet a minimum total capital ratio of 10.5% of their risk weighted assets. The Reserve Bank is proposing to increase this to 18% for banks identified as systemically important, and 17% for all other banks. (See more on the Reserve Bank capital proposals in this three part interest.co.nz series here, here, and here).

A systemically important bank is one whose failure might trigger a financial crisis. Such banks are colloquially referred to as "too big to fail." The Reserve Bank has been using the "systemically important banks" term since before the global financial crisis. Its local incorporation policy, developed in the early 2000s, requires banks whose NZ liabilities, net of amounts due to related parties, exceed NZ$15 billion to incorporate locally.

"Local incorporation means that banks are subject to the full set of Reserve Bank prudential requirements, such as the requirement to hold sufficient capital in New Zealand. The local incorporation policy is part of a suite of policies that also includes the Outsourcing Policy (BS 11) and Open Bank Resolution (BS 13). These policies combined provide New Zealand authorities with the full range of distress management and resolution options so that decisions that are in the best interest of New Zealanders can be made," the Reserve Bank says.

The regulator says the lack of a framework for identifying D-SIBs leads to confusion when other similar terms are used to refer to banks that are of systemic importance. It notes the Basel Committee on Banking Supervision D-SIB framework uses four key indicators which are size, interconnectedness, substitutability, and complexity.

In a NZ context the Reserve Bank finds that regardless of the indicators selected, ANZ, BNZ, ASB and Westpac are dominant across all four categories of systemic importance with "an observable cliff effect" between their scores and those of other banks.

"The rankings of banks show that there is a significant step down in size between the big four and the others. The assets of the big four range from 18% to 32% individually as a percentage of the total assets of all locally incorporated banks. The figure for Kiwibank is less than 5%, while other banks are less than 2.5%. Relative to the domestic economy, the assets of the big four banks are equivalent to approximately 1.5 times that of New Zealand’s GDP, showing a similar pattern to Australia," the Reserve Bank says.

Given this it says the case for categorising the big four banks as D-SIBs "seems reasonably clear."

Total assets of all locally incorporated banks as at 30 Sep 2018. 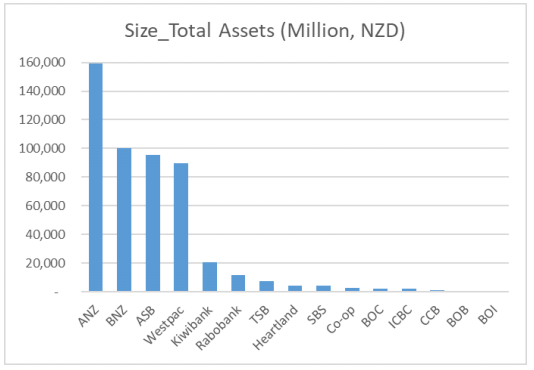 The Reserve Bank also mulls whether Kiwibank, as the next biggest bank, and Rabobank, which has more exposure to the rural sector than Westpac, should also be D-SIBs.

"Kiwibank has a significantly lower score than the big four, but it is nearly twice as big as the next bank. While significantly smaller, Rabobank has a bigger presence as a lender to the agriculture sector than Westpac. This raises the question as to whether Kiwibank and/or Rabobank should also be given the D-SIB label or a second tier of D-SIBs should be considered. An answer to this question requires a high degree of supervisory judgement," the Reserve Bank says.

"At this point of time, the Reserve Bank believes a single tier D-SIB framework would be simpler in practice. Moreover, the difference between these two banks and the big four is so substantial that neither of the two banks should be in the D-SIB category. However, it does show that both the framework and the list of D-SIBs should be reviewed regularly to confirm that they are still fit for purpose. The bucketing approach remains as an option for the regulator in refining the capital adequacy framework in future."

The Reserve Bank proposes not to introduce a threshold above which a bank automatically becomes a D-SIB. This is because a threshold would undermine the effectiveness of supervisory judgement, the dominant position of foreign banks and the cliff effect between the big four and other banks, any threshold would be arbitrary, and because supervisory judgement rather than an "arbitrarily constructed threshold" offers a better solution.

The Reserve Bank floats four options for identifying D-SIBs, and names its preferred option as an indicator-based framework.

"The explorative analysis confirms what has already been foreshadowed in the capital adequacy consultation, namely that the big four Australian owned banks [ANZ, BNZ, ASB and Westpac] would be classified as D-SIBs," it says.

"The method proposed for identifying D-SIBs in this consultation paper aligns with international best practice as recommended by the Basel Committee. The method uses an indicator-based approach across four dimensions: size, interconnectedness, substitutability, and complexity of banks."

Consultation on the framework for identifying systemically important banks closes on May 31. After that the Reserve Bank plans to publish submissions, plus a summary of feedback received and its decision on how it will proceed. 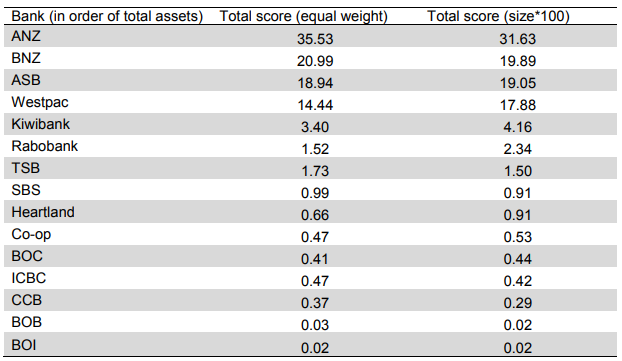 They still don't get it. This is about protecting the bank and the system, but again it is at the cost of the ordinary man on the street. You know - the one whose money will be used to bail the bank out with a haircut if they get into trouble. How about making the bank liable for their depositors funds, in full?

Could large banks not just restructure themselves into smaller constituent banks (probably along business lines) to avoid the penalty?

Presumably they would have some shareholder association/look through test to catch all entities with a common shareholding e.g. sister companies.

We've reached the stage where big is best in just about every other market. Where does big go from here? Share buy-backs of course. America is the same. All their big markets are substantially controlled by a handful of big companies with only the taking over China left to do. This is the result of successful capitalism over the years - the big keep getting bigger. It is still a better system than all the others, but every so often things will go pop. Don't be scared of pop. And don't always believe people when they say things like they're too big to fail. Nobody is too big to fail.

Yes Long John, share buy backs etc but its the result of too much liquidity, ultra loose monetary conditions, and too low interest rates that have enabled the big players globally to buy out the minnows, That's stifling competition, stopping healthy creative destruction, killing innovation and destroying productivity - there's a very good John Maudlin article out recently that makes alot of sense of the issue

This is timely, considering the Australian property market is plummeting and the big four banks have such huge exposure to mortgages in Australia and New Zealand. The potential bail-in situation in NZ is appalling, so anything that can be down to avoid the highly-unlikely-but-it-happens scenario is a good thing.

Glass-Steagall is on the table in Australia... separating the riskier parts of the banks from the core branch banking. Simply unpalatable that should the Banks get into trouble these banks will take their customers deposits to bail in and save the bank! I suspect most New Zealanders are completely unaware that their hard earned savings can be stolen in this way!

They all don't seem to be trying hard to get investors deposits right now with all the TD rate cuts. Going to have to move my money to get a decent rate at the ASB for 6 months.