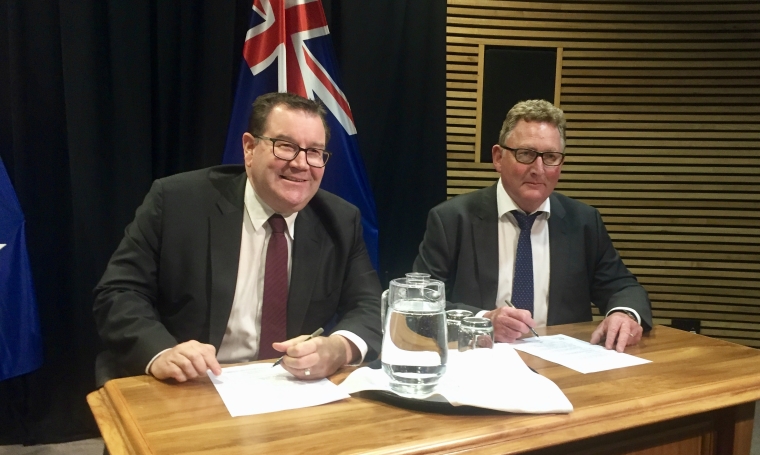 Former Reserve Bank Governor Don Brash says revelations there was a policy to write off specialist researchers who applied to be on the Reserve Bank’s Monetary Policy Committee are “utterly extraordinary”.

Documents released under the Official Information Act show Finance Minister Grant Robertson and the RBNZ Board agreed to take a “strict approach” to managing conflicts of interest when appointing non-RBNZ people to the committee.

Treasury, in a letter to Robertson outlined how this approach meant “excluding from consideration any individuals who are engaged in, or likely to engage in the future, in active research on monetary policy or macroeconomics”.

Treasury went on to say: “In future appointments to the MPC, looser criteria could be adopted that would allow for a broader field of potential nominees from the Board, if desired.”

A review of the Reserve Bank Act, led by Treasury, has meant that as of May 8 a committee made up of four RBNZ staff (including the Governor) and three “externals” has been tasked with setting the Official Cash Rate.

Previously this responsibility rested with the Governor, who traditionally also consulted with others on monetary policy decisions, but in a less transparent and formal way.

Being a scholar is different to working for Goldman Sachs

Brash - an opponent of the committee structure - said: “One would’ve expected the members of the MPC to be experts in monetary policy, or at least macroeconomics more generally. It seems quite extraordinary to exclude people who would have that kind of expertise…

“We haven’t had this precedent in New Zealand before.”

He accepted conflicts needed to be carefully managed, so bank economists couldn’t be appointed to the committee, for example.

“They would by definition be advising their employer on matters which were directly relevant to what the RBNZ might be deciding,” Brash said.

But ruling out academics doing research was a different story.

Alan Bollard, who succeeded Brash as RBNZ Governor until 2012, was less sceptical.

He made the point the appointment criteria could’ve simply been aimed at ensuring those with market interests weren’t hired.

RBNZ doesn’t want even a hint of a conflict; Robertson says it’s a balancing act

A spokesperson for the RBNZ explained the Board and Minister wanted “not even a hint of a whiff of any conflict of interest with appointees”.

Robertson admitted: “It was a difficult balance to strike and we certainly had conversations about where it should lie.

“The idea is that we want the person to be able to focus on the MPC work; that we’re not looking for a lot of public comment on that work.

“It’s where you draw the line between somebody’s professional working life and commenting on aspects of the economy or aspects of monetary policy that the Committee would be considering.”

Robertson didn’t accept the argument those with the skills to be on the MPC were the sorts of people highly likely to do “monetary policy” or “macroeconomic” research when their terms were up, and ruling them out would severely limit the talent pool.

Robertson said members having a good understanding of monetary policy was important, as was ensuring they have a range of backgrounds.

“Over time this will evolve. What I’m trying to say is that I actually have some sympathy with the view that we do want informed people on the committee. I think we’ve got that, but we do have to get a balance.”

The external MPC members include: Caroline Saunders - a professor of international trade and the environment and a director of the agribusiness and economics research unit at Lincoln University, Bob Buckle - a former pro vice-chancellor and dean of the Victoria Business School, and Peter Harris - a former Council of Trade Unions economist.

Conflicts are everywhere - can’t they be managed?

Brash, who after being Governor went on to be the leader of the National Party said: “I don’t think there were any circumstances where I had inside information about the RBNZ that put me in an awkward spot…

“I think that conflicts can be managed.”

Eric Crampton, NZ Initiative Chief Economist and critic of Treasury for not hiring enough people with economic expertise, likewise made this point.

He questioned why the RBNZ Board and Minister didn’t think a less prescriptive criteria could work – for example, restricting those on the committee against publishing work based on privileged information.

“New Zealand is small enough. It’s not hard to tell if somebody has been publishing things that they could only have known because of their participation in that committee. You could have ways of censuring people for having undertaken that kind of thing,” he said.

A matter of stress testing the RBNZ’s thinking… or not

Michael Reddell - who formerly held senior positions at the RBNZ including Head of Financial Markets - raised the issue in his Croaking Cassandra blog, off the back of the Official Information Act request he made.

He referenced an unsuccessful candidate he knew of, who would’ve had the expertise to challenge the RBNZ members of the committee on technical monetary policy matters.

Reddell concluded: “One of my longstanding concerns about the new regime would be that it would largely replicate the dominance the Governor had in the old legislative model…

“A really strong Governor might encourage diversity of perspective and challenge. There has never been any suggestion Adrian Orr is that sort of person, indeed rather the contrary.

“And the external members are appointed [by the Finance Minister] on the Board’s recommendation, but... the Governor himself is a member of the Board.

“And instead of distancing himself from the process, and leaving recommendations to the non-executive directors, the Governor was one of the three-man interview panel for the external MPC nominees.”

Reddell said the RBNZ Board and Finance Minister’s conflict of interest criteria, “presumably aided and abetted by the Governor”, would disqualify New Zealand versions of the Federal Reserve’s former chairs, Janet Yellen and Ben Bernanke.

The RBNZ spokesperson concluded: “Looser criteria could be adopted in future. Criteria could (not necessarily would) change if the Board and Minister saw value in having a different mix of skills on the Monetary Policy Committee when the next appointments are made, but that’s a hypothetical bridge to cross in the future and not something the Reserve Bank would speculate about now.”

".. write off specialist researchers who applied to be on the Reserve Bank’s Monetary Policy Committee ..."

unless of course employed by the RBNZ... or do Messrs Orr and Hawkesby and Ha also qualify as not having the foggiest understanding of monetary policy.

I agree.. this is daft... this is not how you manage conflicts of interest. You disclose them, monitor them and manage them by mitigating as best as you can.... don't refuse to hire someone because you don't feel like managing any potential conflict.

I get why Orr doesn't want any externals challenging him by its simply embarrassing that Robertson didn't see through that.

This is like the Catholic Church saying that any students of Galileo can't participate in Sunday mass on the suspicion of heresy. Hey! If you thought we were a secular nation turns out our most powerful religion is Monetary Policy!

Excuse all potential conflict of interest eh? That would be an empty room as no one is fully objective. Laughable

this is getting shadier by the minute. the rbnz is supposed to be independent of the government. The fact this government now has a political appointee is dodgy to say the least. Now they want a "closed shop". Orr should do the honourable thing and resign.

Things are not good at the RBNZ.
They've had a revolt in the research teams. Word on the street is that it has something to do with this, along with a directive to, effectively, rid it of all specialist researchers.

According to Mike Reddell, they wanted a female. This policy helps you get there.

Article just sits up and begs for the video (and it's not even Friday yet):

If you're the MPC, where are your Experts?
Experts?
We ain't Got no Experts!
We don't Need no Experts!
I don't have to show You any Steenkin' Experts!

This cautionary video clip, linked here, should make us all more concerned where we are headed in respect of exercising public political control over central bank power.

So in other words, the only people they can hire are the ones so useless and untalented that nobody else wants to hire them? I can see why this country is going down the gurgler so quickly.

No one has suggested they are "useless and untalented", they just don't have macroeconomic or monetary policy credentials - which is still a serious issue. The MPC is not a general governance body as the RBNZ already has a Board. Rather, the MPC is intended to challenge the Governor and add diversity of debate. This policy ensure that the MPC will sit on the sidelines, make no public speeches and won't rock the boat.

This is just so depressing. Wish we had Minsters with even half a clue as to how to run the country running the country.