Inflationary risks are rising, but NZIER Shadow Board agrees the Reserve Bank should hold fire before raising interest rates

Inflationary risks are rising, but NZIER Shadow Board agrees the Reserve Bank should hold fire before raising interest rates 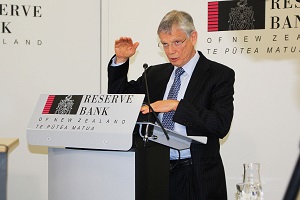 The New Zealand Institute of Economic Research’s (NZIER) Monetary Policy Shadow Board is cautioning the Reserve Bank from rushing into raising interest rates.

The nine business leaders, economists and academics on the Board have solidified their tightening bias, but maintain the RBNZ should keep the Official Cash Rate (OCR) on hold at 1.75% when it is reviewed on Thursday.

“Downside risks from global developments suggest the Reserve Bank should adopt a wait and see approach, with any tightening likely to be some time away.

“Inflation is picking up from a low base and with capacity pressures expected to broaden beyond the construction sector, we expect the Reserve Bank to keep the OCR on hold until mid-2018 before embarking on a measured tightening cycle.”

Grimes says: “Inflation is comfortably within the target band for the near future so there is no immediate pressure for an OCR change. Longer term, a rise in interest rates from current low levels will be required, and it would be useful to start conditioning expectations of a future increase.”

Meanwhile Toplis goes further to say: “While we can see why the cash rate might be kept where it is we, equally, [we] do not share the central bank’s view that risks to the outlook are evenly balanced. We believe inflationary risks are rising and that conditions thus warrant a formal tightening bias.”

Westpac acting chief economist Michael Gordon on the other hand says: “Inflation will be boosted by some temporary factors in the March quarter, but is still more likely to linger in the lower half of the target range over the next year. There is no urgency for the RBNZ to reverse its recent OCR cuts.”

MYOB general manager Carolyn Luey is also less in favour of tightening, saying: “We think the RBNZ should hold the OCR, even though the economy is going well and inflation is ticking up. Borrowing costs for SMEs are starting to rise as banks pass on lending costs, plus dairy prices have dipped.”

Kiwibank chief economist Zoe Wallis says: “The domestic outlook for the NZ economy remains robust and inflation is now comfortably heading up towards 2%. However, numerous international risks on the horizon warrant a cautious approach toward eventually lifting the OCR.”

NZ has very high interest rates already especially compared within the OECD.
Auckland has a reasonably high proportion of highly leveraged households with very large mortgages due to the flood of offshore foreign- related property buyers driving up house prices - this will be a consideration as banks lift interest rates higher.
Is there any demand-driven inflation really?
And who cares what the OCR is anyway? - it has disconnected from what banks charge in their interest rates.

the neoliberal drivel see's no difference between local and offshore also the reserve banks job is to contain inflation within the model derived number of 1% to 3% inflation.

What does their model say then?