Westpac senior agri economist Nathan Penny says the tourism, seafood and export education sectors plus gold kiwifruit exports are most at risk if our trade relationship with China was to change

Business
Westpac senior agri economist Nathan Penny says the tourism, seafood and export education sectors plus gold kiwifruit exports are most at risk if our trade relationship with China was to change 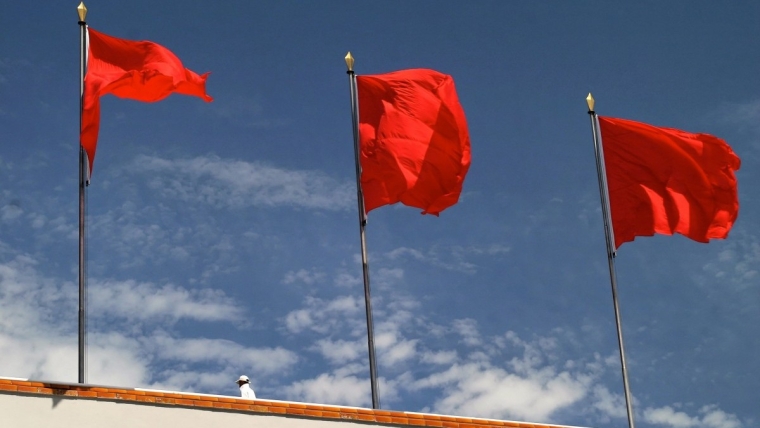 The tourism, seafood and export education sectors plus gold kiwifruit exports specifically have "high exposure risk" in the event of any change in our trade relationship with China, Westpac senior agri economist Nathan Penny says.

However. on the flipside, the wine and dairy sectors have low risk exposure, Penny says, in a paper analysing New Zealand's China exports.

Penny says it's unsurprising NZ exporters have tapped heavily into China's big and highly profitable market since we signed the Free Trade Agreement (FTA) with them back in 2008. China is now comfortably our largest export market, accounting for the largest share of our exports in all but a few sectors. 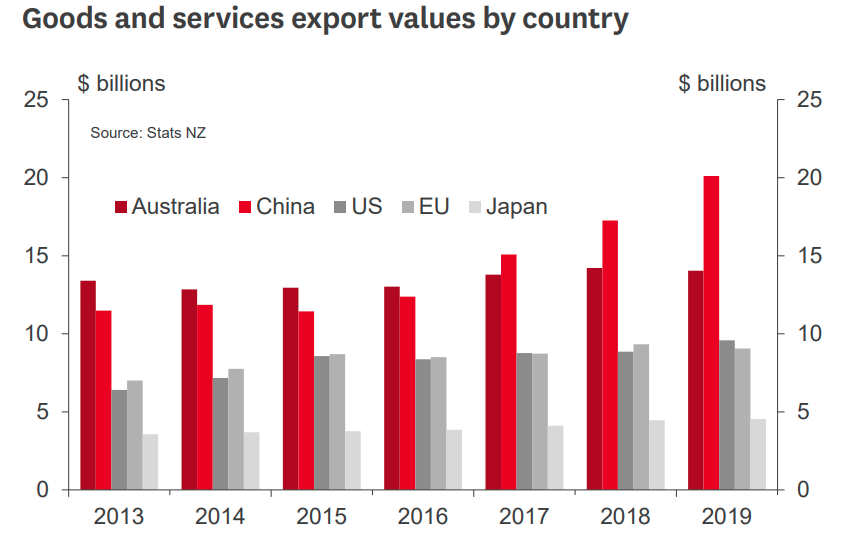 "But as exporters have shifted focus to China, New Zealand’s exports have become less diversified. This concentration comes with risk and thus a trade-off with potential profits," he says.

He notes that in recent years, China has in some cases restricted access to its lucrative market in order to advance its wider strategic interests.

"At times China has used border delays, decertification, social media influencing campaigns, and official statements in order to impact trade in particular products and from particular countries. Furthermore, the trade rules that New Zealand businesses operate under in other markets are not necessarily relevant nor enforceable in China, and breaches of intellectual property rights have occurred."

So, what if the trade relationship between our two countries changed and China chose to influence New Zealand trade flows? 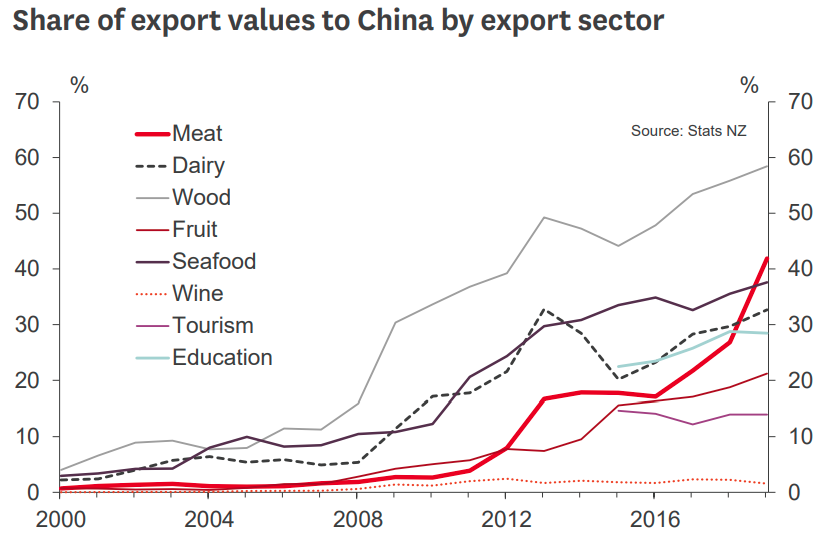 "Importantly, the risk is not simply a question of how much a sector exports to China. We believe the more relevant questions are how strategically important is New Zealand’s export supply to China and/or how readily China can source supply from either other countries or domestically."

"By and large, the complementary nature of our trade relationship means New Zealand’s risk exposure is less than the outright level of exports would suggest. Put simply, Chinese needs our food (and wood) as it cannot produce enough (efficiently) on its own. Similarly, New Zealand will continue to source much of its manufactured goods from China, while China remains the most competitive supplier," he says.

However, China is "not without options".

"Where it does have options New Zealand export sectors face greater exposure risk. And the sectors with the highest risk are those that we also classify as neither strategic nor essential."

Taking all that into account, he assesses that tourism, seafood and gold kiwifruit specifically have the highest exposure risk to China. Export education (university and English language school sectors) also faces high risk, while he places meat, wood and fruit (excluding gold kiwifruit) in the medium exposure risk bracket. The dairy and wine sectors have the lowest risk exposure in his view. 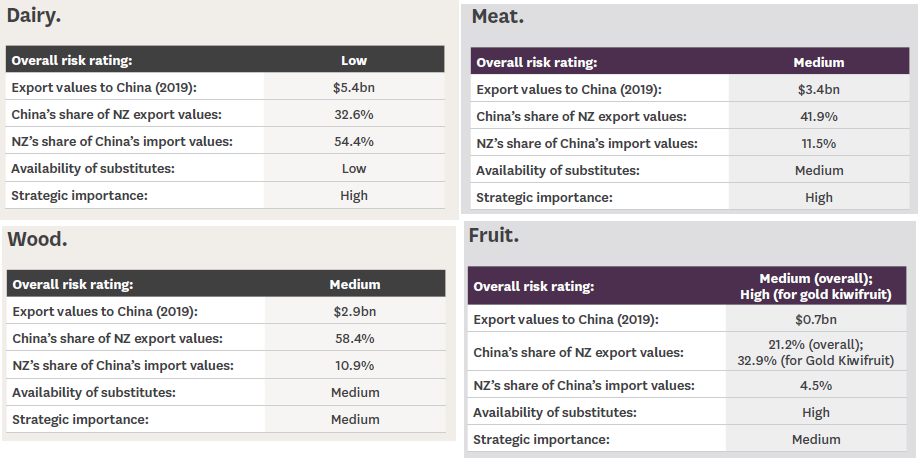 On the high earning dairy sector and the judgement that its exposure risk is "low", Penny says this judgement is largely based on the fact that China is very dependent on New Zealand dairy imports.

"In 2019, New Zealand accounted for over half of China’s imports. In other words, China has very few other options available to fill its dairy production deficit. On top of this fact, dairy is a strategic food for China, with few direct substitutes."

"Notably, several Chinese agencies, including the Chinese Centre for Disease Control crafted guidelines aimed at lifting dairy consumption in a bid to lift public health and immunity levels amid the Covid outbreak. Also, China’s dairy industry is struggling to keep up with domestic consumption growth, meaning that imports will continue to play an oversized role in meeting dairy demand."

He says these struggles may be due to China’s competitive disadvantage in dairy. Anecdotally, production costs are in excess of NZ$10 per kg of milk solids compared to New Zealand’s average cost of circa NZ$6 per kg. More broadly from a protein perspective, China is a relatively efficient (low cost) producer of pork and chicken, and thus over the long term it is likely to focus its scarce agricultural resources (land and water) on production of these instead of dairy. Similarly, Chinese dairy production suffers from a poor reputation in terms of food safety and quality.

"The Chinese government is acutely aware of these facts and products like infant formula are often regarded as essential household items. Thus any disruptions to supply potentially could be a social and political flash point that Chinese officials will be keen to avoid."

At the other end of the scale and the tourism sector, which Penny judges to have a  "high exposure risk to China", he says while China only accounts for around 14% of tourism export values, it has been one of New Zealand’s fastest growing markets and Chinese tourists are relatively high spenders once in New Zealand. 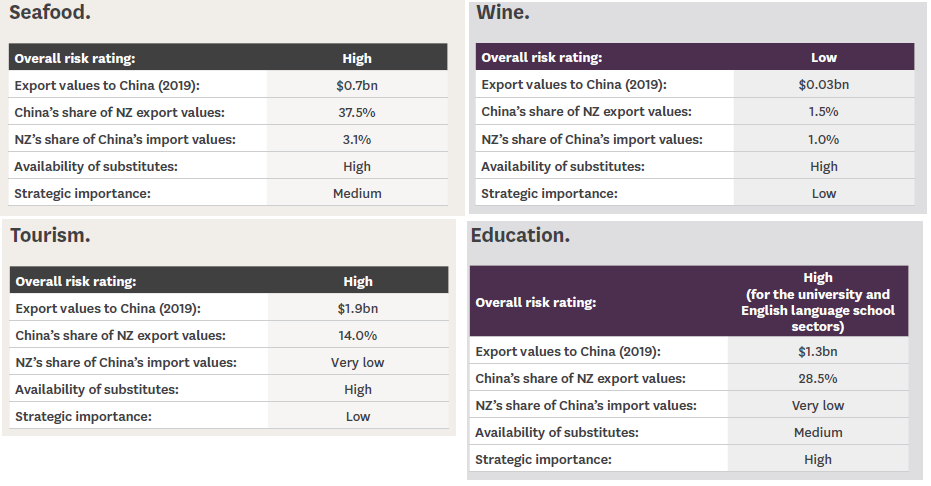 "Moreover, New Zealand is a very small niche market compared to tourism heavyweights such as France, Spain and the US.

"In other words, Chinese tourists could comfortably fully divert away from New Zealand to any number of destinations globally. In addition, tourism has little strategic importance as it is a luxury or non-essential."

On the similarly exposed education sector, Penny says the New Zealand university sector is a small player in a very large market, dominated by heavyweights, the US and UK.

"Of the top ranked universities globally, five and four of the top 10 are located in the US and UK, respectively (QS World University Rankings, 2020). For an indication of New Zealand’s relatively modest standing globally, only Auckland University is ranked in the top 100 (83rd equal), while another three (Otago, Canterbury and Victoria) are ranked inside the top 250. This makes New Zealand education readily substitutable," he says.

"Chinese students make up the lion’s share of students in this sector. The primary and secondary school sectors plus tertiary providers other than universities are less reliant on Chinese students and therefore less exposed."

Why should anyone put NZ's relationship with China at risk?

That is the question.

Wrong. To be, or not to be. That, is the question.

Ah, but would China put it at risk?

China has shown they are very happy to put trade relationships at risk to punish the behaviour of states they disapprove of. Australia for example, after leading the call for an independent inquiry into the origins of Covid-19 saw itself quickly slapped with 80% tariffs on barley but not on iron ore, which China cannot reliably source in the volumes it needs it elsewhere. The above 'high' risk sectors may face the same treatment in the future.

The thing about free and open democracies is they have a tendency to call out outrageous human rights/election/free press etc.. violations elsewhere, something that the Chinese government is currently doing with it's genocide in Xinjiang, activities in Tibet and it's violation of the Sino-British treaty recently in Hong Kong.

Naturally authoritarian regimes like the CCP's don't take kindly to criticism from free parts of the world and in China's choice the retaliatory weapon of choice is trade.

Suspect our food would be grey marketed through alternative channels regardless. They have a big food shortage atm. Pig flu and crop/flood damage. Unless they want more of the wealthier chinese (who can afford our food) to starve why would they?

Can one trust China and it leaders.

Many countries are realising the risk of dealing with China and its agenda so best to stay away and can still do business with them on a one to one level. The moment they try bully or dictate & $#@ them.

Fonterra has just sold its Chinese holdings, a good moove

Unfavorable Views of China Reach Historic Highs in Many Countries

https://www.pewresearch.org/global/2020/10/06/unfavorable-views-of-chin…
(You have to chuckle at the Italy graph. 2/3rds of Italians never liked China and they came down with Covid19 the hardest. Karma; or were they just wise?)

Interesting charts, thanks for sharing.

Politicians in France, Spain and Italy are, on the one hand, pushing forward joint initiatives with Chinese businesses (OBOR, 5G) ignoring their public's increasing skepticism regarding the regime (clearly inseparable from Chinese businesses), and then on the other hand are perplexed with rising moment of nationalism, anti-incumbency and distrust towards the government in the continent.

This is an interesting subject. In my view, CCP has the absolute power to decide to stop importing foods from the entire 1st world (it will be the same for tourism and international education). The Chinese people won't have a choice but will have to eat 3rd world imports if it happens. The risk is always on the ramification in the decline of living standard, and it is a sensitive political subject in China.

This is an interesting analysis by Nathan Penny with which I largely agree. But the perspective right at the start is an observation that "it's unsurprising NZ exporters have tapped heavily into China's big and highly profitable market since we signed the Free Trade Agreement (FTA) with them back in 2008". The reality is that to a large extent it was the Chinese importers who came to our door here in NZ. As New Zealanders, we have had to do very little to develop the Chinese market and when we have attempted to get close to the consumers we have tended to mess it up. Let there be no doubt; they came to us. And the reason they came to us was in major part because the signing of the FTA was taken as a signal by the commercial entities that at that time the Government of China regarded NZ as a reliable trading partner. To a large extent, that in turn was a consequence of the Chinese Government making an assessment, based on historical behaviours, that NZ, although aligned to the Western Aliance, would not play political games.
KeithW

I am beginning to wonder if the Winter Olympic is a goer now..

Chariman Moa
Possibly not, but that will depend on whether COVID-19 extends to 2022.
Or more specifically whether or not countries can get their training prior to the Olympics.
If NZ opens its borders by mid 2021, then NZ (and Chilean) ski fields will be fulll of overseas teams in training for the Winter Olympics.
The notion of some countries boycotting Olympics for political reasons is not new, but in each case the Olympics themselves have gone on.
KeithW