Statistics NZ says September was the third record month in a row for imports, with the figure reaching $6.6 billion - up 30% on the same month a year ago

Business / news
Statistics NZ says September was the third record month in a row for imports, with the figure reaching $6.6 billion - up 30% on the same month a year ago 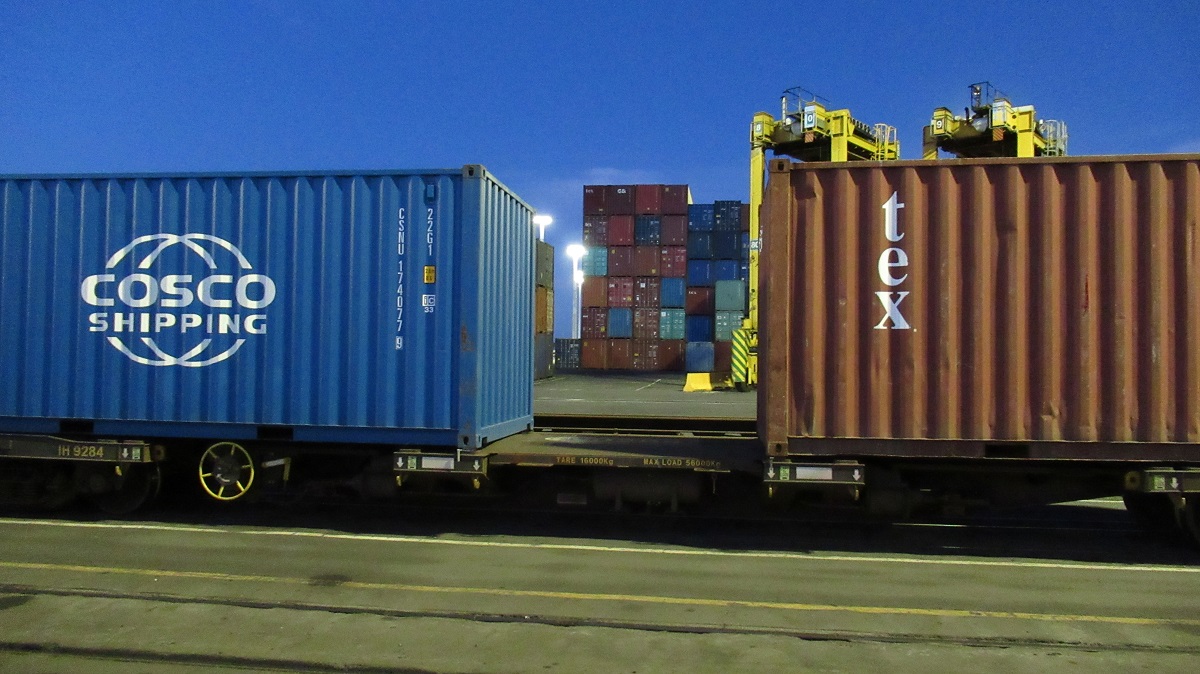 A third successive month of record imports has pushed New Zealand to a record trade deficit.

The exports figure was $387 million higher than a year ago.

The annual trade balance for the year ended September 2021 was a deficit of $4.1 billion.

"These three consecutive record months for imports are a reflection of both the higher prices New Zealanders are paying for consumer goods, and strong demand for capital goods such as machinery used in construction, and passenger vehicles," Stats NZ's international trade manager Alasdair Allen said.

The largest contributor to the rise in imports was again vehicles, parts, and accessories, up $269 million (43%) compared with a year ago to $895 million.

On the exports side, dairy products have been a star. Giant dairy co-operative Fonterra on Tuesday raised its forecast payout to farmers for the current season to an implied record-equalling $8.40 per kilogram of milk solids up from $8 previously.

Exports of milk powder, butter, and cheese were up $128 million (17%) in September, reaching $904 million. The largest contributor to this rise was milk powder, up $64 million.

"We've seen a strong start to the export season for milk powder, butter, and cheese, this month having the highest value for exports for any September month since 2013," Allen said. 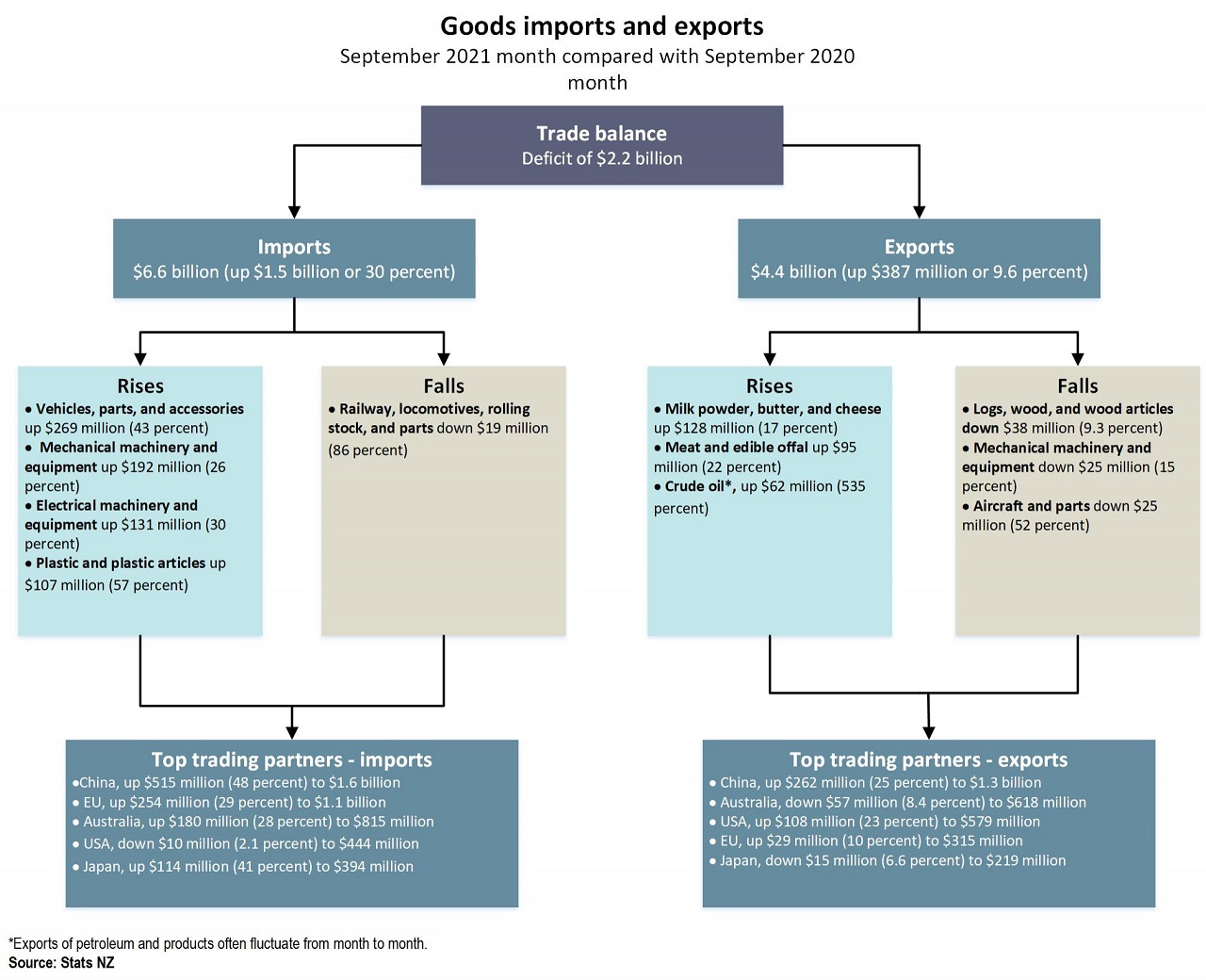 Jacinda keeps saying we are a small trading nation, the above seems to suggest we suck at it.

Some keep saying that NZ is chronic debtor nation, that is slowly selling its silverware to maintain a lifestyle that maybe it thinks its entitled to.....

Don't worry they will be able to sell our water assets soon, when they have got their hands on it.  Either that or the Chinese will take possession of them when we inevitably default on the $180 billion loan.  A classic banana republic move.

It will be interesting to see if the odd billion or two fall off the table and "disappear".

Not surprised, our housing market had a 30% gain last year along that made us become fourth richest in the world. Thanks to our RBNZ's printed money. You wonder why everything is expensive now...

Well, this is what tends to happen when successive governments and the RBNZ only pay attention to the housing Ponzi and not to the real economy. Rather than a productive, exporting nation we risk becoming a giant housing Ponzi supporting a minority of parasitic, unproductive housing specuvestors.

I thought there was supply chain blockage? Looks to me like we're just importing more. Though I do not the stats are value not volume.

We're importing the same amount, but spending 4 times the cost.  It does not take much for the dollar value of those imported goods to get higher. We've lifted selling prices almost 30%, local suppliers mostly have lifted costs by at least 25%.  Can't see this being resolved inside of a year, and also can't see it returning to the old prices, we won't.

CPI at 5% is nothing, wait till the real inflation rate shows up.

This Govt will have high tailed it to the U N when the S--- hits the fan.

Damn. Annualised freight charges $30m? Are you Toyota or the owner of BMW? That overhead must be one of the largest in the country.

What is shows is we are still spending like there is no tomorrow, which under Labour is probably true.

What else you gunna do in lockdown. Read a book the whole time? Only putting it down to diligently home school my kids or attending our daily covid sermon?

Actually I need to buy the book first (opens amazon)

Hear! Hear! We need to open the whole country now - everybody has had more than ample time to get vaccinated.

This Government has well departed from rationality in prolonging this lockdown.

Tourism used to be an export earner... Up 20% of our exports

Who needs tourism ? Or a real economy ? Or an export sector at all ? Let's just keep selling houses to each other - isn't this the best way to get rich ?

It'll be interesting to see the breakdown what in the world are we importing from Europe. The deficit generated from the European trades accounts a staggering 53.9% of all deficits in the top 5 import-export country list.

Are we buying discounted submarines from the French?

The top 5 container lines control 65% of global trade volume. The next 5 in the rankings control another 20%. So the top 10 control 85%. They have quietly merged and consolidated with their competitors to build market share. Worldwide anti trust exemptions allow these companies to form route and vessel sharing alliances on key trade routes that control capacity and price. They have created a very effective monopoly with a huge moat around it.

Container lines are the OPEC of the 2020's. Something that was cheap and plentiful (containerised freight) that everyone took for granted is now scarce and expensive (like early 70's oil). The shipping lines will use their market power to keep it that way for as long as possible.

Grant Robertson:  We're tracking better than planned, everything is just rosy, Nothing to see here..........

So despite record agricultural earnings and inflation propping up the economy, the inbound costs are more than the import gains.  I can't see how this is going to end well.  Shame Robertson is still in denial and isn't taking steps to control unnecessary spending.