Auckland spending has bounced after the loosening of Covid restrictions, but services spending is still well down, according to Kiwibank credit and debit card data

Business / news
Auckland spending has bounced after the loosening of Covid restrictions, but services spending is still well down, according to Kiwibank credit and debit card data 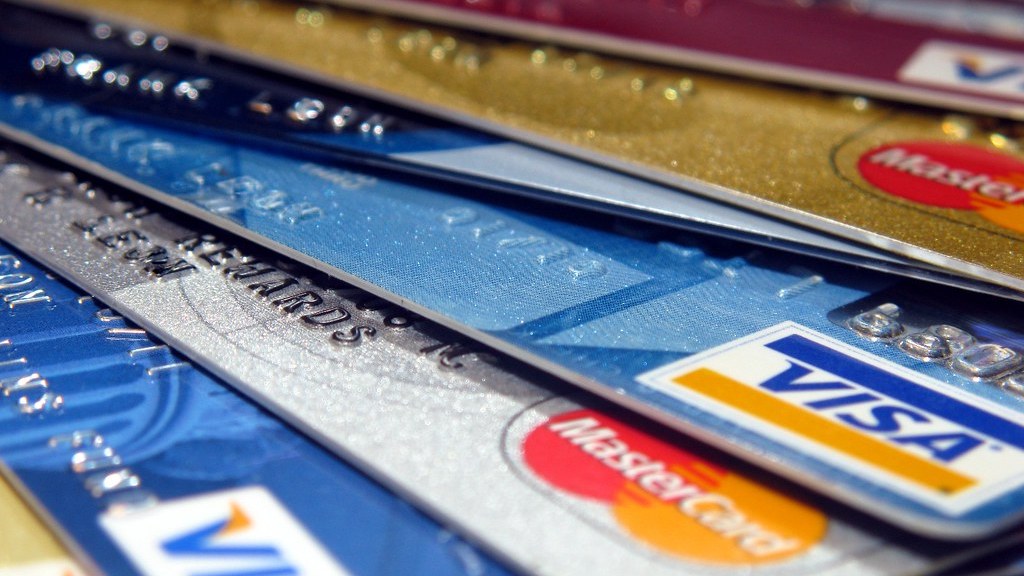 Auckland retail spending has lifted after the loosening of Covid restrictions in the country's largest city, but at a regional level the spending picture is "mixed", Kiwibank economists say.

In the latest release tracking spending of Kiwibank customers, Kiwibank chief economist Jarrod Kerr, senior economist Jeremy Couchman and economist Mary Jo Vergara, say outside of Auckland, the Waikato and Northland, most regions are "enjoying the freedoms of Level 2". 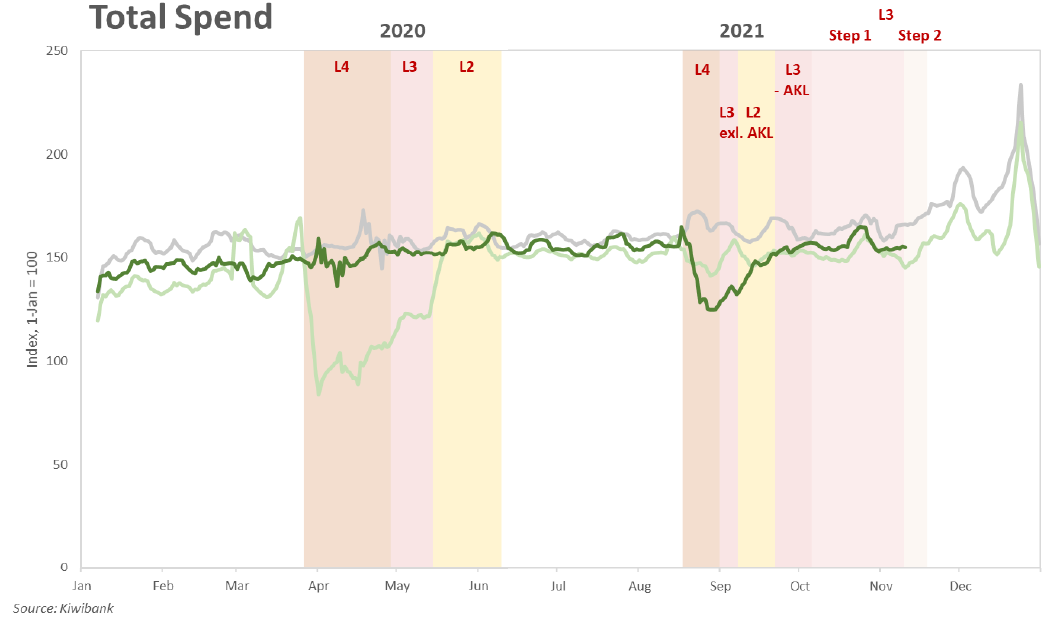 "Spend in most regions has lifted to above pre-Delta lockdown levels," they say.

Spend in Auckland is still down 2.2% as restrictions have "dragged on".

"However, the move to Level 3, Step 2 has allowed more activity to take place. And down 2.2% is a significant improvement from being down 14% while at Level 3, Step 1."

The economists say that "impressively", spend in the Waikato region is above pre-lockdown levels despite parts of the region experiencing the same restrictions as Auckland. 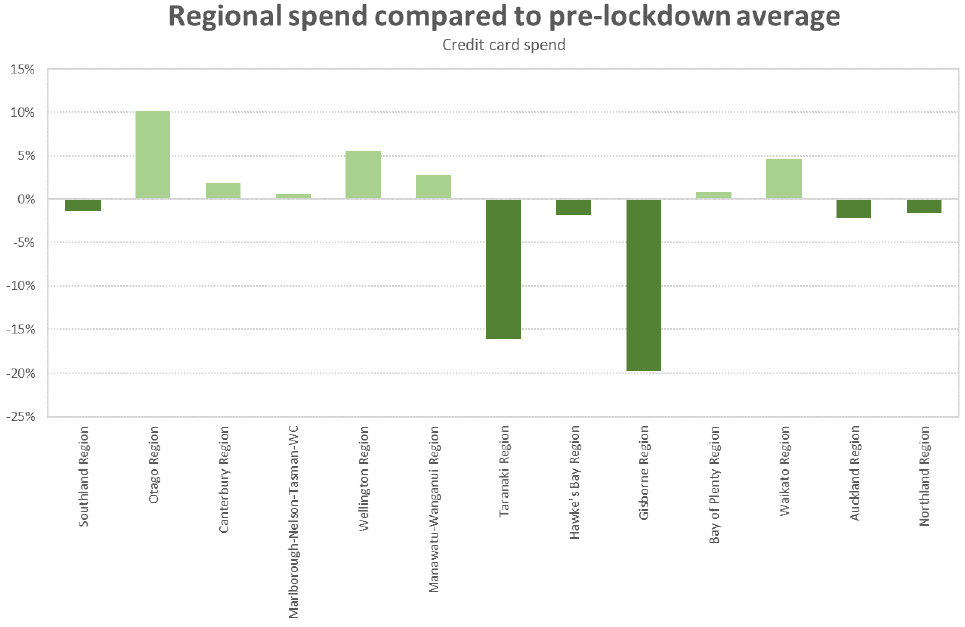 "Greater spend in Auckland and continued spend elsewhere has seen a lift in overall spend. Total Kiwibank credit and debit card spend rose 8% since Auckland’s move to Step 2. Spend on goods has increased 10%. But given depressed spend on services in the largest city, total services spend is also yet to return to pre-Delta lockdown levels, down 13%."

The economists say that "after a sharp drop" in the country's third-quarter GDP they have pencilled in a rebound of around 8.5% in the fourth quarter of 2021.

"However, with Auckland spending all of October in some form of lockdown, there’s growing downside risk to our forecast.

"While our spending data and several leading indicators suggest that underlying demand is solid, Covid is still calling the shots for the economy, near-term. So long as lockdowns are part of the playbook, large swings in economic activity are to be expected."

In terms of Auckland consumer spending, the economists say this was "jolted back into action" once the region stepped down into Alert Level 3, Step 2. 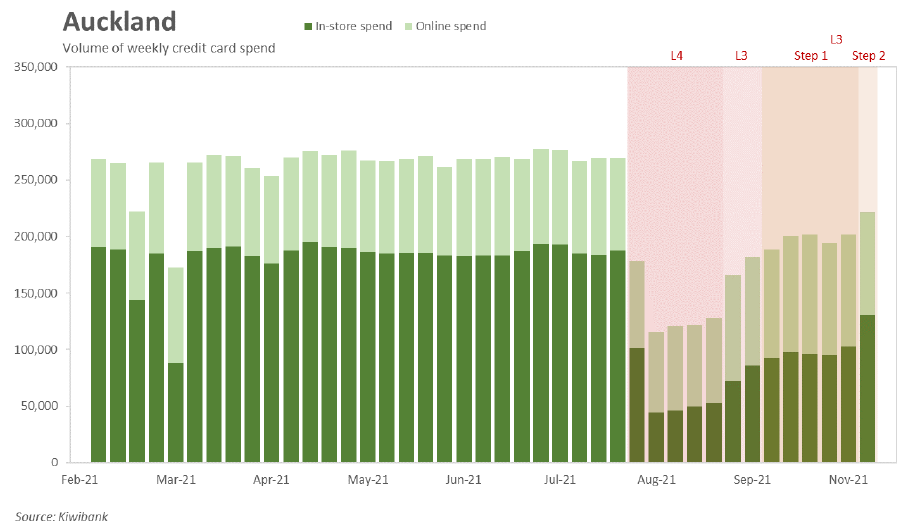 "After three months, the malls are open for business, but still with restrictions in place. Masked shoppers are keeping their distance and the smell of sanitizer permeates the air. The loosened restrictions have seen an immediate increase in in-store spending. Within Auckland, the number of credit card transactions rose 35% over the first five days at Step 2, with the value of spend rising 62%. And as expected, Department Stores were the big winners from the change. The doors among retail services however remain locked, with close-contact service still off the cards.

"The rise in in-store spend however was slightly offset by a drop in online spending (10% drop in both volume and value). For some respite from endlessly staring at screens, shoppers have taken their shopping to the streets. In aggregate, the value of total credit card spend in Auckland is up 14%."

The economists suggest that with Delta continuing to spread within the community, "some [people] may still be feeling anxious to step outside".

"Physical shopping may also be less attractive given our strengthened familiarity with ecommerce. Throughout lockdown, online spending surged, and is the main reason why the drop in overall spend was much shallower. However, it’s still early days. And footfall will likely increase over the coming months, especially with Christmas fast approaching. The sparkle of tinsel, sound of Sinatra and photo op with (a masked) Santa may entice more to shop in person."

I wonder if NZ will experience a mass lay-off post Christmas- it'll be an irony while the rest of the world is grappling with "mass resignation".

Wait till next year with rising mortgage rates and people cutting their discretionary spending .

Ironic that spending is already down but inflation is way up.