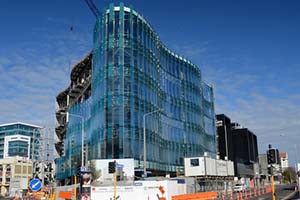 We are going to have to stop relying on the $35 billion Canterbury rebuild to prop up our economy, sooner than expected.

A Westpac report released today on how the rebuild is progressing reveals reconstruction spending has reached a peak, so isn’t going to provide the same sort of boost to growth and employment as it has in recent years.

“We expect that rebuild related construction activity will continue around the current strong levels over the next year or so, before it starts to gradually wind down from about mid-2016”, says senior economist Satish Ranchhod.

“That doesn’t mean there will be absolutely no further increase in activity. In fact, we are continuing to see new residential and non-residential construction projects being announced.

“But the boost from this new spending will be much more modest than what we’ve seen over the past few years.”

This means the rebuild won’t add materially to economic growth over the remainder of this year or in 2016, and will detract materially from growth starting in 2017.

The Canterbury slowdown, coupled with yesterday’s disastrous GlobalDairyTrade auction and release of softer than expected inflation figures, has prompted Westpac to revise its Official Cash Rate (OCR) expectations for the end of the year down to 2.0% (previously 2.5%).

It forecasts the Reserve Bank will reduce the OCR, which is at 3.25%, by 25 basis points when it’s reviewed on Thursday. It expects the Governor to slash another 50bp in September, 25bp in October and 25bp in December.

Rebuild has “crowded out” other economic activity

Ranchhod explains, rebuild activity has boosted demand and employment in related industries around the country, including professional services such as architecture, and manufacturing.

“This is likely to pass through to softer employment and spending in the economy through the latter part of the decade”, he says.

However Ranchhod can’t pinpoint how strong or weak the economy would have been in recent years if it wasn’t for the rebuild.

He says, “The increases in demand associated with the rebuild pulled in resources from other parts of the economy.

“In other words, the rebuild crowded out economic activity that would have otherwise occurred.”

Ranchhod says a 20% decline in residential building consents issued in the early part of the year indicates residential reconstruction is starting to ease back.

“Such a softening in activity is consistent with our talks with builders in Canterbury that have highlighted waning demand for new subdivisions”, he says.

However a pick-up in non-residential construction has offset this slow-down to some extent.

There’s been a 20% increase in non-residential building activity and a 45% increase in building consent issuance over the past year.

While these non-residential projects initially took a while to get off the ground due to their size and complexity, he says construction activity will continue to increase for some time and that work will have a long tail.

However, Ranchhod expects the amount of commercial reconstruction work will ultimately be at the lower end of announced estimates.

“This is because the economic incentives for new commercial construction have moderated over time. There has already been a large amount of commercial office space built in recent years, and many tenants are now locked into long-term leases.

“At the same time as supply has been increasing, construction costs have risen sharply, pushing up the nominal returns that new projects need to generate in order to deliver an adequate yield to investors.

“In light of these conditions, it is likely that some projects will not be economically viable at the current time.

“As a result, some projects will be delayed until economic conditions are more conducive, while some other projects are likely to be cancelled.”

" the rebuild crowded out economic activity that would have otherwise occurred.” What would that have been, Satish?

In Christchurch the shortage of commercial space and increased wages would have prevented, a lot of organic growth. Businesses always fail and others start up. Christchurch would have had usual failures in non-construction industry, but few start ups in non-construction sector. For example if you wanted to open a manufacturing business not related to construction would you have established it in Christchurch with the shortage of commercial space and a labour shortage or gone elsewhere to set up. Christchurch will have missed out on a good chunk of 5-6 years of organic business devlopment. And once construction winds down will effectively have less local industry than previous, and an oversupply of housing. Classic Ireland syndrome build and over build as have to house all the workers, which needs more houses and so on. Then all the workers leave and have a housing oversupply, and a property bust.

Agree. I think Chch will feel the impact of the EQ for many years yet. Insurance for your business will be high if you can get it, rates will be high and you lose the population your staff or customers. Infrastructure installation and materials is now expensive making it less economic to expand. Businesses that have moved out simply have no real reason to return some probably even went to OZ. On the wages front I think Chch was/is a poorly paid town. I looked at a few jobs there over a decade but would have had to take a 30% cut to move there (my wife's a mainlander and its her uni town), as it turns out thankfully I didnt.

Theoretical any major change should have seen a boom time in support and follower style business from the money being poured into the location, and the potential for work.

Could be the workers have done what foreign labour does, and just banked the money or sent it home.

Or perhaps the demand for housing soaked up everything disposable? (doubt it, as that usually leads to further spending).

OR the demand differential was so mismanaged that it soaked up or diverted any real market activity (eg by enabling slow payment by insurance entities, by chasing local development off, or by discounting any real margins to be injected back into the private sector, or from government pocketing all the profits through compliance measures.)
Big development always cause stimulation, so why this one not so much eh? Gubbermeint

At the same time as supply has been increasing, construction costs have risen sharply, pushing up the nominal returns that new projects need to generate in order to deliver an adequate yield to investors.

This is exactly the issue with the Gubmint-led CERA and CCDU stewardship of the Old CBD (which is now largely tumbleweeds). The bureaucrat-moderated 'recovery' has had the following characteristics and effects:

- the enforced lock-down of the Old CBD kept many businesses away from their records, premises, inventory and tools of trade. They either restarted in the absence of all these (but still locally), threw in the towel, or decamped entirely. Many will never come near the Old CBD again because of the frightful treatment they received.

- Bureaucrats have zero notion of the time value of money,so delays and the pursuit of Perfect when Good would have sufficed, has blown up all original cost estimates. Construction cost inflation is 8-12%, so something costed at $200m in mid-2011 will be $322 in 2016 at 10%. This factor alone explains most of the so-called 'anchor project' kerfuffles.

- In taking control of the Old CBD, the earnest gray suits left open the possibility of Going Elsewhere, out from under their cold dead hands. This is precisely what happened: the New CBD (Sydenham/Addington/Middleton/Riccarton/Hornby/Airport arc, plus the Oxford Terrace to Bealey Ave strip in general and Montreal/Victoria street especially) has boomed and most non Gubmint firms have moved there. Or much further afield (iZone, with no DC's http://www.izone.org.nz/why-izone/no-development-contributions/) and other towns and cities altogether. This has left the potential commercial tenants for the Old CBD countable on a sawmiller's left hand.

- The City Council has contributed its mite to the whole debacle by firstly getting itself un-accredited for consenting (more bureaucracy, shocking turnaround times) and then running out of both political will (never in high supply) and cash. Perfect storm all around. Natural reaction for many firms was to move to other jurisdictions (take a look around Ashburton, Rangiora) where less overall Council stupidity was on display.

Correct Waymad, but worse is still to come as there is a definite office oversupply even before most planned projects are complete.

There is very little demand for space in the CBD and anyone proposing new offices right now must have lost the plot.

Whether retail can get off the ground is going to be debatable too.

There is limited demand for residential too, and certainly competing with Fletchers who have been gifted cheap land is going to force others to reconsider.

Hospitality demand is limited too.

So what is the hope for the CBD? CCDU, Warwick Issacs, Gerry Brownlee and Roger Sutton utterly crushed any hope of recovery by not listening to property owners, moving forward with knock down plans for everything even if it was undamaged! And by in large being so aloof and out of touch with reality, and only taking advice from planners such as Don Miskell whose track record in the development of Pegasus town speaks for itself, that it was inevitable the tumbleweed city would be the result.

It is a shame that bureaucrats (and apparently politicians too) can't be held to any account. They simple move on to find the next disaster to create.

At least with business people then are made bankrupt and restrained from business for a period after even the slightest balls up. Bureaucrats and politicians can cost us billions, yet if it was just stupidity and arrogance causing it, they can walk away completely intact.

We need a new act of parliament: "the Bureaucratic Stupidity Act" where bureaucratic stupidity is punished by being banned from ever working in Government again, or ever working as a consultant or advisor and also a ban from ever directing or managing anything!