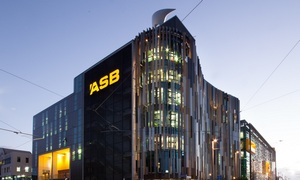 ASB has posted annual profit of more than $1 billion for the first time.

Its the seventh consecutive year ASB has posted record annual profit. The bank's cash net profit after tax, the measure it prefers to highlight, rose 13% to $1.033 billion.

“Over the past year, we have remained focused on delivering sustainable, diversified balance sheet growth across our key customer portfolios. All our business units performed well and we continue to experience sustained momentum, despite some external headwinds and a rapidly evolving financial services market,” ASB CEO Barbara Chapman said.

"Home loans increased by 7% against the prior year while business, commercial and rural lending grew by 11%. This contributed to an increase in total customer lending of 8% on the previous financial year. At the same time, customer deposits grew by 6% in a highly competitive market for bank deposits."

Sovereign up for sale

"We are in discussions with third parties in relation to their potential interest in our life insurance businesses in Australia and New Zealand. The outcome of those discussions is uncertain. While the discussions may lead to the divestment of those businesses, we will also consider a full range of alternatives, including retaining the businesses, reinsurance arrangements or other strategic options."

Sovereign's June year cash net profit after tax was down $3 million to $102 million.

The figures below are for ASB

And here's its parent CBA's announcement.

Does that include the possible proceeds of crime, given the economy grew a fraction of that rate of profit increase?

Real estate agents perhaps being complicit in the illegal shifting of money out of China, too?

Tough. Must be lending restrictions kicking in ....

Provides a good leverage point when next negotiating that mortgage or term deposit rate with ASB. (Pirates!)

$380m tax paid according to their statement.

Crocodile tears a few months ago when Banks were winging about finding it hard to source overseas funding and so had to increase BASE RATES now we see the true reason in record profits. What a JOKE

In the wake of two – one domestic and one offshore – senior-unsecured deals issued during the month of July, Bank of New Zealand (BNZ) says lower volume of domestic issuance in recent years is offset by a greater call on foreign-currency markets in line with issuer strategy. There has been no impact on demand from a one-notch Moody’s Investors Service (Moody’s) downgrade in May 2017, the issuer insists. Read more

It looks like ASB is struggling to get by. How can they survive with only $1b in profit?

Just goes to show, pumping out mortgages is the best gig in town. You have the legislation, implicit guarantees, the loyalty of the sheeple, and global monetary experiments all contributing to grease that billion.

No doubt the other three will also have a handsome profit, and we are still obligated under the O.B.R to contribute financially, should there be a bank failure, while they transfer these huge profits overseas. The parent companies in Australia must be laughing at us, we can only blame JK for allowing this pathetic legislation to have taken place

Really? Who is "we"? From my understanding, in the event of bank failure, "we" is bank deposit holders followed by shareholders. The taxpayer is not responsible for anything, except the implications in the aftermath.

Wrong way around - it's Shareholders first. Then unsecured creditors, including deposit holders.

This is so cool (pun not intended).

There is a reason why no likes banks. The day will come when we will by-pass them.

Yes really JC, I did not claim that the taxpayers were responsible in the event of a failure, may I suggest you read the OBR in depth, also cast your mind back to the BNZ saga not one but two..

So "we" is a subset (bank shareholders and creditors) of taxpayers. In the case of BNZ, the bank was ultimately backstopped by the taxpayer. OBR policy does not necessarily mean the taxpayer will not be on the hook. That is what some people perceive as the "implicit guarantee."

I thought the bank's profits were under pressure, that they had to get funds from offshore that are expensive, that's why they raised our interest rates. So it's all not true? they just wanted more money for themselves?

Wow… this is huge profit. Even after deducting the taxes, the company seems to be in a very strong condition. I believe that the shareholders would have hit a jackpot by now. Buying the shares of this company is something that is impossible for the time being.
amsterdam bike tour