New contributor Alex Ross assesses the currency pressures on the NZD and looks how the majors will move over the coming week, from the USD, CNY, INR, and other Asian influences

Currencies
New contributor Alex Ross assesses the currency pressures on the NZD and looks how the majors will move over the coming week, from the USD, CNY, INR, and other Asian influences 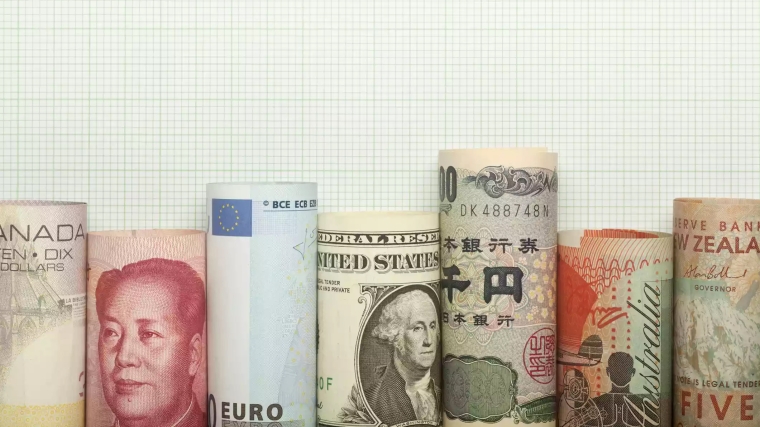 We are just 36 days out from the US Presidential election, and currency volatility is rising as markets brace for a month of polling uncertainty. A quick look at the last seven US presidential elections shows us that a weaker USD (generally accompanied by a stronger stock market) is good for the incumbent. Whereas the prospect of a change in leadership tends to weigh on investor sentiment and support safe haven flows back into the Greenback. 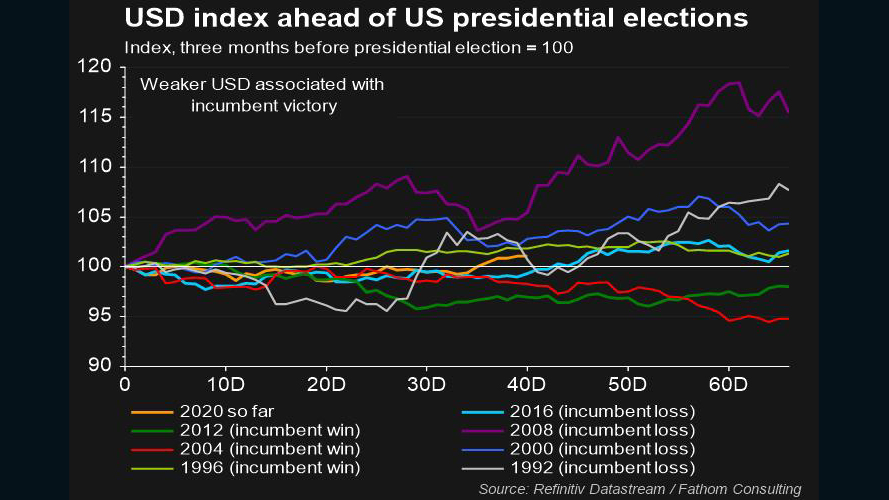 This week FX markets are set to be dominated by the first presidential TV debate taking place in Cleveland on Tuesday night (US time).  Biden will go into the debate with an average 7% lead according to opinion polls, but analysts are thinking President Trump may have the edge in the debating arena.

That may see the USD weaken a little if polls tighten in favour of the incumbent, boosting equity markets. But we think the bar is set pretty low for a surprise outperformance by “Sleepy Joe”. Coupled with a rising resurgence in COVID cases through Europe, a Federal Reserve that looks happy to sit on its laurels, and an ongoing disagreement for another fiscal package in the States, it’s easy to make a case for another rocky ride for risk instruments and NZD/USD again this week.

The data calendar is pretty quiet this week but one notable release will be both the Chinese manufacturing and services PMIs on Wednesday. Both rebounded strongly in August, and with hopes for a Chinese led global recovery still flickering this pair of leading indicators could heavily effect risk sentiment mid-week. We’ve noted a trend recently of strong industrial production data out of China coupled with weak retail sales, a sign that while infrastructure projects are running strong, the Chinese consumer might not be.

In other Chinese news the FTSE Russell will add Chinese government bonds to its benchmark World Government Bond Index from next year. Deutsche Bank analysts suggest this is likely to attract passive inflows of US$120B from foreign investors. Unsurprisingly the news gave the Offshore Chinese Yuan a boost on Friday. NZD/CNH is back near 4 month lows this morning, although a stronger Yuan will be good news for our dairy exporters, given there is often a strong correlation between auction prices and better Yuan purchasing power. The next Global Dairy Trade auction is on 6th October.

Recent strength in the Chinese Yuan hasn’t been shared by all Asian currencies. The rapid spread of COVID-19 through India has kept the Indian Rupee on the backfoot. The Reserve Bank of India meets this week, which may create further downside risk for the INR, but after 115 basis points of cuts from March through May, and with inflation still running well above their 6% policy limit, it is unlikely the RBI will take much action. NZD/INR is down 4% from the 5 year high seen in late July, but against the current COVID backdrop looks likely to remain elevated for the foreseeable future.

It’s a similar story in Thailand where vanishing tourism is seeing its external surplus shrink. That is keeping NZD/THB near 15-month highs, while Indonesia’s decision to directly finance government debt recently saw NZD/IDR touch the key 10000 level for the first time since late 2018. In fact, outside the Yuan, there are very few Asian currencies that look immediately attractive. For NZ importers, that suggests requesting an invoice in local Asian currency might be optimal to paying US Dollars, particularly if the latter remains underpinned by that presidential election uncertainty.

US jobs to round out the week

The final piece of major data to be released this week comes in the form of US jobs data. Early expectations are for a gain of 900K jobs and the unemployment rate to slip further to 8.2%. We’ve highlighted the large gap between official US unemployment figures and those claiming unemployment benefits before, although after our second quarter unemployment print came out at a scarcely believable 4% we can hardly point fingers too vigorously here.

Lastly, a note on the NZD/AUD cross, which touched its highest level since the end of July late on Friday.

Westpac and NAB have already put out a call for the RBA to drop its cash rate to record low of 0.10% next Tuesday, following a rather dovish speech from Deputy Governor Guy Debelle last week. However, former Australian PM Paul Keating didn’t mince his words late last week when he remarked “as history has shown, when a real crisis is upon us, the RBA is invariably late to the party. And so it is again”.

We think Paul carries a little baggage from the recession Australia had to have in the 1990s. Nevertheless, the growing call for the RBA to do more heavy lifting across the ditch can continue to feed into upward pressure on NZD/AUD ahead of the October 6 meeting.