Westpac's senior market strategist Imre Speizer takes a look at past elections to see how the Kiwi dollar reacted to election uncertainty, and what we can expect leading up to our imminent poll

Currencies
Westpac's senior market strategist Imre Speizer takes a look at past elections to see how the Kiwi dollar reacted to election uncertainty, and what we can expect leading up to our imminent poll 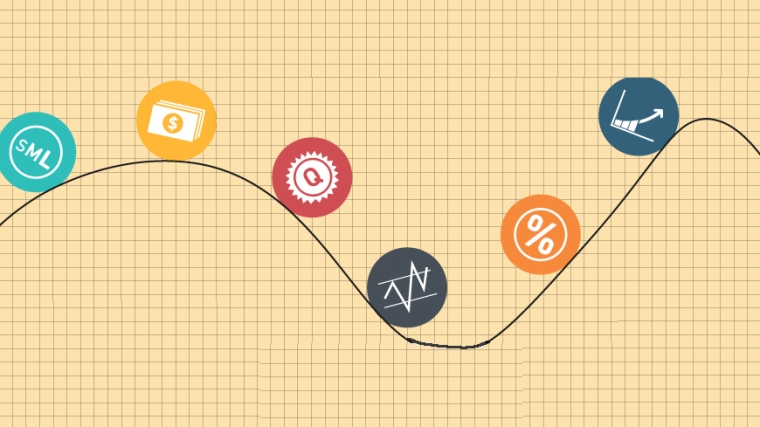 Historical data shows that markets do not react much to New Zealand elections. To the extent that there is a reaction, it’s more likely to occur around the announcement of the governing coalition, rather than the election date itself.

With the NZ general election only a couple of weeks away, on 17 October, we turn our thoughts to how the event may affect NZD markets. We examine market behaviour around previous elections, searching for any patterns which may repeat.

We first look at market reactions in NZD/USD, NZD/AUD and NZ 2yr swaps over the 24 hours following the election, taking the past 11 elections as our sample (limited by the history of reliable NZ financial market data), There appears to be no systematic market response, either to the initial result, or to the flavour of winning party (Chart 1). Of course, this analysis is too simplistic, because it doesn’t control for other influences on markets on the day. In addition, the sample size is too small to make any statistical inferences. 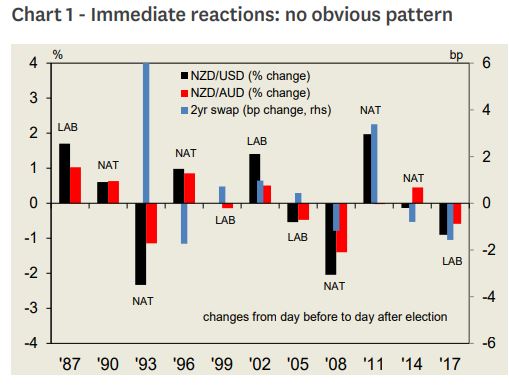 While we can’t enlarge our sample size, we can look at the market response over a longer period to capture any evolutionary patterns (Chart 2). For NZD/USD, we can see it declines, on average, until around 10 days after the election, and then it recovers. This isn’t as apparent for NZD/AUD - arguable a better pair for analysis because it controls for international influences common to both the AUD and NZD. 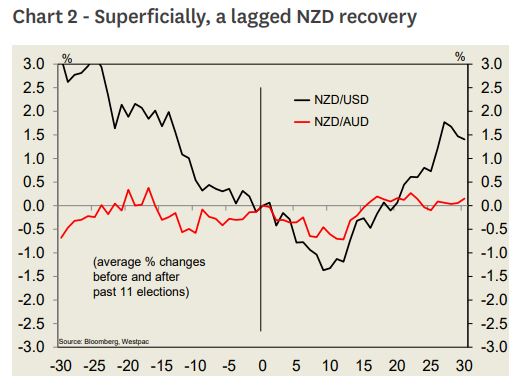 We can improve our analysis and control for other influences by using our fair value models for NZD/USD and NZD/AUD. We examine the behaviour of the model residual (the left-over bit from NZD fair value which isn’t explained by global risk sentiment, yield spreads, commodities etc). The results in Chart 3 confirm what we saw above for NZD/ USD - that it gradually weakens ahead of an election, and doesn’t recover until a couple of weeks after the election. A similar result is seen for NZD/AUD.

That pre-election decline can easily be explained by political uncertainty, with similar effects witnessed in most other countries and markets. The lagged nature of the NZD recovery could be explained by the typical multi-week lag in announcing the governing coalition (NZ adopted a MMP system in 1996). 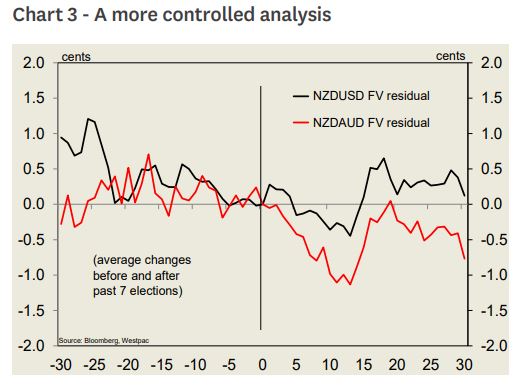 On average, 2yr swap rates declined ahead of an election and continued declining afterwards. Controlling for OCR movements by looking instead at the 2yr swap - 3mth bank bill spread, we see only a sideways trend. While acknowledging the limitations of using a small sample, it could be the case that NZ interest rate markets are less sensitive to perceived changes in political uncertainty than are the currency markets. 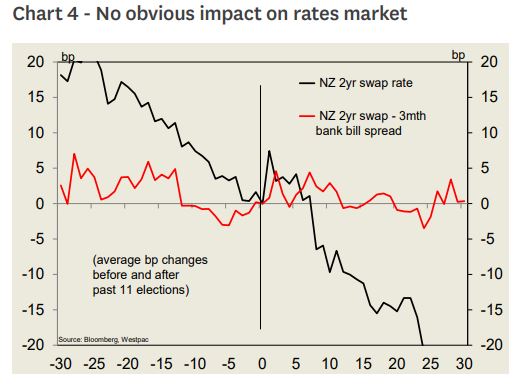 Imre Speizer is a senior market strategist at Westpac, Auckland. This Note was first published here, and is re-posted with permission.