PM Key says NZ$ overvalued, "but we're considering what we can do to resist a rising exchange rate"; Welcomes yuan move

PM Key says NZ$ overvalued, "but we're considering what we can do to resist a rising exchange rate"; Welcomes yuan move 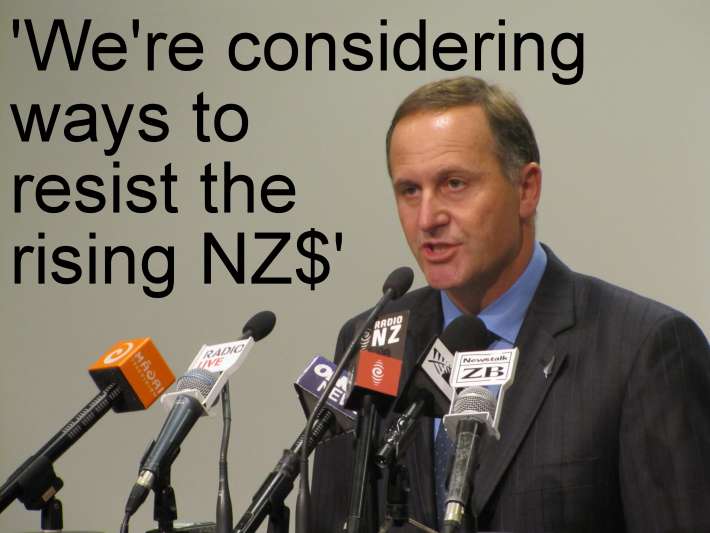 The government is considering what can be done to resist a rising New Zealand dollar, which is currently overvalued due to weakness in the American and European economies, Prime Minister John Key says.

"We still want the markets to normalise. We've been overvalued for a few days, but we're considering what we can do to resist a rising exchange rate," Dow Jones reported Key saying.

BNZ's currency team said the Prime Minister's comments looked to be nothing more than jaw-boning. They said the PM's comments knocked some steam out of the New Zealand dollar overnight.

"The high level of the currency is simply a reflection of the fact NZ economic growth is expected to outpace that of the UK, EU, US and Japan this year. This is something Key himself noted overnight," the BNZ currency team said.

Meanwhile, Key welcomed the move yesterday by the Peoples' Bank of China to widen the yuan's trading band from 0.5% to 1% either side of a referenced exchange rate. The move would allow for more trading of the Chinese currency, and indicates increased willingness from Chinese authorities to allow the yuan to appreciate.

"We actually think it's in China's best interest for two reasons. One is that it will take off the pressure on Chinese inflation. And secondly, if it results ultimately in growth in U.S. exports, that will help bring back confidence among the middle class in the U.S," Key was reported as saying.

"Basically if you want to give the global economy [a boost], you need to get U.S. consumers buying again, and that will happen only if they feel they have greater job security," he said.

New Zealand was caught between the US taking actions to keep their currency low, which made New Zealand exports to the US less profitable, and the Chinese government also not allowing their currency to rise, which meant New Zealand could not be as competitive in China as it could be, English said.

"So if either of them change their policies to give more flexibility and allow their currencies to move in the way that we expect they will move, that will benefit New Zealand," he said.

Yikes is that it - when's the next installment?

Comforting our fast disappearing, self styled middle class must be high on the priority list.

No wonder unions rather than guilds are looking more popular.

Before you know it the tribes will be chanting Helen Kelly for Prime Minister.

More like whinney peters...he seems to promise anything, anytime...
Everyday looks tougher for JK to stay another term....sadly the alternative looks no better.
regards....

I reckon a new face will be found to represent this growing fraction of  society.

They could care less about the relative pair value of the NZD - they just want some and the right person to get them.

Empty talk as usual.
He has ruled out the Tobin tax.  If they were serious, why not do as our much lauded trading partner China does.  The Government controls the exchange rate by routing all international currency transactions through the government bank.  Currencies are exchanged at it's chosen rates.  Who can complain as it is just what China does and everybody accepts it?  The currency stability and somewhat artificially low Yuan has worked wonders for China at the expense of the rest of the world, so why not us too.  Of course it would put all Key's slithery non contributing currency trading mates out of business in a single move, so almost certainly he would far rather protect their doubtful interests over those of hard working New Zealanders.

Over valued you say?  Well in that case, the recent sell off of covered bonds into the European market will certainly prove to be an interesting dilemma to keep an eye on when the NZ$ slithers its way back down.  Are the big Aus banks hedging against this risk? (or are they simply holding CDS's on their own bonds?)

"The high level of the currency is simply a reflection of the fact NZ economic growth is expected to outpace that of the UK, EU, US and Japan this year. This is something Key himself noted overnight," the BNZ currency team said.
Absolute nonsense.  Its understandable the BNZ (or National Australia Bank in disguise) would say this if keeping the NZ$ high protects their hedging positions. Key wants to pretend at having sound financial management.
US growth will almost certainly outpace NZ.
The reason our dollar keeps rising is that we are funding our massive debts- both fiscal and current- by borrowing or selling off shore (so foreigners are buying NZ$) while Japan, the UK, and the US are funding their deficits (Japan actually has a current surplus) onshore, largely by money printing.
We've been overvalued for forty years, not a few days. Its very easy to bring our exchange rate down- just look at what the UK and US are doing. Hopefully Key and English will in fact consider those actions; but I'm sure I'm not alone in not holding my breath.

I agree, BNZ is worng, I think the  biggest thing is we are not printing like mad in a race to the bottom.......I cant see why our growth is going to be meaningful especially when you consider energy is now expensive....and when everywhere els eis sad where to we sell to?
I dont agree on the printing/QEing though....we can drop the OCR, add in a tobin tax and limit LVR's, bring in a CGT....lots of half way sane things.....
regards

That is a strange and short sighted comment that is typical of many short sighted views.
Put it this way...if a company buys more than it sells, it goes bust. It works the same with NZ Inc - if we import more than we export (in $NZ) then we are screwed and can't afford to buy anything.
Or, The more money a company can make exporting, the more it can pay employees, who can afford more. Don't repeat the usual 'put your price up' or 'make a niche product' - we compete with companies from around the world and are disadvantaged by our own exchange rate.

New Zealaand is a country not an Inc.  There is a difference.

"Basically if you want to give the global economy [a boost], you need to get U.S. consumers buying again, and that will happen only if they feel they have greater job security," he said.
Oh well... there goes that global recovery dream.... or was Key referring to Americans moving to China to work in their factories?
Basically the problem is 'everyone's currency is overvalued'.... mmmm

uh...but for 10 years at least they have been doing so on debt...now they have 15% real un-employment, a Republican party hell bent on putting them in the gutter and the rest, in-different.  Just where is the US economy going to get a pick me up? CCs in the USA seemed to be at 7% interest in the past, now it seems 30% is not un-common....and thats just one way the consumer is being shafted....Mortgages 3% now what?  Healthcare rising at 7% and ppl now forced to buy it.....uh hello..........
If that is all he can see as a way forward we are in as deep doo doo as I think.......everyone's currency is over-valued is an oxy moron......

The world sells to the US. Thats how they grow their economies. The US buys their stuff with debt. All is just dandy as long as the US can keep borrowing. The Usd is sliding to far for others comfort or to make it easy for them to export. Thats why they complain about Fed QE (but do it themselves and have been doing such for years). Thats why qe will not work (bernake co-authored a thesis stating such himself). It does kick the can though, which is about all the Fed can do now. The game is up. The world consumer is broke....

Never mind the $........ New Zealand is over-valued in so many areas.
Will bringing down the kiwi help bring these valuations to order,  or let 'em rip?