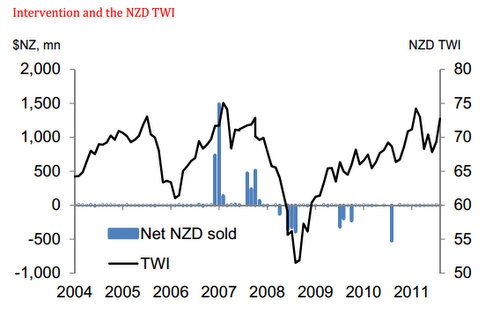 But that story may change in the just-completed financial year to June 30 because of a last minute surge in the New Zealand dollar. It turns out Friday June 29, 2012 may have been one of the more annoying days for the Reserve Bank's accountants.

News out of Europe that EU leaders had agreed to use the eurozone's planned bailout fund to directly support struggling banks saw the New Zealand dollar jump one-and-a-half US cents the day before the Reserve Bank was set to lock in its mark-to-market gains or losses on its foreign exchange position for the year to June 30.

In recent years, buying back New Zealand dollars during 2008/09 at lower rates than it sold them for during 2007/08 saw the Reserve Bank realise NZ$825 million of profits from its currency market activities.

But a rising currency through the years to June 30, 2010 and June 30, 2011 erased half those gains, at least on paper, as the Bank booked losses of NZ$414 million on its foreign currency position, it says in a paper released in June focussing on the currency intervention policies of other central banks.

The Reserve Bank's next annual report, for the year to June 30, 2012, and set to be released in late September, will show the latest changes in its foreign currency position though a year in which the Bank did not make any major net purchases or sales of New Zealand dollars.

And a jump in the New Zealand dollar on June 29 this year, on the back of that good news out of the eurozone, would have made market watching inside the Bank rather exciting.

For general accounting purposes, the Bank measures its annual gains or losses on its currency position going on exchange rates on June 30.

New Zealand's Trade Weighted Index - a measure of the New Zealand dollar against a basket of trading partner currencies - rose from 71.5 on June 29 to 72.2 on June 30. It had started the financial year at 71.2.

It may look like small chips, but the jump in the New Zealand dollar on June 29 may have made all the difference between a stable year (or profits depending on what holdings of various currencies the Bank had), and a mark-to-market loss on its currency position for the year.

Now these mark-to-market losses don't mean the Bank has paid out hundreds of millions of dollars to counter-parties. They merely represent what's happened to the value of its foreign currency holdings over the financial year. But it's always nice to keep track of how things are going.

The Reserve Bank gained its current currency intervention policy in 2004, when it was allowed by Finance Minister Michael Cullen to intervene in currency markets in non-crisis periods to try and take the top or bottom off an exchange rate cycle.

Intervention must be conducted in line with the Bank's Policy Targets Agreement with the Minister of Finance, namely, price stability.

The final point, that conditions in markets must be opportune and allow intervention a reasonable chance of success, is viewed the leading reason for why the Reserve Bank has not intervened in currency markets for the past year, even while continuously saying the currency was overvalued.

Uncertainty about the actions of other central banks - particularly the US Federal Reserve - which moved to devalue their nations' currencies through the creation of new money via quantitative easing, has had the Reserve Bank sitting on the sidelines of global currency wars. It is still anyone's guess as to whether the Fed will embark on a third round of QE, which would likely further devalue the US dollar, pushing our currency even higher.

But some, led by the Labour Party, are calling for the Reserve Bank to be more active in terms of currency trading to try and keep speculators on their toes and perhaps make them think twice before speculatively trading the New Zealand dollar.

The Reserve Bank may even be in a good position to make a buck or two from its vantage point in the NZ dollar market, Westpac economist Michael Gordon told Radio NZ last month.

On 11 June 2007, the Bank announced its only openly publicised intervention, when it issued a press release saying it had intervened as it regarded the value of the currency as “exceptional and unjustified in terms of the economic fundamentals”. The NZ dollar was trading at around 0.76 against the US dollar (a post-float high at the time), and fell by around 1 cent after the announcement, Cassino and Lewis said.

At other times, the Bank had intervened less openly by buying or selling NZ dollars to adjust the size of its open foreign exchange position around its benchmark level.

That benchmark is set at 1 billion Special Drawing Rights - a basket of the US dollar, the British pound, the Japanese yen, and the euro. On today's exchange rates 1 billion SDR would be equivalent to NZ$1.8 billion. The latest figures on the Bank's open foreign exchange position showed it was NZ$2.24 billion at the end of May 2012, well above the benchmark.

"The Bank aims to increase its open position (sell NZ dollars / buy additional foreign reserves) when it judges the dollar is near a peak in the exchange rate cycle and return to its benchmark position when the exchange rate is near its historical averages," Cassino and Lewis said.

"Conversely, the bank also aims decrease its open positions when it judges the dollar is [in] a trough in the exchange rate cycle and return to its benchmark position when the exchange rate is near its historical averages," they said.

"These adjustments to the Bank’s foreign exchange position have not been accompanied by open announcements of intervention, although market traders closely monitor monthly statistics on the RBNZ’s net currency purchases for signals to the Bank’s activity in the market, which are published with a one month lag.

"For example, during June-August 2007, a net NZ$2.4bn in reserves was purchased, with another NZ$1.6bn added in early 2008. Some of this position was reduced as the exchange rate fell during the GFC, resulting in realised profits for the Bank. In 2008 and 2009 the RBNZ made NZ$344mn and NZ$481mn respectively from foreign exchange changes," Cassino and Lewis said

Reserve Bank figures on its currency market activities in the month of June 2012 will be released here on August 10.

It might be a scream .. but the minute Bollard announced his retirement he became a lame-duck governor. With a few months left till his departure it is unreasonable for him to undertake any substantive moves that his replacement will have to wear the responsibility for, and equally when Wheeler takes over he will unlikely undertake any revolutionary moves until he has been in the job for 3 months at least. So you have a lame-duck situation for the next 5 months

There is nothing in the article to justify having not done more; given Bollard's fairly belated position that the $NZ is grossly overvalued. He's had the tools for ages and has barely used them, even though he frequently states the NZ$ is overvalued, and even though frankly inflation has not been any kind of real threat for years.

It's a copout to suggest that other countries printing makes it harder; almost certainly their printing makes the case for our action to be even more compelling. It's also pretty weak kneed to wait for Australia, although most certainly if they do move, it would be suicidal for us not to follow.