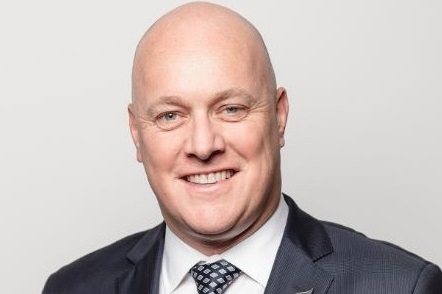 Simon Bridges is continuing to fail to win the public’s confidence, despite National being the country’s most popular political party, according to the latest One News Colmar Brunton poll.

While National MP Judith Collins remained neck-and-neck with Bridges in the preferred prime minister ranks, outgoing Air New Zealand chief executive Christopher Luxon made an appearance in the poll, conducted between July 20 and 24.

One percent of those surveyed named Luxon their preferred prime minister.

This was despite the open-ended survey question not providing names. Luxon will also remain with Air New Zealand until September 25, and while strongly hinting at it, has not officially announced he will run for National.

Support for Bridges was up 1% from the last poll conducted in early June, to 6%. Meanwhile support for Collins remained at 6%.

Both parties scored an additional percentage point at the expense of New Zealand First, which was down 2% to 3%.

Support for the Green Party was stable at 6%.

Labour and the Greens would have enough seats to govern without New Zealand First.

Support from ACT wouldn’t be enough to get National across the line.

The poll saw 1003 eligible voters surveyed via landline and mobile phone. The maximum sampling error is about ±3.1%-points at the 95% confidence level.

Here is a summary of the results:

This government is within a hair's breadth of being knocked out. Disastrous for Labour, and taken before the evolving Ihumatao story was a consideration.

Simon Bridges must be happy, he's performed better than he's generally given credit for.

What's your definition of hairs breadth or is that an exaggeration..

Come on mate, kick that brain into gear. A one point drop for the greens means a National majority.

maybe you're not too good with maths!!!

think before you pass comments, unless you're Mr. bridges

If both the Greens and Winston First are below 5% (which looks a real possibility), it becomes essentially a two way fight between Lab and Nat.

The votes for all other parties would be wasted, and this means that the next Government could be elected with around 45%.

but if the greens/nz first were to go lower, that would push the main parties higher or one of them higher...

If the Greens and NZF had 4% each and all other minor parties had a total of 2%, the election would be decided on the basis of the 90% "non-wasted" votes.

The polls seem to vary considerably. One seems often to favour National and the others Labour.

You may be overly optimistic.

You do realise it's an opinion poll not an election?

Interesting that more people want Labour to govern than Jacinda to be PM. Given she is the only reason they are in government, it is a bit surprising. It isn’t if they put any thought into developing any policy while they were in opposition. KiwiBuild is a great example of that.

Interesting on Q&A on TV 1.
When Sue Bradford is totally pissed off with the coalition government, you know this government is not performing.
Mathew Hooten also stated that the government was hopeless and Ardern incompetent, which anyone with any sense can see.
“The Man did state that it will be the most despised government of all time and it is happening.
How is Ardern going to handle this Land thing?
Probably terribly, she needs to be strong but as we know she is as weak as anything.

. . they spent the 9 years in opposition waging a continuous war within themselves.... every man and his dog wanted a chance to lead the party ... the politics of divisiveness and back stabbing were the stuff of legends ...

They never had the time nor the inclination to develop some policies...

...and why bother anyway ... we all knew that the Jolly Kid was gonna lead the Gnats to a fourth election win ..

It's a bit of a worry because we always need a strong opposition. And I think Labour are heading back to opposition shortly. Who is going to believe much of what they have to say in opposition after their ability to deliver whilst governing so far this term?

Luxton for PM? One would hope, pray actually, should that happen, that he would evidence a heck of a lot more duty of care to the citizens of NZ than he did to the passengers of AirNZ.

Amen to that.
My last flight with Air NZ back to Australia, I was 1.2kg over the limit. They gave me the choice of paying $128 extra or keep it down to the limit. They do know to treat their customers even though I paid for the premium fares!

Well, I never...a nominally right-leaning commentator in Matthew Hooten saying something unfavourable about a nominally more left-leaning government? I am shocked! Shocked, I tell you!

People are beginning to realise that Ardern is not only incompetent, but also lazy and constantly ducking for cover.

Is it? There are obviously more options for preferred PM than party.

We'd all do better if the Govt sat back and did little and didn't roll out policies. They're always in the end to the benefit of the few. National coming back, and getting stuck into lots of changes.. oh yeah, I'm sure it would work out great.

I must say, if we have to have a former Air NZ CEO as a politician I'd pick Rob Fyfe before Christopher Luxon.

Not sure about that one either Rick. I recall a piece about how when Norris arrived at AirNZ he surveyed the entire upper management. Out of that he observed that every response he received was about flying aeroplanes, not one about flying passengers. And to be fair he did improve things resultantly. However I would suggest that his successors have reverted to the old school and not taken long to do so.

Norris was the one who brought Fyfe in to help lead the change, though.

Having just endured Air NZ for a couple of long flights I wouldn't put much credence in his capability to run a country.. the product quality has dropped massively in the last couple of years. I was a fan of Air NZ but will take my substantial annual travel spend elsewhere from now on... appalling service that reeks of cost cutting and stripping the value from the product.

Immediate return to shareholder is great but not if you're going to lose a long term customer in the process...

I had travelled to asia once via Sing airelines, part of the leg was with AIR NZ.. oh gosh, swore that i would never travel with anyone that had a codeshare with AIR nz

mvgsmf. Totally agree. Apart from domestic, where Jet Star is even worse, I would go to great lengths to avoid any AirNZ flight. It would seem to me that, not all but far too many, of the staff at all levels and functions, consider it would be a great job, if it wasn’t for the passengers.

Yeah I couldn't believe the difference from 2 years ago.

Both similar length trips to SE Asia in premium cabin...first trip was great - this time not an FA to be seen after meal services, "kitchen closed" on the seat order system, no water refresh in 9 hours unless you paged an FA. I've had better service in Emirates Economy class for a whole lot less $$$ and Emirates / Cathay's / Qatar / Singapore airlines Business class smokes Air NZ's offering for less $$$...

Do you remember the outburst of one Philip Burdon, Cabinet Minister, slamming the AirNZ service on a SIN to CHC flight in the nineties. So it’s not new by any means. I had actually started avoiding them before that. And still do.

Wow imagine if Luxon was PM it would be curtains for Labour. The only question I have is WHEN. The next election is to close ? will he just join the National party and then wait for Bridges to fall on his sword ? support for both Bridges and Collins is so low you can write them both off. All national need is a decent leader, they already have the party vote, which will only increase with the right leader and Luxon is clearly it.

Coalition's expanded army of spindoctors tried and failed to influence Colmar brunton poll - they spent last week when they knew CB was polling pushing dubious internal UMR polling results that had National in 30's, and running anti Bridges attack ads (Greens) and other anti-National hit pieces in an attempt to sway the results. Yet even so CB poll sees them languishing behind National. They've done this frequently in past - notably pre-election and during Little's tenure.

Greens are the winners on this poll. Steady is good for them. And in the box seat for advancing policy accommodation from both major parties. National increasingly MUST look as though they are 'doing something about the environment'.

I wonder how many comments there would be here, if the Party schills were deleted?

The joke is that 'business skills' are not what is needed. Neither is economic training. We are beginning the peak/fall process that was inevitable, pushing physical growth on a finite planet. The fact has not gone away, the collapse is getting ever nearer.

As t who is a better leader for the coming phase, I'd have to go back to Jeanette Fitzsimmons. Nobody since has shown her understanding of the problem. Davidson is a wasted space, in comparison. And Parker still thinks you can have growth within environmental limits, so he's out. Would Luxton have the strategic skills? Maybe - but we'll never find out because we don't have a journalist who 'gets' the Limits to Growth. Or at least, one allowed to be published....

Hey Powerdown, nobody wants to hear about a finite planet, thats just all bad news and will scare the punters. There isn't a politician in the world thats going to attempt to bring in the measures required to keep this planet going as we know it. Massive population control is required. The only reason we are seeing the current climate change problems is population. Halve the population and problem solved, double the current population and we are doomed. The policies required cannot be implemented because they are to unpopular. My advice, Just enjoy the planet while it lasts, suggesting anything else to solve the problem is just banging your head against a brick wall.

Yup, nice one kiwis, good to see you learned from the last decade of voting for a white male corporate CEO who stands for profit before people...how many more ways to make people impoverished do you think Luxton could introduce? My bet would be a terrifying amount!