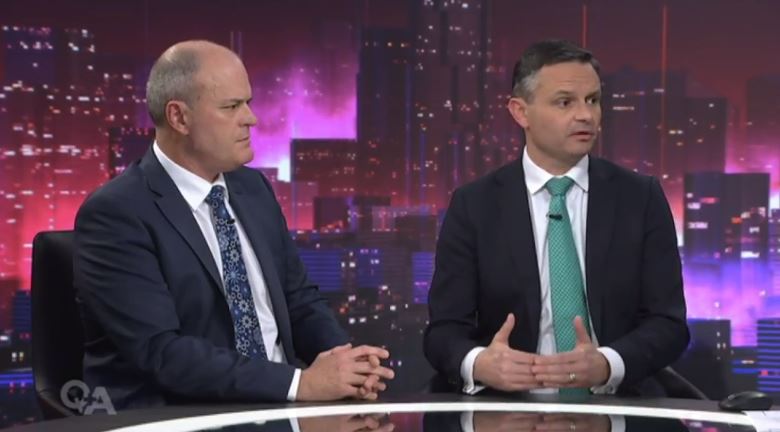 Todd Muller and James Shaw appearing together on Q + A in Sep 2018 https://www.tvnz.co.nz/one-news/new-zealand/q-climate-change-minister-james-shaw-and-national-s-todd-muller-find-common-ground-over-action

The National Party MP, credited for working with Climate Change Minister James Shaw on ensuring the Zero Carbon Bill has cross-party support, has had his climate change portfolio traded for a primary industries one.

Todd Muller will no longer be the person to bring National’s interests to the table, as Shaw continues to refine legislation to lay out a route for New Zealand to reduce its emissions and set up an independent Climate Commission to police this transition.

Instead Muller will become the party’s agriculture, biosecurity and food safety spokesperson - a position he’s always wanted being a “primary sector guy” - a former Zespri, Apata and Fonterra executive.

The reshuffle, prompted by Nathan Guy announcing he’ll retire at next year’s election, will see Muller jump from 31 to 17 on the party list.

While he will hang on to his forestry portfolio, his climate change role will go to National’s environment spokesperson and Bluegreens team leader, Scott Simpson.

National leader Simon Bridges credited Simpson for being passionate about the environment and taking a “pragmatic approach” to climate issues. But Muller’s pragmatism is what’s given him kudos from many across the political spectrum.

Shaw said Muller was a “constructive, thoughtful and responsible climate change spokesperson for the National Party”.

“I thank him for his willingness to engage in bipartisan discussions as I developed the Zero Carbon Bill.”

Shaw hoped Simpson was “open to similar cross-party cooperation that can ensure New Zealand has climate legislation which will endure changes of government and provide the certainty New Zealanders need to invest and commit to a low emissions future for generations to come”.

Both Bridges and Muller strongly denied the reshuffle signalled a change of approach by National on climate issues.

Muller said the bipartisan approach was one led by Bridges.

“The prioritisation of climate as part of National’s environmental credentials don’t change,” he said.

“The only thing changing is the person giving effect to that… I think that’s hugely positive.”

Muller said he didn’t ask Bridges if he could hang on to his climate portfolio.

Both he and Bridges believed it would be challenging for the same person to hold climate and agriculture roles.

Muller made headlines just over a week ago when he told Newshub Nation he was “broadly supportive” of the Government’s electric vehicle feebate policy, despite his party later launching a major campaign against it.

He then backtracked on TVNZ’s Q + A, very strongly toeing the National Party line on the policy.

Muller's performance again led some political commentators to talk him up as future leader material.

Indeed, questions were raised when following Amy Adams announcing her retirement in June, a reshuffle didn't see Muller bumped up the party list.

However following Tuesday’s reshuffle, Bridges said Muller was a “hardworking and high performing” MP “deserving of a promotion”.

“I have no doubt that Todd will hold this Government to account on behalf of rural New Zealand.”

The Zero Carbon Bill is at the select committee stage and is yet to have its second and third readings.

Met him and to me Todd Muller seems pretty good value. Do n'tknow a thing about Scott Simpson. Blue Green seems a good indicator, although the jury is out on if the Nats can ever get their heads around the environmental issue.

Muller made headlines just over a week ago when he told Newshub Nation he was “broadly supportive” of the Government’s electric vehicle feebate policy, despite his party later launching a major campaign against it.

He then backtracked on TVNZ’s Q + A, very strongly toeing the National Party line on the policy.

I've occasionally been struck that for a party ostensibly of personal freedoms and responsibilities, one must be very careful not to hold and discuss one's own opinions too freely. There was a similar example where one MP was asked her personal opinion on a matter, refused to give it and said "I haven't checked to see what our stance is on that".

Zero Carbon Bill a massive cost to the country. A waste of time. Wanted to disconnect my house
natural gas supply entirely and use electricity only. Cost would be $805. If the govt are serious about reducing fossil fuel energy usage they would subsidise or pay completely for residential natural gas users to disconnect their supply. Likely to have some unintended consequences if too many try to do it within a very short period of time but hey who cares, we'll have reduced our dependence on fossil fuel and can rely on wind when it blows and the sun when it shines. Maybe require some rolling blackouts all in the name of zero carbon.

How to take this nonsensical one apart. a) The cost of doing nothing is that further down the road the planet which in case you had not noticed NZ is on will be massively impacted. b) I dont quite understand why ppl have gas as by the time you pay the monthly standing charge and given heat pumps are now so cheap and efficient that certainly for my household it would make no financial sense to have or keep gas. Just why would the Govn with limited funds bail you out when there are far most important areas to spend the $s on reducing CO2, makes little sense. b) Wind always blow somewhere in NZ so no biggee, plus batteries with wind are now cheaper than coal. The air con load in summer can match the solar production. On top of that we have massive hydro. So really the fantasy you have can be avoided by managing the system and that's not by Laissez-faire mantra.

NZ politicians are doing themselves a favour by passing on the costs to NZ people.

Cngrats as a CC denier you are fast becoming a dying breed. If you dont like the bill, well you can go live somewhere else, say OZ seems to be well founded on denial.

Not true, cost to NZers on increased food prices alone will be substantial,

You only need a 10% increase in the price of food to wipe out that "saving" by doing nothing, let alone all the other costs that will stck on top.

Not true the impact on our insurance costs of even ability to insure will be substantial,

Meanwhile oil assets are starting to look like a stranded asset when an oil wildcatter moves on,

Then reduction in NZ's food output will hit our bottom line on earned exports and costs to NZers food,