Winston Peters distances himself from the NZ First Foundation, saying he doesn't expect the Serious Fraud Office to want to speak to him about donations; Simon Bridges doesn't rule out working with NZ First beyond this election

Winston Peters distances himself from the NZ First Foundation, saying he doesn't expect the Serious Fraud Office to want to speak to him about donations; Simon Bridges doesn't rule out working with NZ First beyond this election 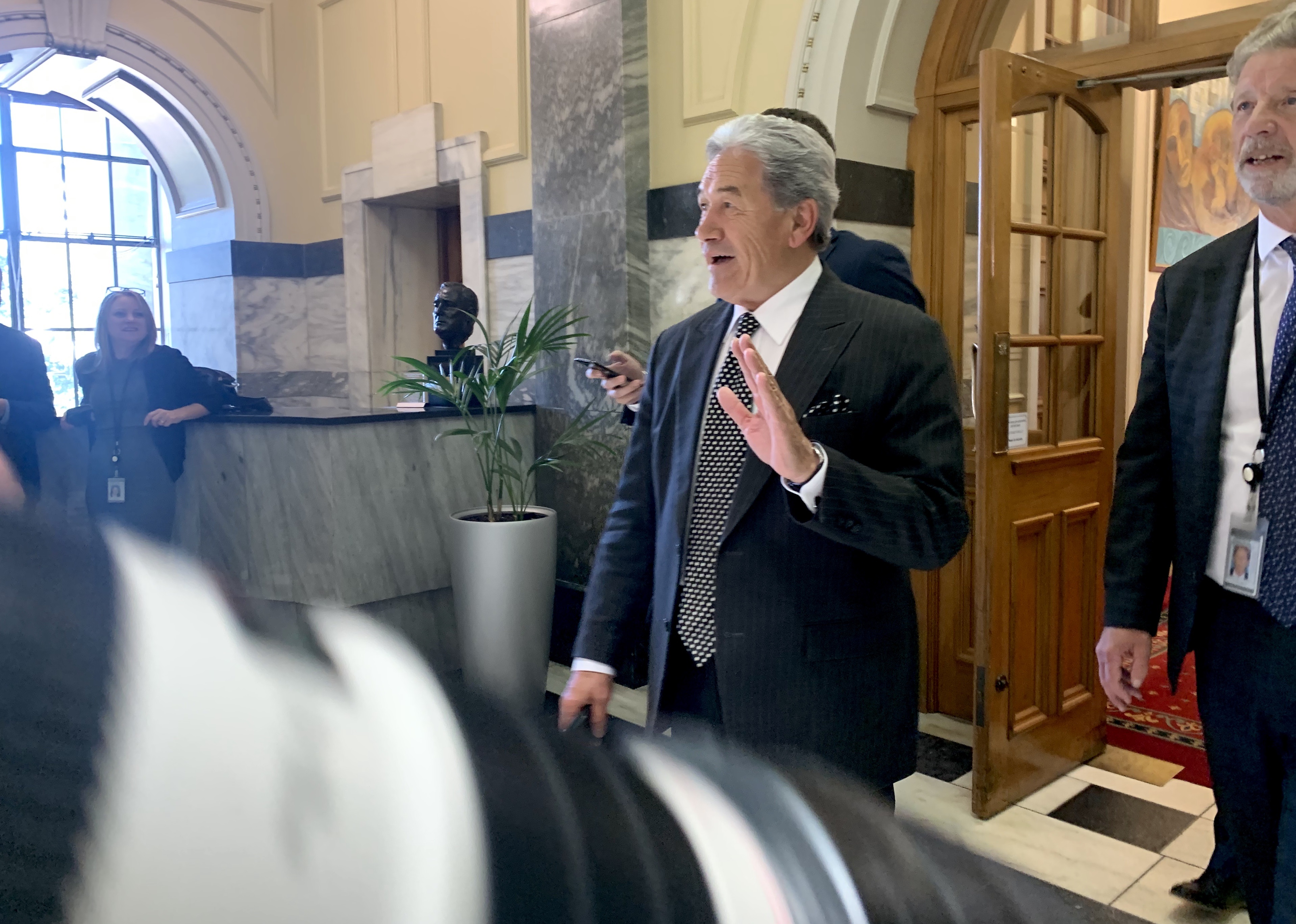 Winston Peters about to address the media on Tuesday

Peters on Tuesday said: “We’re going to wait and cooperate with the Serious Fraud Office and provide all the information. And until that report is in, I’ve got exactly nothing more to say, but one thing one: I’m not subject to any investigation here. And nor in a sense is New Zealand First…

“I don’t expect that anyone at the SFO is going to be talking to Winston Peters. Guess why? I was not involved in any way, shape or form.”

The Electoral Commission on Monday issued a statement saying it believed donations made to the New Zealand First Foundation should’ve been treated as party donations and weren’t disclosed as required under the Electoral Act.

It referred the matter to the Police, which said it planned to pass it on to the SFO.

Stuff, in a November report, claimed almost half a million dollars in donations had been “hidden” in what it described as a “slush fund” controlled by Peters’ lawyer and New Zealand’s First’s judicial officer, Brian Henry, and New Zealand First’s founding president and political lobbyist, Doug Woolerton.

Peters on Tuesday wouldn’t say whether he would or wouldn’t stand down from his ministerial portfolios if the SFO launched an investigation.

He batted away assertions he admitted wrongdoing when he on Monday announced the party’s donations arrangements would be reviewed.

Meanwhile National leader Simon Bridges, whose party is also caught up in a donations investigation by the SFO, used the situation to attack the credibility of the government.

Bridges picked up on the fact Prime Minister Jacinda Ardern on Monday wouldn’t provide a yes/no answer when asked whether she trusted Peters. Rather she said: “I have an excellent working relationship with him…”

“I think it’s an extraordinary situation where the prime minister won’t, can’t, doesn’t say that she trusts her deputy prime minister,” Bridges said.

However, about 30 minutes before he made this comment, Ardern backtracked and said she did in fact trust Peters.

“I couldn't operate this government without a trusting relationship with Winston Peters, and that is at the core of why we've been able to run that strong, stable government.”

Ardern stuck to her position that she wouldn’t pass judgement on New Zealand First until the SFO reported back its findings.

Bridges refrained from calling for Peters to be stood down, saying this was a matter for Ardern.

However, Bridges wouldn’t go so far as to ruling out working with New Zealand First if National formed a government in future (after this election).

He said it was important for the SFO to release its decision on the New Zealand First Foundation before the election.

The investigation came after former National Party MP Jami-Lee Ross accused Bridges of asking him to collect a $100,000 donation from businessman, Yikun Zhang, and then split it up into smaller amounts to hide it.

Bridges said neither him nor the National Party had been charged.

Why then doesn’t WP simply hold up a big sign that simply says “NO.” Folk would have to believe him then, wouldn’t they?

I found western politicians are there NOT to lead its people but to trick them.

:). That is true. The difference is that in China (and other dictatorships), the politicians will not trick you, they will kill you, torture you (and anyone you care for, or that they think that you may care for) until the people (including you, if not killed) submit and acknowledge that there is no other truth than whatever the Dictator says.

It is just like hear central govt. in China saying "we are transparent. it is the local govt. that is covering up how serious the outbreak is".

Tree rots from the root.

Well I'm definitely convinced then; Mr Peters is not a venal self serving narcissist who holds NZ to ransom every 3 years and cares for nothing for the baubles of office, and he was entirely unaware of any law breaking happening at the foundation, because he says so. Open and shut case for someone with his sterling reputation for truthiness and reluctance to obfuscate.

I found this video of Winston Peter's response.
https://www.youtube.com/watch?v=mPObzJkWueY

All the parties seem to be tainted with dodgy donations. May be the SFO should be the one which collects donations in future and allocate to parties as per the donors' wishes. Then reporting is sorted at the origin.

dont think WP got much in donations for removing the betting tax,not compared to what the liquor industry has donated to have the drinking age lowered. etc;plenty of lobbyists in wellington dishing out freebies all the time.he will be hoping to stay in the news and be recognisable to voters come election day.

I would not even trust him with the remote control for my TV .

And while I voted for him based purely on his hand-on-heart promise to hit the pause button on immigration until we got on top of our infrastructure backlog , he has not even attempted to do what he said he would do.

Why anyone one would vote for [ edit. ditto Ed ] in the future simply eludes me .

We like to think we vote rationally, but I doubt very few do. They'll see the smile, the attacks on the media and the promises to 'do something' and they'll vote for him again.

Taking money from the commercial fishing industry and then stopping the cameras being put on the boats...

Who knows what to believe.