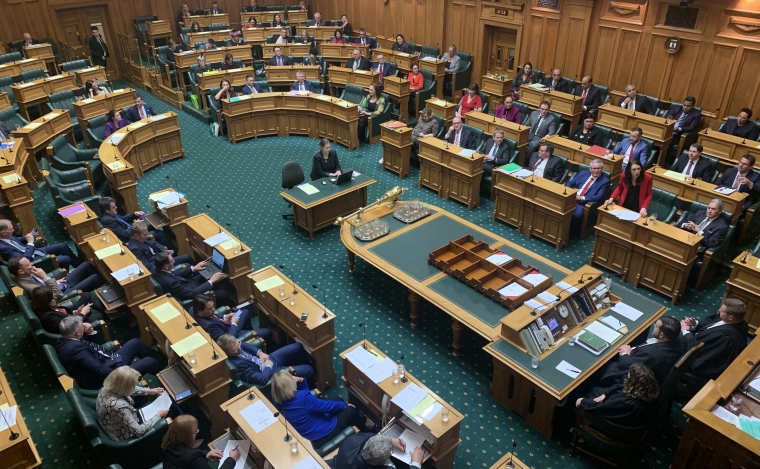 And… that’s a wrap. Parliament has held its final debate before rising ahead of the September 19 election.

While governing parties detailed their successes and opposition parties laid on the criticism, the speeches provided somewhat of a scene-setter for the upcoming campaign period.

The debate was largely serious; the Covid-19 crisis being a whopper in a chain of disasters suffered by New Zealand in recent years. What’s more, a number of long-standing issues around housing, climate change, infrastructure, and poverty have had to be addressed by this government.

But there was a “school’s out” energy, as MPs had a bit of fun lobbing pointed jibes across the House.

Here's a highlights reel of the more entertaining political bits (never fear, interest.co.nz will be back into providing election coverage through a policy lens tomorrow):

Jacinda ‘this election is not what we’d planned’ Ardern

Prime Minister Jacinda Ardern kicked things off, noting around 190 pieces of legislation had been passed under the Coalition Government. This graph, put together by Radio New Zealand a few weeks ago, shows how much has gone on in this term of government.

Ardern then addressed the elephant in the room - the Labour Party’s lack of policy this close to the election.

“This election is not what we’d planned,” Ardern said.

“It is fair to say, this campaign that we’re about to embark on - it’s not the campaign that we planned and prepared for six months ago. Nor will our manifesto be the same as it would’ve been, had we released it in January of this year.

“But I can tell you this, the values that we campaigned on in 2017; the aspirations that we had coming into this place remain unchanged; our plans to keep creating high wage jobs are as important now as they ever were. On supporting our job creators, on ridding this country of child poverty, on making a transition to a clean, green, carbon-neutral economy - Mr Speaker, we’ve started that journey and now we want to finish it. Let’s keep moving.”

Judith ‘farmers will always be on trend’ Collins

Then Collins had a go at Finance Minister Grant Robertson for not having a plan.

Collins repeated criticism of KiwiBuild, etc, said Labour would raise taxes and flew her flag for Resource Management Act reform, saying the new pieces of legislation she would replace it with would look “entirely different” to what “that lot” is proposing.

Collins then had a final dig at Peters: “He'll tell you he's a handbrake on them. No, he's not. He's the enabler. There's only one reason the Greens are in government, and that's because Mr Peters went their way.”

Winston ‘I'll be around long after you're gone’ Peters

Peters began his speech with a ripper in response: “That was eyebrow-raising stuff - and I don't use Botox! All that criticism, for almost 10 minutes, and not one new idea.

“Out there in the provinces, in the hamlets of this country, all those people who were expecting something at least now, at the start of this campaign, from the leader of the National Party just got carp, can't, and criticism, but no vision, no plan, no policy.

“Worse still, after nine years of doing nothing about the Resource Management Act, she says we're at fault.”

When a National MP interjected, saying “Goodbye” to Peters, he hit back: “I'll be around long after you're gone, sunshine, and I was here for decades before you arrived.”

Peters said he had “no regrets” about forming a government with Labour and the Greens, saying: “We were never forced to agree. If we did, we wouldn't be three separate parties…

“The Prime Minister announced that we've got over 190 bills passed. That suggests that we have got by on agreeing on most of the things, or, if we couldn't, that we got to a compromise and got there in the end.”

He continued ripping into both National and ACT, saying this government inherited “nine years of neo-liberal neglect”.

“The National Party may be making a comeback sometime, but it's not any time soon.”

Unlike Peters, Green Party Co-Leader James Shaw didn’t hold back voicing his frustration over the compromises necessary when in a coalition government.

“I know everybody here is champing at the bit to get out and campaign around the country; trying out their new election slogans,” he said.

“ACT are making a serious play for the assault rifle vote: "The ACT Party: more deadly than serious."

“National, of course, have settled on a new leader with a new slogan: "Why vote for the lesser evil?"…

“National want to grow the pie, Labour want to share the pie, ACT want you to get your own God damn pie, New Zealand First want a billion pies, and the Greens, of course, say that the growth of the pie is constrained by the size of the oven, and whilst you're making pie, perhaps you should keep your oven clean, otherwise your tamariki will get really sick.

“Look, I know that's not exactly bumper sticker material, but we reckon there's at least 5% in it.”

Shaw said, 15 minutes before he delivered his adjournment speech in 2017, he found out the Greens were polling at only 3.5%.

“Well, 10 weeks later we were in Government, and four weeks after that I met the Pope. So I'm just saying, a lot of things can happen in the final six weeks of an election campaign, and I am mostly saying that to give the National Party a good dose of false hope for themselves…”

ACT Leader David Seymour was lighter on humour, pointing out how against a backdrop of global uncertainty, “people's faith in our politics in this Parliament is at an all-time low ebb”.

“It's been one disaster after another,” he said.

“I think it's fair to say that we have a disaster Government led by a disaster Prime Minister, because, if it wasn't for the disasters, what we would have is a long series of let downs, where everything the parties over there promised in 2017 has been a failure.

“Let me say that that's not a personal critique; I happen to like our Prime Minister as a person, and I admire what she's done holding people together at critical times of disaster. That's not the problem.

“The problem is that the world is changing, and a different style of leadership is required. We require problem solving…

“I believe that this country deserves an open debate, not a state of fear; asking what we can do, not what we can't; going country by country when it comes to the border; working together with, not against, the private sector; and embracing technology to augment our public health response.”

He concluded his speech, referencing ACT’s relatively strong poll results: “I look forward to a group of independent-minded, thoughtful ACT MPs sitting across here, on the cross-benches, supporting a Government far more competent than the one that we have now.”

“National, of course, have settled on a new leader with a new slogan: "Why vote for the lesser evil?"… Ouch!

Another labour party supporter its spreading like Covid , maybe old bloke you can tell me their tax policy's

I can tell you the correct use of the apostrophe.

It must be election year, the character assassins and cowards are out in force!
Martyn Bradbury (The Daily Blog)
James Shaw (Parliament)
Chris Trotter (Interest dot co dot nz)
All part of a concerted smear campaign based on the chilling realisation that the ACT party has solid support and a principled leader in place.

David is a solid human being. If Labour ever want to find their moral compass they just need to knock on his door. Hardest working politician.

Pretty sure Jacinda has been working harder than him for the last 6 months.

Not on policy, evidently. Just on scaring the sheeple.

Yeah you're right, the government didn't pass any substantive policy in the last six months.

It's the only policy they've really enacted in the last three years. Leaving it all until the last minute is something most of us grow out of at university.

They passed 190 bills, more than the National government did in any of their 3 terms.

How many kms of light rail? How many Kiwibuild homes? How much tax reform?

How many flags did National change?

That's about the only policy I can remember them promising. Oh, and not to put up GST.

What does that have to with the points I raised? This is about the current Labour government and what they promised in the 2017 election.

With a giant silver spoon in his mouth. What would he have achieved if he was told to stand on his own two feet? The only reason his party is polling where he is is cause of the absolute shambles that is the National party and their willingness to cut him and his predecessors a deal...otherwise he would be another has been minor party no more popular than Brian Tamaki’s creation.

And just like that, our carbon emissions fell off a cliff just as Parliament adjourned.

Grounding Cindy, Winnie and Shaw because of Covid was the biggest contribution to that. No more breast feeding flights.

For goodness sakes! Do you realise how out of touch you are? You do yourself and whatever you believe in a great disservice with this drivel.

Being out of touch with the hagiography the left are proposing is a positive in my world.

I'm not speaking from the left - but constant carping and sexist claptrap on this site is making me very wary of what you have to say.

Brilliant Rosy! Best commitment in this stream. DC, I recommend this one for Comment of the Week.

Seymour said he is looking forward to sitting on the cross-benches?

Does that mean he won't consider becoming part of a coalition with National?

Interesting whether he'd stick to that if given the opportunity.

In addition to the very clever eyebrows quip, I also liked Winston Peters in the lobby, crowing about finishing the term still in the Government, contrary to many of the pundit's predictions.

Have fun on the campaign trail, Jenée.

If he wants to get away from being the National Party poodle on a leash, he should tell them to shove the Epsom deal and let them stand their best candidate as they do everywhere else!

Count down to the only poll that counts has begun.

That was a bit of fun , now lets get some policy discussion , and quit the personality politics.