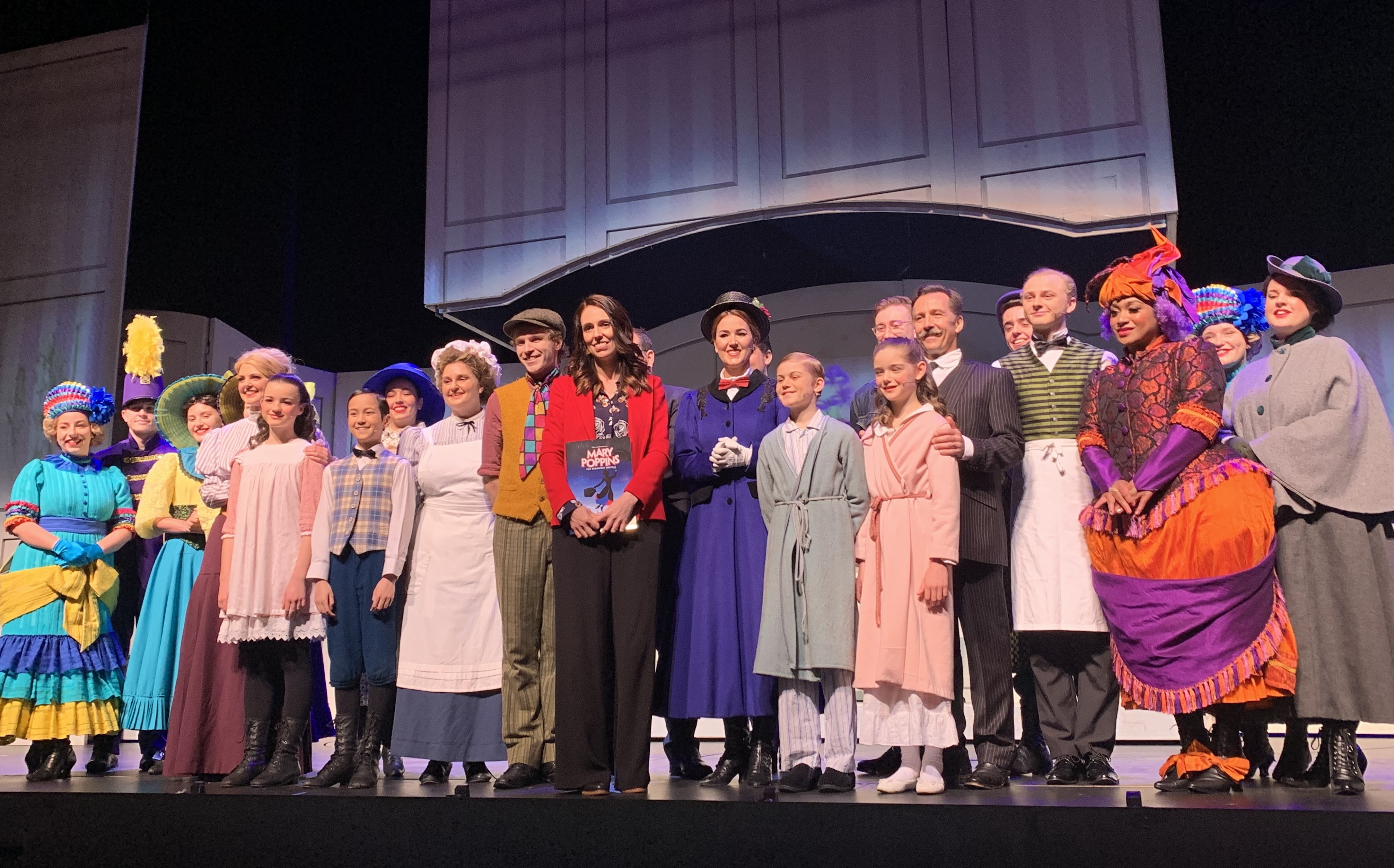 Ardern met the cast and crew of the musical stage show, Mary Poppins, while Collins visited the offices of a company owned by the ‘Chow Brothers’ - famous for making fortunes from the sex entertainment industry, hotels and property developments.

The contrast between the two settings couldn’t have been starker, and played into the stereotypes of the two women vying to be Prime Minister.

But, after Ardern - who was recently dubbed a “socialist” in a British political satire that depicted her as Mary Poppins - smiled for photos on stage, she defended rising house prices in the regions.

And, after the suited folks at Stonewood Homes shook hands with Collins, a procurement director told interest.co.nz he supported a key Labour housing policy - a government underwrite aimed at helping developers secure finance.

The series of events showed the lines between the two parties and their supporters aren’t as clear cut as the presidential-style campaign might lead one to believe.

Asked by interest.co.nz whether she would push ahead with Coalition Government plans to underwrite developers, Collins rubbished the policy but didn’t categorically commit to scrapping it.

The housing agency, Kāinga Ora, is in the process of writing criteria for a Crown underwrite to help developers secure finance at a time banks are tightening their lending, because they’re worried about the economic outlook. If an underwritten house doesn’t sell, the Government will buy it at a below-market price - as it does with houses that meet the KiwiBuild criteria.

Collins said she would have to look at whether the Crown providing this type of security was “feasible”.

“Because it’s a bit like KiwiBuild, but another version of it,” she said.

“When the taxpayer starts underwriting property developers, this is a very slippery slope…

“In many ways, it’s better to simply contract for certain work to be done…

“I’d just be very wary about underwriting property developers. Over the years, some have been very capable and some have gone in and out of business.”

Pushed on how she would help developers secure finance in this difficult Covid environment, Collins was dismissive of the problem: “I’m not sure why that should be any different now.

“I think it’s really important - having been involved in property over the years - to never let a government seriously think it knows how to underwrite.”

However, securing finance is proving problematic.

A net 34% of businesses surveyed as a part of ANZ’s October Business Outlook Survey had a negative view on the ease of securing credit, according to preliminary results.

Developers would ‘absolutely’ take up an underwrite

He said he “absolutely” would take up the offer of a government underwrite “because that gives us the security and flexibility”.

“The reality is Kāinga Ora and the developers would never actually want to access the underwrite, because the opportunity to sell to the market for the intended purpose makes more sense,” Gill said.

He said the price caps, and thus level of underwrite, on KiwiBuild homes (which Stonewood is building) needed to increase in line with the market.

He also supported National’s approach towards reforming the Resource Management Act, and expressed concern over the Government involvement in Ihumātao, saying it put a question mark over the sanctity of contract in other situations involving Special Housing Areas.

House price growth in the regions a sign of economic growth

Turning to Ardern, her comments on the housing market weren’t as “socialist” as her Mary Poppins caricature would suggest.

Asked whether Labour would reconsider introducing further measures to restrict housing demand, given prices are sky-rocketing more than perhaps expected when Labour was writing the policies it would take to the election, Ardern interjected and said: “It’s important to look at what the data is telling us.

“Because interestingly, some of the more recent numbers tell us that in the cities - yes, some growth. But not nearly to the extent that we’re seeing in some regional areas.

“Now some of that is because we have growth in those regions. That’s exactly what we wanted to drive. We wanted those regional areas to see the benefits of primary sector growth, of exporters doing well, of Provincial Growth Fund investment.

“What we need to do now is make sure that in our demand-side and supply-side work, we’re doing enough in the regions.

“There are some areas for instance where we don’t have good public housing… we need to make sure we’re using our tools in the areas where we’re seeing high growth.”

While Ardern didn’t hint at going further to limit demand, she pointed out National wanted to reverse what the Coalition Government had done, including extending the bright-line test from two to five years and ring-fencing rental losses.

Mary Poppins is out of her depth on this one, but so is almost everybody. The best solution is public housing a la Singapore, Austria, and Japan.

John Chow is a nice guy too.

Who would have thought it, after the multitude of crashes and defaults by developers over the years, that any government would open the public purse to underwrite them, it is absolutely absurd.
Risk, Reward, Gain, Loss, they are all part of commercial life and each and every developer must stand on his own merits, past accomplishments and his own capital base and personal guarantees in order to operate.
Let the Government instead stand behind its taxpayers, not the people determined to profit from them.
I vote for the party that has this policy.....who is that.?

That would be the Singing Pig Party. You know - How do you teach a pig to sing? You don't. It isn't going to happen and just makes the pig angry.

It does exclude a lot of people from building houses though. Not only do you need the building and project management skills, you need to also be a gambler or at least understand how to minimise risk. I think a lot more would get built if the government helped with the risk element. They do it to an extent with other businesses: farmers getting handouts in droughts, tiwai getting bailed out to provide jobs, R&D grants, covid payouts, etc.

Ardern is a phoney.

(Sigh) There is no such thing as "... will buy it at a below-market price". Whatever anything sells for IS market price. Either:
(1) No one else is prepared to pay more for it in the market as it is at the time of intended sale, or
(2) The firm holding the asset won't sell it to the Government if it thinks it can or will get more for it from someone else at some stage.
That's how markets and sale price are supposed to operate.
If a Developer can't afford to hold the asset for whatever reason, whatever they liquidate it for IS market price.

Good point. I guess they mean the price that was expected when the project began?

> House price growth in the regions a sign of economic growth.

So just like the last government, high house prices are a problem when you're trying to get elected. Once you're in it's because the country is doing so well or whatever that quote was(think it was Bill English, can't remember exactly).

Yip interesting to listen to Adern now doing a Key. Each year she is in power it goes from being an issue that needs to be resolved to something that is a political tool that needs to be protected.

When you reach the top your horizon changes, you can see more and further, so it's no surprise that Ardern is developing the same attitudes as Key. The environment shapes the organism. Convergent evolution I think they call it.

Aye, but remember the good admiral Nelson, on top of his game then too, had a way to deal with unwelcome matters on the horizon.

It is interesting that National hasn't really pushed the housing crisis, or Kiwibuild failure. Maybe they don't expect to do much better, and when they were in government, it wasn't a housing crisis until they were effectively voted out. . Infact the policies this year just seem so underwhelming, they seem to be two shades of beige.
The housing crisis IMO, apart from Covid, is the number one issue the country faces, due to all the negative effect a bubble popping will cause.

They are both visionless scum who think the solution to insane prices is more subsidies, crony handouts and loading the young to the eyeballs with debt debt debt.

This housing bubble and hollowed out economy will only end with a catastrophic financial crisis and I sincerely hope those responsible for failing to act are held harshly accountable.

What strange writing. Why raise doubt?
The Prime Minister is a Socialist, remember her running IUOSY https://en.m.wikipedia.org/wiki/International_Union_of_Socialist_Youth

But, after Ardern - who was recently dubbed a “socialist” in a British political satire that depicted her as Mary Poppins

This is silly stuff like.
https://youtu.be/g9rsxFaq6Ig
Here PM, while MP running tbe International Union of Socialist Youth. In Hungry.

Er, but, if the government want to own more nice new houses, why don't they just, well, buy them. You know, from, er, well, builders?

This is just a nonsense discussion that seeks to find jobs for diligent and hard working bureaucrats and politicians who cannot see the wood for the trees.

Of course a business would take up an option that reduced risk for them....