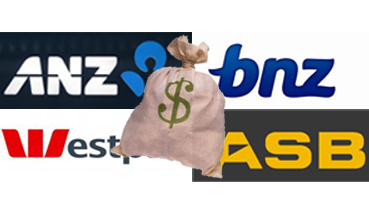 New Zealand's big four banks are even more profitable than their Australian parents, who've been anointed the developed world's most profitable by the Aussie media thanks to figures released by the Bank for International Settlements (BIS).

Interest.co.nz decided to break the New Zealand banks out from their Aussie parents and see where they placed. The average pre-tax profit as a percentage of total assets across New Zealand's big four - ANZ NZ, ASB, BNZ and Westpac NZ - came in at 1.39%, based on information contained in their general disclosure statements. That's 20 basis points higher than their Aussie parents.

New Zealand's banks placed fifth lowest in terms of loan loss provisions at 0.15% of  total assets. The addition of New Zealand sees Australia's banks slip to seventh given their 0.19% score.

In terms of operating costs as a percentage of total assets, New Zealand's banks were equal sixth lowest at 1.21% with Germany. The Aussies were fourth lowest at 1.17%.

BIS ranked each country based on its major banks. For Australia this included the big four - the ANZ Banking Group, ASB's parent Commonwealth Bank of Australia, BNZ's parent National Australia Bank, and the Westpac Group. For Austria and the Netherlands BIS included just two banks and for the USA nine. See more on the NZ banks in this half-year results wrap here. 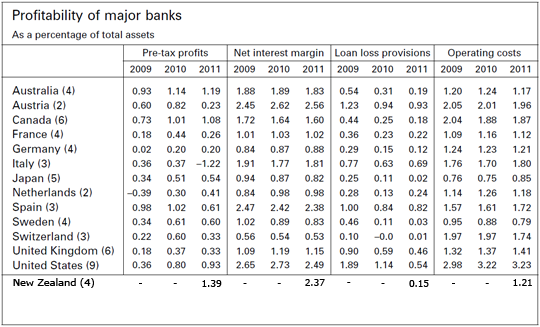 *For this calculation we used ASB's 2011 calendar year figures.

Little wonder our CA deficit has blown out

You are right Boatman –  again those bloody green bastards.

On reflection , maybe its time to front foot this whole thing and

b) Insist that if you are a multinational like an Aussie Bank , McDonalds , KFC , GE , etc that you must have a parrallel listing of your shares on the NZX .

No Company will walk away from investing in such a profitable place like NZs , so they would rather comply .

We get a bigger Bourse , and a wider investment net for Kiwisaver etc .

1 - Why would anyone voluntarily want to be associated with the likes of companies such as Allied Farmers, PGG Wrightsons, NZ Farming Systems, ICP Bio,
Montana, Feltex, etc.. Where the old boys look after themselves and Ma&Pa's money ranks behind everyone...

3 - Financial markets are easily accessed. An NZ investor can easily phone an NZ broker and buy stocks in the USA, Canada and
Europe.

4 - What benefit does an NZX listing give a Kiwi investor? The other exchanges require greater disclosure, have better rules and have significantly more enforcement where real penalties are brought down

5 - NZ is a backwater financially, just a place for rich foreigners people to store money in a nation at a low risk of war and any country specific risk (We won’t nationalise the assets). Where buying over the top for rural land makes sense as a protection from inflation and from capital loss. i.e. James Cameron,
Harvard University, the significant number of high country stations and CBD buildings owned by Foreigners.

Okay GF , here is my reasoning ,

Give some fat to the NZX and the shockers you have listed would not last week..

Secondly , if I buy shares in Shell or BP in London the dividends are taxed at source , and THEN you must declare the income in NZ and pay tax ( or the diffrrence ) on top of your taxable income in NZ

This is after incurring the costs of conversion , etc etc

Thirdly ,  the income is not a PIE investment , so its immediately a disadvantage to Kiwi investors , which then encourages Kiwis to buy dogs like Allied Farmers and Feltex.

Restaurant Brands is a winning stock by the way , so it re-inforces my argument that the bigger international firms here should be represented by local interests and accessible to Kiwi investors .

Lastly , its common practice Wooloworths in the Middle east has local partners owning 50% , BHP has a dual listing in South Africa stock exchange . The worlds biggest brewer SAB MILLER brews beer in China and has 50% Chinese ownerhsip in its China operations.

Agree with you Boatman. BHP is also listed in Sydney, and London, and New York.

But on the other hand their service is the worst in the developed world!

focusing on their profitabilty off course.

Try opening a bank account in the UK. It takes fricking days and days... unlike NZ where its done in front of you

Try getting an electronic payment to go threw in the UK or USA again it takes days... NZ it can often be done in 2-3 business hours

Try getting one of these A/Cs in NZ

Try linking your accounts, or sorting out an account error, investing in one of the banks recommended funds i.e ING frozen funds - then getting screwed, or borrowing to people who cant afford it. Try talking to your personal banker who can hardly speak english. Front line staff cut backs so your dealing with some anonymous corporate.

Yeah I see what you mean?

its really a brillant goverment plan soak up all the consumer $$ slow growth and stop circulation effect its working.  Quick lets sell kiwi bank to keep the free market functioning it would be rude not to.

Act would sell Kiwibank off to the Australians tomorrow, to make our situation even "better".

Dont worry Act are a minor foot note of history.....

You mean this article is part of a secret government plan, malitiously spreading the rumour that bank profits are winging their way over to Australia. Once all the backlash dollars are captured (in the bank) the government are going to sell it? Only a very twisted individual would come up with that concept.

The reason they are the most profitable is because of the $2billion per year subsidy from the government. The government is paying the rent and mortages of 1 in 5 households with the accomodation subsidy. Even the Greens and Salvation Army have complained vociferously about this subisdy to the government. It drives up house prices, not letting them fall as in other countries, and is a subsidy to landlords and the banks. Easy money.

Wouldn't be so bad if Kiwi Bank looked at my mortgage application seriously few years back..  I applied and they turned it down within 5 minutes flat, because I changed job 3 months earlier.

Went to the Aussie bank and they took me on with opened arms..  Ok.. I made them rich (sort of)

I would like to take a minute and thank all the banks in New Zealand for the wonderful service they provide and all the hard work they do – without finance services nothing whatsoever would be possible. We would all be in the stone age or toiling as hunter gathers looking for berries and mushrooms in the forest…

But with the advent of imaginary computer digits that sit on a centralised server somewhere and pass from one account to another, things have moved on. I trust whole heartedly in these imaginary digits, in fact I am off to work now to try and get a few more digits so I can rub my plastic card thingy in the Pack and Save slotty thing where the minimum wage girl makes the beepy noises at the front of the shop.

I am so proud of all the hard work you banky people do, please keep it going because I don’t want to go back to searching for mushrooms in the forest – Remember, no matter what the #occupy and other people might say, without the tangible contribution you make to society (your work represents more and more of the overall GDP each year) we would all be a whole lot worse off.   If you want to clip the ticket a bit more on my imaginary digit transactions please do so because a paltry return on your significantly hard earned investment after accounting tricks of only about 1.2% is just not enough reward for what you do.  You are too fair.

It's interesting that Kiwibank was sort of posed as the alternative to the fat cat banks for kiwis and kiwis have benefited from this. I have no problem with Kiwibank. Now that we need an incentive to get the fat cats to drop their floating rates Kiwibank is probably being told to maintain the profitability hence keep rates as is...... Bugger!

Does this mean NZ Banks are better at cooking their books than the overseas counter parts? http://j.mp/L32BnJ