Latest bank satisfaction survey shows that ANZ is learning from the National Bank without dragging it down, and some banks have improved substantially

Latest bank satisfaction survey shows that ANZ is learning from the National Bank without dragging it down, and some banks have improved substantially 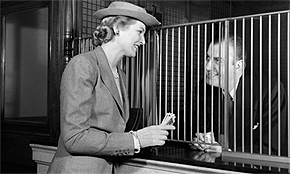 The good old days - but how do we rate customer satisfaction now?

The latest satisfaction survey results released by RoyMorgan Research shows that customers of the National Bank held a significantly better view of their bank than did the customers of the ANZ.

The August 2012 data showed that 80.7% of their customers were "very or fairly satisfied" with the National Bank, while 74.7% of ANZ customers held that opinion of their bank.

But while ANZ still trails the others it has improved substantially since 2003 when it took over the National Bank.

In fact, ANZ's customer satisfaction percentage stood below 60% when this survey started in 2002. The August 2012 represents the biggest improvement of any bank in the survey.

A feature of this ten year review is how the under-performing institutions have lifted their game toward the higher-performing competitors. There has been little industy slippage.

Kiwibank has maintained the highest customer satisfaction for the past two years among New Zealand’s six major banks.

This research shows that the two banks have similar numbers of customers - National has a banking relationship of some kind with 21% of New Zealanders aged 14 plus and ANZ has a relationship with 20%.

However based on $ value the National Bank market share is higher - around 16% while the ANZ is around 11% - due to the National Bank’s customer profile - more products and a higher dollar value per customer.

"It is also important to remember that the banking market in New Zealand is not standing still," said Levene. "Kiwi Bank has increased its position in the market at the expense of other banks."

"The Roy Morgan State of the Nation shows New Zealanders are changing the way they bank - fewer are visiting branches (52% now visit a bank branch in an average four week period, down from 62% over a decade ago) and 48% are now using the internet to bank. So banks are having to invest heavily in technology platforms to provide the services their customers need and want."

“Brand changes are always undertaken with a degree of trepidation as the relationship between brand and customer is complex and generally enduring and is often little understood. Our experience at Roy Morgan Research is that those banks who takeover other strong brands successfully are those who understand their customers and those of their takeover and communicate with them and satisfy their needs and wants better than any other competitor."

Disatisfied, or even patriotic satisified, bank customers should switch to a NZ owned bank such as Kiwibank, SBS, PSIS or TSB and help claw back some of the $2 billion in profit that goes off shore to Australia.