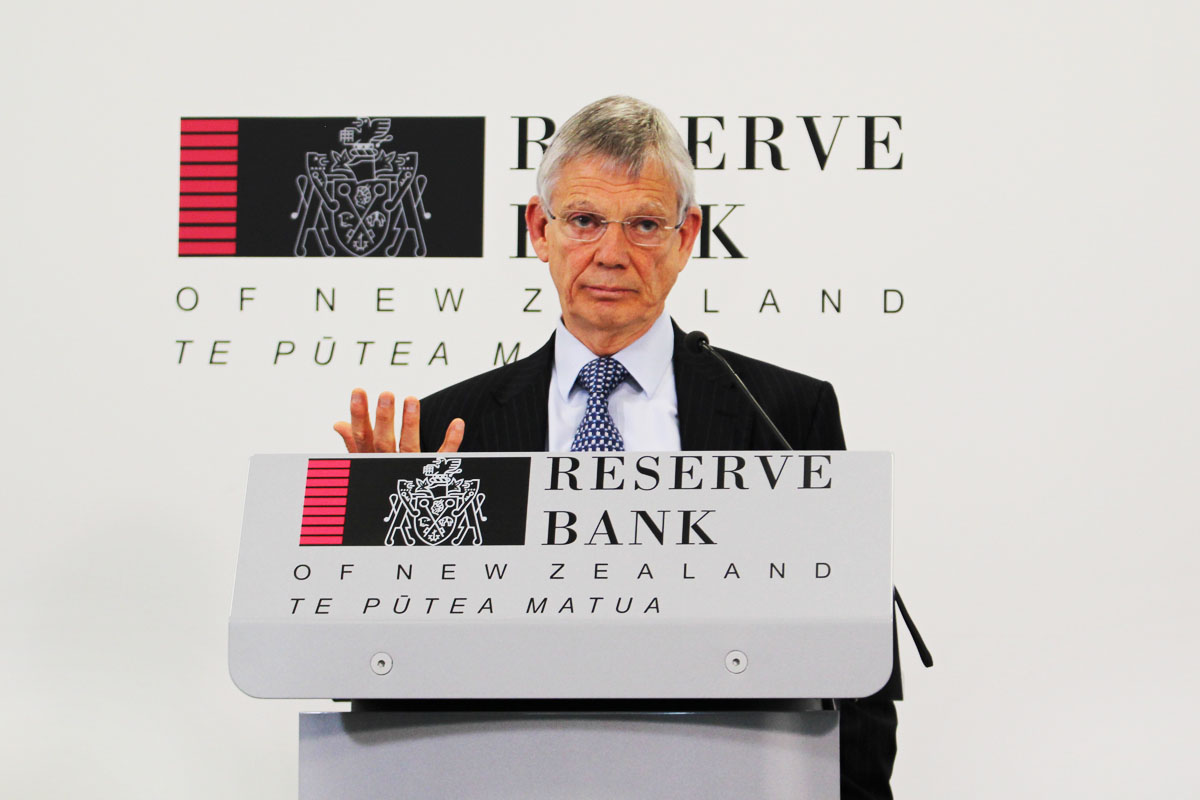 Often that refers to the Government controlling spending to remove some of the inflationary pressures from a fast-growing economy and therefore helping the Reserve Bank to keep interest rates lower than they otherwise would be. That was certainly the case from 2006 to 2008 when then-Reserve Bank Governor Alan Bollard made veiled warnings to the-then Labour Government to help the Reserve Bank control inflation that was threatening to break out the top end of the 1-3% target band by running bigger surpluses.

Now the balance is the other way around and the Reserve Bank is battling to get inflation back up into the 1-3% target band. Reserve Bank Governor Graeme Wheeler cut interest rates today to help do that, but was painted by economists as a 'reluctant cutter' who is also forecasting no more cuts in the Official Cash Rate from its current 2.5%.

So how can he boost economic activity and inflation without further cutting interest rates? One way is to ask for some help from your fiscal policy 'mates'.

Governor Wheeler took the unusual step (for him) of calling today for a little help from his 'mates' in the Government, in the form of increased spending, specifically on infrastructure in Auckland. Coincidentally, shortages of rail, roads, hospitals, schools and other infrastructure needed to support housing development is also a factor restraining Auckland housing supply and driving the unsustainable house price inflation that the Reserve Bank considers a risk to financial stability, and which Wheeler has said he thinks about when setting the OCR.

Wheeler even cited clause 4b in his Policy Targets Agreement that relates to financial stability when explaining why he would not cut further and had forecast a flat OCR to December 2018, even though the bank had lowered its inflation forecast and delayed the expected rise in inflation to the 2% mid-point of the range by more than a year until December 2017.

Wheeler was asked at the news conference for the Monetary Policy Statement if the Government could be a 'mate' by loosening monetary policy.

"A lot of the focus tends to be on monetary policy to work out price output splits for an economy to try to get some demand growth and output growth and also maintain low inflation," Wheeler said.

"One of the issues is what role can fiscal policy play," he said.

"One could mount a case for saying there's the potential to have more infrastructure spending around Auckland."

Wheeler said the economy was generating output worth NZ$230 billion a year.

"So some capex expenditure by the government could well be helpful to try and reduce excessive capacity in the economy and, from our point of view, reduce the output gap and build inflation pressures, so that would be something that would be helpful."

Wheeler was then asked if the Government should be more flexible with its fiscal policy, rather than simply target a surplus and stay there. Wheeler said he would not comment on the specifics of the last year, but would comment generally.

"The general point I'd make is that one shouldn't as a policy maker...don't just always look to monetary policy to affect levels of demand in the economy.  Fiscal policy can also play a role and arguably there is a case for more infrastructure related spending around Auckland."

Are you somehow under the impression that immigration is not controlled?

It's fair to say the tap is pretty widely open, with convenient loopholes for many people to get through. Most people I think understand the need to allow in people filling skills shortages. The cases for other categories, including investment and education, seem to have been less well made in terms of their macro impact on the NZ economy and lifestyle generally.

It's quite amusing to see people who've never been through the immigration process complain about the foreigner bogeyman.

As someone who got in under a laxer regime than today, working in an industry with occupational shortages, it wasn't exactly just showing up and getting the visa.

However, I do think that people who have not been taxpayers (e.g. elderly parents) should have restrictions on benefits they receive. The Tier Two parent category is currently a loophole you can drive a One Child Policy bus through, Tier One requirements ($500,000 in settlement funds + lifetime income guarantee) seem more reasonable. It is a privilege for their children to get to have them live here with them.

Once upon a time in new zealand most employers took on school leavers as trainees, apprentices with apprenticeships, cadets with cadetships. They trained them with an eye to the future workforce of the business

That's no longer the case. No training. They want them ready made. Organisation gains one skilled import while society eventually picks up the responsibility for 1 accompanying spouse, 2+ children, and potentially 4 late age parents. No cost to the employer who can later dump the import at will and leave society with the total bill

When we train our own, the siblings and 2 parents and 4 grandparents are already here, possibly home-grown

Businesses no longer want to train people. Bring them in.

In our community we have a number of ag-contractors, (all private), of those, one is large with a number of employees, another moderate sized. Among the employees of the larger contractor are two young guys in their late 20's early 30's, one an englishman the other a scotsman. Heard on the grapevine yesterday, with the dry summer already being felt and work drying up, english and scot will be laid off, given the flick, just after christmas while the mid-sized guy will try and hold his crew together

Certainly fiscal and monetary policy should work together, where you get the feeling Bill English has stuck to his balanced budget target as an ideological personal objective, regardless of whether it is in NZ's economic interest. Note that it is never a good idea to squander government money on useless activities; it would be better to give it back to taxpayers as tax cuts. But infrastructure is in clear need of investment.
An unstated potential catch in Wheeler wanting mates, is in how a deficit might be funded. If it were funded by borrowing off foreigners, then you would expect the NZD to appreciate through the process of the foreigners buying NZD to invest here. And that appreciation becomes monetarily tightening, defeating the purpose. If it's funded by borrowing from NZers, then that is also potentially tightening.
There is an alternative, but I'm not sure Wheeler isn't too conservative for such options.

What he's saying is the GDP growth is at risk and money should go into something economically useful. Rather than just be poured into the housing bubble.

The RBNZ wants what the government wants: Communism- not the messy old proletariat type but the slick China model with vested favourites' (Banksters etc)noses in the trough. The masses all in debt and working like dogs to pay for consumption (they are compliant then).
There is nothing ordained good about inflation - it just helps all the above - the 1989- mid 1990's RBA target was 0-2%. And that (section9) target is only to support s8 which is about "stability in general...prices" .
And - note the recent move to decriminalize cartel in NZ; these things are not unrelated. Civil penalties (a la USA non prosecution agreements post-GFC ) are hardly scary when Corporates can just borrow money for free!

"Communism- not the messy old proletariat type but the slick China model with vested favourites' (Banksters etc)noses in the trough." AKA Oligarchy.