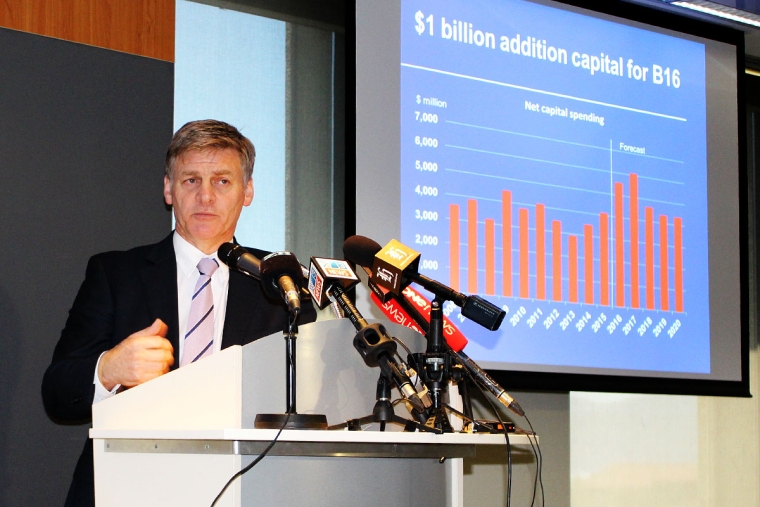 The Government has loosened fiscal policy in its Half Yearly Economic and Fiscal Update (HYEFU) by allowing the Budget to dip back into deficit and by increasing its capital spending allowance by NZ$1 billion in the current year.

Finance Minister Bill English said the Government had taken note of the Reserve Bank's call for more infrastructure spending to help bolster economic growth and inflation, although he stopped short of saying he had deliberately moved to become a 'monetary policy mate'.

He said the increase in capital spending was coincidental to the Reserve Bank's call and was more linked to the flow of capital spending requests coming from within Government, including spending on new schools, transport and the IRD system rebuild.

English's comments came as he and the Treasury released the Half Yearly Economic and Fiscal Update, which includes fresh economic and Budget forecasts.

Treasury reduced its forecast for economic growth in the year to March 2016 to 2.1% from 3.1% in the May Budget, in part due to slower growth by New Zealand's trading partners and partly due to the predicted effects of a significant El Nino event. Treasury increased its unemployment rate forecast for the year to March 2016 to a peak of 6.5% from just 5.1% at the Budget.

The end result was a reduction in Treasury's forecast for the Budget (OBEGAL) balance to a deficit of NZ$400 million in the current 2015/16 year. It had forecast a surplus of NZ$200 million in the May 2015 Budget. OBEGAL stands for Operating Balance Excluding Gains And Losses.

English said the Government had adjusted its targets so as not to strictly target continued surpluses and had loosened its target of reducing net debt to below 20% of GDP by 2020.

"The books are broadly in balance, so in the immediate future we will not distinguish between forecasts of a small negative or small positive OBEGAL," English said.

He said the Government had increased its capital allowance by NZ$1 billion at today's HYEFU given the Future Investment Fund, which was created from the proceeds of the sales of state assets, had been used up.

"Given the pipeline of high quality investment priorities, we consider it is an appropriate time to provide additional funding," he said.

Treasury's measure of whether the Government had loosened or tightened fiscal policy -- which it calls the fiscal impulse -- showed an expansion of fiscal policy worth 1.4% of GDP.

The fiscal impulse was higher than 0.6% forecast fiscal impulse in the May Budget for 2015/16. In May the following three years were expected to contract the economy by a combined 1.9% of GDP. The HYEFU forecast a combined contraction of 1.6% of GDP.

Meanwhile, the later return to surplus and the extra capital spending has delayed the Government's return to a net debt to GDP ratio of under 20% by 2021/22, which is one year later than forecast in the May Budget.

The increased debt also meant the Government has delayed the resumption of contributions to the New Zealand Superannuation Fund to 2022/23,  two years later than forecast in the May 2015 Budget.

The return to a deficit in 2015/16 and the increase in capital spending meant the borrowing programme by the New Zealand Debt Management Office in 2016/17, 2017/18 and 2018/19 would increase by a combined NZ$6 billion over those three years. The borrowing programme for 2015/16 would remain unchanged at NZ$8 billion.

(Updated with picture, details on borrowing)

Not surprised at all.

Parliament will not sit again until February so loose lips and slippery tongues will get off scot-free during the silly season.

I wonder if they will put money towards the city rail link sooner.

"as more linked to the flow of capital spending requests coming from within Government, including spending on new schools, "
we need somewhere for all the extra children brought in to go, does this mean that the education spend will also rise.
so much for mass immigration only bringing benefits

LOL - US Fed officials forecast US 2% inflation for the last four years, in error. I expect nothing different here.

.....and i bet most of it will be on tarseal so Awklanders can escape the most liveable city in the world for a weekend break.

Auckland has the best lifestyle with 6 or more people in a single household.

Tsk, tsk, silly Billy thinks we are on a gold standard, he doesn't know how modern money works. Sad, really. He is Michael Cullen the Second. Give us a tax cut you stingy so and so!

It’s not hard and there’s no economist who would not have that in his forecast if that was to happen, but the policy makers don’t think it’s necessary. They believe we just have to wait more time for these interest rates to kick in, and they’re willing to do that, and they’ve been waiting, again, 20 years in Japan, seven years in the U.S., and six years in the European Union. What I’m saying is, make the fiscal adjustment, if the interest rates do kick in like you think, just reverse the fiscal adjustments. If the economy starts getting too hot and unemployment drops too far and everybody is worried about inflation, then go back to three percent. You don’t have to stay there forever if things heat up too much for you–I don’t think they will, but should that happen, it’s just as easy to go back in the other direction.

Basically, why are Bill and the RBNZ choosing high unemployment and a too high exchange rate? Read the link, their advisors are utter plonkers merely repeating the misunderstandings of others.

So government debt is to be increased. Heading exactly the wrong way.

Before you know it the RBNZ will be forecasting rate hikes to confirm the new debt funded growth.

At this rate all the babyboomers will be retired before the government starts saving for the boomers retirement. Don't worry, Gen X/Y/Z seem happy to pick up the tab.

The saving was started, just suspended by the Nats. Superfund was solely intended to fund the boomers' retirement.....

The Rt Hon Member for Dipton was expecting a consumption led recovery not long after coming to power some 7 years ago. It didn't happen and it's not going to happen again in 2017 regardless of the planned tax cuts. That's right, let's borrow so we can deliver tax cuts!@!!

Who says these guys are fiscally responsible? I know that it's in vogue for some corporates and SOE's to borrow to pay dividends but really, isn't it time that we all just started living within our means instead of trying to defer the inevitable day of reckoning.

By the way, has anyone ever seen an analysis of the impact that Auckland house prices have on the NZ economy? How much money does a 10% or a 20% increase in house prices suck out of the local economy? Whether the money is borrowed or paid from savings seems irrelevant as either way, the money that I might spend at local businesses is either paid in interest to an Aussie bank (probably) or is sitting as equity in my flash new abode. It's certainly not going to the local car dealer or travel agent or whomever else might benefit from me feeling a bit flush because I don't.

I know, we'll ask one of those vocal bank economists to do something useful and work out some numbers on the back of their fag packet and see what they come up with.

There were no tax cuts, taxes went up on purchases of goods and on businesses (via removal of depreciation allowance on buildings) and down on incomes.

Had there been significant real tax cuts then we would have bounced back much faster with resulting higher employment, higher interest rates and slightly higher government debt but lower house prices and greatly lower private debt.

The government should run a deficit until full employment is reached, then balance the budget, not before. Otherwise you get loss of skills and an increase in unemployables and criminals.

Unemployment rate to increase by 27% in next 3 months

(a) estimating unemployment rate will increase by 27% by March 2016, (from 5.1% to 6.5%) and
(b) acknowledged that the increase is largely due to high rates of immigration

Is that complacency or what? New Zealand must be sedated or something

Don't forget that the Government has flagged that it is going to allow truck sizes to increase again! Thus it needs more money to spend on roads to fix them up after the trucks have wrecked them. It can't make the truckies pay for that damage as the truck companies will go to the wall, they don't want to support Kiwi Rail because that might look too much like being a greenie and actually making economic sense. Thus all kiwis will be subsidising the truckies at the expense of other parts of the economy that would likely provide greater benefit.

And all the while John Keys popularity surges ahead. I despair.

"The change in maximum allowable weight for general access to the road network from 44 tonnes to 45 tonnes will be available only for vehicles with 8 axles or more. These have less impact on road wear than 7‑axle vehicles carrying 44 tonnes."

because as soon as you mention our immigration settings are too high for this part of our economic cycle, every man and dog comes out and calls you a racist.

Most people who have a job and a big mortgage have been dragged into the property ponzi, and therefore must support immigration to help keep their house price up. It's a warped world we live in.