English says unfair to say Wheeler has failed to meet his performance target on keeping inflation around 2% when global inflation is very low and NZ economy is growing faster than 3%; says 2nd term up to board

English says unfair to say Wheeler has failed to meet his performance target on keeping inflation around 2% when global inflation is very low and NZ economy is growing faster than 3%; says 2nd term up to board 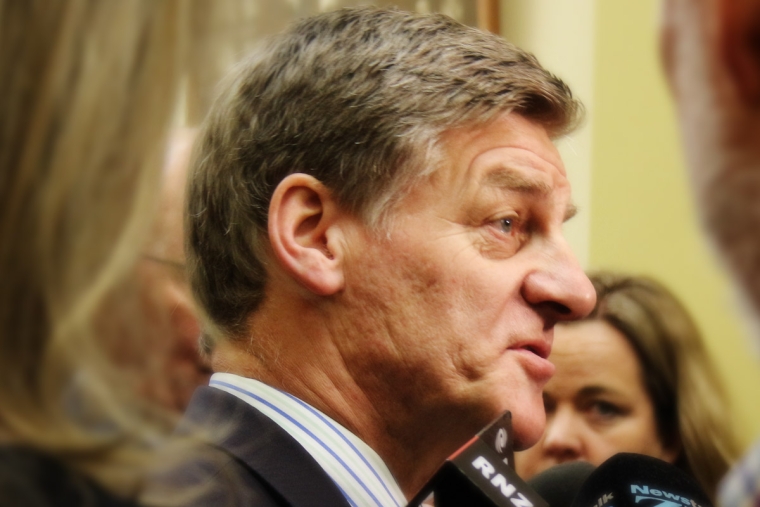 Finance Minister Bill English has defended the performance of Reserve Bank Governor Graeme Wheeler in meeting his inflation target, despite CPI inflation averaging 0.8% over the Governor's term which is well below the 2% mid-point English and Wheeler agreed in 2012.

Last week the Reserve Bank again delayed its forecast return of CPI inflation to the 2% mid-point of Wheeler's Policy Targets Agreement with English by another nine months to September 2018, which would mean CPI inflation had been below 2% for almost 7 years and would not have been at or above 2% during the Governor's entire five year term to September 2017.

The Reserve Bank forecast CPI inflation, which was 0.4% in the June quarter, would return to the bottom end of the bank's 1-3% target band in the December quarter of this year, which would imply inflation was below the target band for a full two years. The New Zealand dollar rose last Thursday despite Wheeler's comments about the currency needing to fall because financial markets had expected a more aggressive easing than the 25 basis points delivered. Some economists are forecasting annual deflation in the current September quarter and the currency is over 5% above the Reserve Bank's forecasts, implying yet more deflationary pressure.

English was asked if the Governor had failed to meet his PTA target with English.

"I think that's an unfair assessment in the circumstances," English told reporters in Parliament.

"If world inflation was 2-3% and we were wandering along at 1% and had high unemployment then I think you could say that," he said.

"But the fact is we're dealing with the threat of deflation around the world. Fortunately New Zealand is not in that position because deflation is regarded as a real problem for economies, for households, for returns on savings, a real problem for businesses and the Reserve Bank has got to deal with the fact that most of the developed world is dealing with 0-1% interest rates."

English said any assessment had to take into account that the economy was growing at faster than 3% with stable interest rates and moderate wage growth.

"These are characteristics of an economy that is actually succeeding, not one that's failing, and that's the important context of the discussion you have about the Reserve Bank," he said.

"Whatever the niceties of Reserve Bank monetary policy, the fact is the economy is producing jobs, it's lifting incomes and that's relatively unusual."

'It has room to move'

English agreed that CPI inflation was not in the target band.

"But any reasonable person would think that it's quite difficult when you've got a deflationary effect around the world, where deflation has become the big threat, rather than inflation. Our Reserve Bank is trying to achieve the target in a global context where inflation is zero and interest rates are negative in some places," English said, adding it was challenging for the Reserve Bank to hit its target.

"Every time he reduces interest rates he gets advice that that's pouring fuel on the housing market, so the dilemma is well understood. The Reserve Bank is trying to reach its inflation target. It's trying to do that against the background of very low inflation and dropping inflation around the world and it's trying not to pour too much energy into a pretty vigorous housing market."

English said the Reserve Bank had room to cut the Official Cash Rate by more if it thought it needed to.

"The Reserve Bank does have more room to move if it decided that is what it wanted to do. It seems to have signaled that it's keeping that in mind in the last statement. That puts them in a better position than central banks around the world where in most developed countries they're into quite extraordinary monetary policy trying to achieve some inflation," he said.

"That's a matter for the Governor, and in any case the board of the Reserve Bank deals with the issue and makes a recommendation to the Finance Minister," English said.

"But the fact is we're dealing with the threat of deflation around the world. Fortunately New Zealand is not in that position because deflation is regarded as a real problem for economies, for households, for returns on savings, a real problem for businesses and the Reserve Bank has got to deal with the fact that most of the developed world is dealing with 0-1% interest rates."

Another apologist for blatant asset bubble generation under his watch over the RBNZ.

Transferring wealth from one cohort of society to enrich another is not a policy that should be delegated to an unelected, but supposedly independent, state entity minus a political mandate to undertake such duties.

But how about asset price inflation and Bubbles? Well, there is a powerful proclivity for letting asset prices run. An inflationary bias in asset markets certainly “makes it more profitable to speculate than to produce.” And the larger the speculative Bubble the more powerful the constituencies that arise to demand government involvement, intervention and manipulation to sustain Bubble Dynamics. Misguided policymakers will endorse destabilizing asset inflation as confirmation of sound policies (Greenspan, Bernanke, Draghi, Kuroda…). In one of financial history’s most misconceived policy blunders, central bankers specifically targeted asset price inflation as the primary mechanism for post-crisis system reflation. Read more

Always appreciate your ability to see through the muck and add to thought. Keep it up.

There is a real cost to individuals and firms when the Governor doesn't get it right and keep within the target band........pricing interest rates higher than what they should have been has cost business dearly......what happens if those businesses decided to get together and take action against the RBNZ for those added interest costs?

Personally I see the PTA as the rules of engagement and conduct to be expected....it is the published contract of expectations........the fact is the OCR has been constantly on the wrong side of the agreement and I would have thought this met the definition of price rigging!!!

...what happens if those businesses decided to get together and take action against the RBNZ for those added interest costs?

The bloated cost of productive farm land included? Which hasn't turned out well for others.

Six years ago we wrote a post entitled "Is TIAA-CREF Investing In Farmland A Harbinger Of The Next Asset Bubble?" in which we predicted that "farms (or "real assets" as they are known in polite company) are about to become the next big bubble." Turns out we were right as Midwest farm prices are starting to crash (see our recent post "Farmland Bubble Bursts As Ag Credit Conditions Crumble").

But the Midwest is not the only place where farmland has bubbled over. California farmland has been bubbling up for years now with unplanted farm ground with "decent" access to water currently selling for $20,000 - $30,000 per acre. Land with mature almonds, California's cash crop, is more likely to trade at $30,000 - $40,000 per acre. This bubble, like so many others, has been caused in large part by institutional capital "reaching for yield" in a low interest rate environment...yet another Fed bubble lurking under the surface.

The plan was relatively simple, in the absence of attractive fixed income yields, large asset managers (like TIAA mentioned above with $850BN of AUM) decided to purchase hard assets like farmland instead. Farmland could then be planted with the highest value crop, which just happens to be almonds in California, to drive attractive ROICs on invested capital. Read more

The RBNZ is engaged in central planning of the economy and all it's doing is growing asset bubbles instead of looking at long term financial stability. The purpose of monetarism was to avoid depressions and recessions by providing liquidity. Now it's gone beyond that with the transfer of wealth to wealthy asset holders and central banks.

Central banks buying back their own bonds makes a degree of sense but if you look at Japan and China propping up their stock markets with massive share purchases they are not allowing the market to operate in a wide enough range. It seems that everything in the world has become too big to fail. If this carries on until the real recovery occurs we are running the risk of multiple large bubbles bursting at the same time in the next decade.

Imagine if the RBNZ got what it wishes for, 2% inflation, and had to raise the OCR to 4 or 5%?

Central Banks really have the wrong model, they have created debt fuelled growth for a generation. let politicians avoid the difficult decisions and make promises for votes that have saddled the next generation with a dire economic outlook. Like Cullen before him English has ridden the CB train to the detriment of the long term viability of NZ.

Why are you blaming the RB? its successive Governments and I include 3 terms of Labour in that. But of course its what the voter wanted, so really who is to blame again? why us.

The economic model was always going to fail, you cannot have exponential growth on a finite planet for ever.