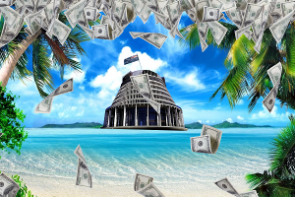 Below is a press release issued by the Green Party co-leader James Shaw.

Fewer than 70 out of 11,645 New Zealand foreign trusts have reregistered under tougher new disclosure requirements with only three weeks left to go before the final deadline, the Green Party said today.

Parliamentary questions lodged by the Green Party also show that IRD has proactively de-registered 1,797 foreign trusts since February (see below).

“New Zealand was gaining a damaging reputation as a tax haven but National still had to be dragged kicking and screaming to review our foreign trust rules.

“Why did the Government allow this dodgy industry to boom before doing something about it?

“We’ve discovered that less than one percent of foreign trusts have re-registered three weeks out from the June 30 deadline. Close to 1,800 have proactively been de-registered by IRD.

“It’s becoming increasingly clear that New Zealand foreign trusts were being abused on a big scale.

“Nobody, except the National Government, should be surprised by this: New Zealand foreign trusts were being marketed overseas as vehicles to hide wealth, making them attractive to criminals and tax avoiders.”

The Green Party have been pushing the National Government to require greater disclosure from our secretive foreign trust industry since 2013.

- “The Panama Papers gave us a glimpse of how New Zealand foreign trusts were one way to make dirty money disappear,” Mr Shaw said.

“We also found evidence of how the foreign trust industry was using its influence with senior National Government ministers to stop IRD from investigating their activities further.

“After intense public and political pressure, we’re now looking at the end of a shady little New Zealand industry.

- “Holding foreign trusts to higher disclosure requirements will improve our international reputation, which is worth way more to us than the small industry that serviced them here in New Zealand,” said Mr Shaw.

The answers to written parliamentary questions:

What is the total number of New Zealand foreign trusts, if any, currently registered?

Revenue Minister, Hon Judith Collins: I am advised that, as at 31 May 2017, 49* foreign trusts have reregistered under the new regime which came into force on 21 February 2017. This regime requires all NZ foreign trusts to adhere to stringent guidelines in order to remain registered. Foreign trusts have until 30 June 2017 to register.

How many foreign trusts, if any, have been de-registered by IRD this year?

Revenue Minister, Hon Judith Collins: I am advised that 1,797 foreign trusts have been deregistered from 21 February 2017 (the date of enactment of the new regime) to 31 May 2017.

* Number has since been updated by IRD.

Tax Heaven - NZ is a tax heaven for a reason.

Being a Tax heaven is also may be a sign of prosperity for current government.

Quote "New Zealand was gaining a damaging reputation as a tax haven but National still had to be dragged kicking and screaming to review our foreign trust rules".

“Why did the Government allow this dodgy industry to boom before doing something about it?"

Do we know just how tougher new disclosure requirements are meant to be or it the wet bus ticket approach again?

We know how much National likes to cling to the false economy that it's created and money laundering is a key part of their false economy revenue stream so I can't see them wanting to do much about it if they remain in power.

NZ needs to vote for party's that support "the many not the few".....

This is the smoking gun that really caused Sir John to jump.

OH NOES the corruption zombies are erupting from their graves!

James Shaw may be right i don't know,but has there ever been a time when he has spoken in a positive manner about anything.
Angry Andrew and Sour Shaw should be a great combination.

Don't be coy
Who were these senior Government Ministers?
Did this nugget of information ever see the light of day and reach the public domain
Did Mr Shaw "blow the whistle"? Who was doing the lobbying? Who was being lobbied?
quote: “We also found evidence of how the foreign trust industry was using its influence with senior National Government ministers to stop IRD from investigating their activities further"

Why do we find out about this now?

I think he's referring to this; - http://www.interest.co.nz/news/81311/documents-show-john-keys-personal-lawyer-successfully-lobbied-him-and-revenue-minister

Anyway, let's have round of applause to interest.co.nz for doing a lot to expose this squalid business, however much we Kiwis may prefer to ignore it. The untold millions must be told!

"The untold millions *minions must be told!" Fixed that for you!
(noun: *minion - a follower or underling of a powerful person, especially a servile or unimportant one.)

At least something has been done about it and hopefully not an issue going forward.

When I wrote about the foreign trust rules that come into force on July 1, tax experts told me it would be effective, although that looks to be true only if NZ has a tax treaty with the other country involved. (Malta is a worry and we don't have a tax treaty with it.) The Sarawak Report has covered our involvement with the 1MDB scandal in a damning post that's well worth reading. I wrote about the foreign trust situation in NZ here: http://www.noted.co.nz/money/economy/new-zealand-the-little-tax-haven-th...

Link brings up an error?

When this scandal first surfaced did not the then PM Mr Key say simply & quite clearly " New Zealand is not a tax haven" & was this not echoed loud and clear by all his underlings, all in unison as usual? So Mr Shaw is obviously quite correct in his assertion that the exodus of all these bogus trusts quite clearly proves New Zealand was in fact a tax haven, because why else the exodus? Mr Key created Corporate New Zealand whereby being a crony to big business and associated niceties like this trust set up, has dominated and eroded the rights and livelihood of its citizens. If Labour cannot perceive that this offers an election platform of returning the prioriity of governing this country to that of the needs and rights of its people, then the Greens and a bit of NZ First are our only hope, but what an odd couple that would be. But anyway hopefully Labour has pulled back the curtains and surely the UK election has provided some illumination, insight & initiative.

So what happens to the trusts that don't reregister? What will this mean for our economy?

It really gets tiresome having such dishonest and morally corrupt folk in high power in NZ. What a terrible legacy they leave for the next generations.

Plus Serious Fraud Squad should go to Spec Savers. ....please.

Cos Banks will launder and print anything for a cut of the action. So do Casinos...

(All they care about at Airports is a measly 10-20 grand, not the grandstand plays of the high and mighty rollers).

Not that it will change much....The Jury is out in many Countries....still arguing ...the Toss.?

This whole foreign trust issue is just headline material.
The Banks have the where with all, the info. Source of funds etc.
But they can't be bothered. Unless they are really asked.
Because they make too much money.

The link I posted above to my article on foreign trusts and the likely efficacy of the new rules goes to an error page. Here's hoping this works:
http://www.noted.co.nz/money/economy/new-zealand-the-little-tax-haven-th...

Is anybody else left a bit uncomfortable by the Greens' apparent assumption that if you want to keep something private, that's evidence that you are a crook with something nefarious to hide?

I believe it was our Lord and Saviour John Key who once said "If you've got nothing to hide you've got nothing to fear". Of course, he meant it about private communications between adults - he never seemed to see any appeal in having the same level of transparency around finances, trusts and the like.

Ms de Meanour, the govt wouldn't accept Labour's suggestion of a public register but reluctantly agreed that trusts should be registered with the IRD, and disclose beneficiaries etc to it. The police and Internal Affairs can also be informed of the details. So the information is still private and exempt from public scrutiny. That doesn't make me uncomfortable for a moment. And the fact so many trusts probably won't register by the end of the month probably does mean they do have something nefarious to hide.