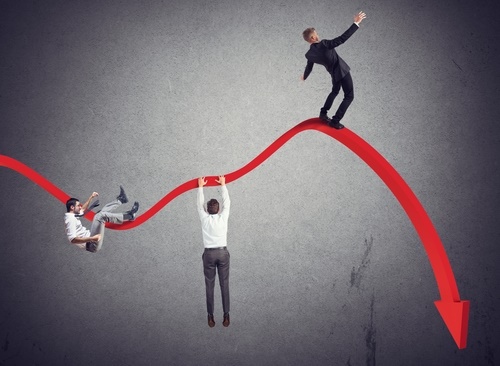 After showing signs of stirring, inflation has again proved evasive, dropping to just 1.6% for the 2017 year, compared with market expectations of 1.9%.

As at the end of September, inflation had been running at 1.9%.

The much lower than expected figure for December may again raise the possibility that the Reserve Bank - contrary to market expectations - may come under pressure to actually drop official interest rates again.

The New Zealand dollar, which was riding high against a weak American dollar prior to announcement of the CPI figures, immediately slumped by nearly a cent to US73.4c - reflecting a realisation in the marketplace that there will be no interest rate rises here in the foreseeable future, and there could even be falls. ANZ economists moved back the timing of the first interest rate rises to mid-2019 from late 2018.

ASB senior economist Jane Turner said the weak inflation result was largely driven by an unexpected fall in tradable inflation, despite a 6.1% lift in petrol prices over the quarter. Core measures of inflation reinforced that underlying inflation pressures are weak, she said.

"This release suggests that inflation has yet to stage a convincing comeback in NZ, outside of the housing sector.

"...And, with this release raising numerous questions about the strength of inflation moving forward (especially when considering the stronger-than-thought economic backdrop of recent years) it reinforces that there is no need for the RBNZ to raise interest rates anytime soon.

"We will revisit our CPI forecasts in the wake of this release and what it means for our RBNZ call. But for now, it seems appropriate that the RBNZ to leave to OCR on hold over 2018."

ANZ senior economist Phil Borkin said at this stage the ANZ economics team retained a view that domestic inflation will rise and broaden in time, largely predicated on their belief that through the combination of skill shortages and government policy changes, wage inflation will continue to lift.

"However, we acknowledge that it is far from a clear picture. Other policies (such as the free first year of tertiary education) will have a mechanical offsetting impact. And together with recent movements in oil and the NZD (until today!), the impact of structural deflationary forces, and the fact we see growth over the coming 12 months or so only at trend, and not above, it remains a murky picture.

"In this environment the RBNZ will remain cautious. Accordingly, we have pushed out our expectation for the first [Official Cash Rate] hike to mid-2019 (from November this year), though one could certainly make a case for having a flat-lined profile altogether until the balance of risks becomes clearer."

Here is the Stats NZ release:

The relatively flat result this quarter leaves the consumers price index (CPI) inflation rate at 1.6% for the December 2017 year. Inflation was 1.9% for the September 2017 year.

Inflation is a key measure for the Reserve Bank in setting interest rates and is commonly used in adjusting pay rates and other contracts.

There was regional variation in petrol price movements in the December quarter, with Auckland prices up 5.8%, while Wellington and Canterbury prices rose by more, up 7.1% and 6.8%, respectively.

Housing and household-related prices were a large contributor to inflation in the December 2017 quarter, influenced by higher prices for construction and rent.

Rent prices rose 0.5% in the December 2017 quarter, with increases in most regions countered by flat prices in Canterbury. In the year to December 2017, rental prices increased 2.3% across New Zealand, led by a 3.6% increase in Wellington.

"For most longer-term renters, prices tend to stay about the same from year to year, while rents may rise more as tenancies change hands," Mr Attewell said. "Around 40% of properties surveyed showed no price change over the year."

Food prices fell 1.7% in the December 2017 quarter (up 0.2% after seasonal adjustment), influenced by seasonally lower vegetable prices (down 19%). Prices fell for tomatoes, lettuce, and other salad foods.

"Retail prices fell by more than usual in the December 2017 quarter, contributing to lower inflation than widely expected," Attewell said. "Changing retail pricing strategies have led to lower prices for a range of household items, while specials drove new car prices down 6.2%."

The relative importance of items has changed in the December 2017 quarter as a result of the 2017 CPI review.

I just got 3.5% for a one year TD from BNZ. I prefer to remain liquid, but I cant keep funds on call at 2.2% for ever, waiting for a housing apocalypse.

Thanks for mentioning that Pragmatist. Do you any specific equities or trading platforms in mind?

Ex Expat, with Rabodirect I got 4.27% for 5 years and interest paid monthly. I reinvest the interest.

Why are you waiting for a housing apocalypse? Monetary policy tools are spent. Post any "apocalypse" I feel it's a very slow recovery prospect next time around. Hardly a playground for the grieving johnny come flipper who missed the recovery boat post GFC.

I actually want to invest in small PE deals, but am waiting for the opportunities afforded by a recession. Five years is far too long a horizon for me.

1.6% is pretty close to their 2% target. I don't think they should be dropping the OCR unless inflation trends down from here.

The much lower than expected figure for December may again raise the possibility that the Reserve Bank - contrary to market expectations - may come under pressure to actually drop official interest rates again. [emphasis added]

Surely not, without an official explanation why prior “stimulus” is not fit for purpose and hence failed to prompt CPI inflation to reach the goals that were purportedly promised.

There has been inflation just not at the desired level, hence further OCR cut is possible.

Nobody really believes the old "OCR does not affect CPI" argument. If that is the case why not simply cut the OCR to 0%?... or crank it up to 100%?.... I bet you will see things happen rather quickly then.

The power the Reserve Bank used to have came from some amount of unpredictability. If they randomly moved the OCR between 0% and 100% the market would take notice, and any predictions would be worthless.

What you need to consider is that behind the curtain the Reserve Bank (like every other Central Bank) is seriously scared that they will trigger a collapse. They are moving cautiously, slowly and observing effects.

When they last pushed actual mortgage rates into the 10% region people were under a lot of financial pressure and I saw a lot of businesses fold. It should be done again to clear out the housing bubble and bring house prices down.

Nobody really believes the old "OCR does not affect CPI" argument.

Citigroup Chief Executive Officer Michael Corbat fears the violence of the next inevitable downturn... and worries about the ignorance of surging debt costs...
https://www.zerohedge.com/news/2018-01-24/davos-participant-unveils-what...

We need to get Roger to predict something that we can bet against ;)

Just listen to Yazz and the Plastic Population's song for Roger's prediction.... "the only way is up"!!!!

Canada and US both increased interest rates, despite their inflation being below target..

He is right about it not lasting, I paid someone to vacuum my floor and it's mucky again already.

This is the new normal

And contrary to many predictions about rising interest rates , this does not look like it set to happen anytime soon

The inflation producing policies of the lgnzf govt will work their magic. Make houses seem cheap and affordable through much higher wages across the economy. Three years to pull it off

Yes and it will snow in NZ tomorrow

Agree with you, Boatman.

Interest rates are set to remain at the current low level (or go even lower) in the foreseeable future.

That might well give a boost to the housing market through 2018.

Ultimately, shouldn't this causation be a contradiction?

"The time is out of joint. O cursèd spite,. That ever I was born to set it right!"

Well, to be honest, no matter my best intentions – I simply can’t set it right.

But this seems horribly out of kilter to me.

"In this environment the RBNZ will remain cautious. Accordingly, we have pushed out our expectation for the first [Official Cash Rate] hike to mid-2019 (from November this year), though one could certainly make a case for having a flat-lined profile altogether until the balance of risks becomes clearer."

Why don't these economists just stop forecasting altogether; or at least give a broader view. They haven't got it right for about 10 years.

The answer to your question is: because it's their job, and they like to have a job, but yes I agree with you, you dog has about the same odds of getting it right

David, how much of this inflation is from the non -tradable sector?