Rodney Dickens identifies the structural shift the RBNZ made during the GFC that means the effective OCR is much higher than the actual OCR, explaining why our retail interest rates are at current levels

Rodney Dickens identifies the structural shift the RBNZ made during the GFC that means the effective OCR is much higher than the actual OCR, explaining why our retail interest rates are at current levels 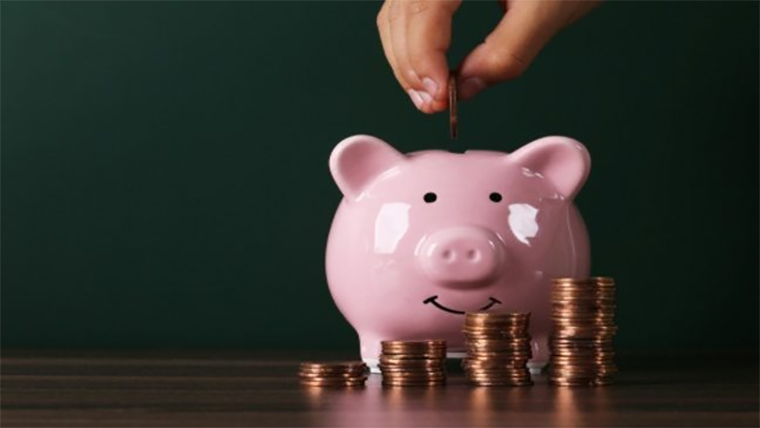 Since the GFC, the RBNZ has forced banks to borrow more locally

With the OCR at 1% and falling vs. the US Fed Funds Rate at 1.85% and falling you may wonder which country had a crisis.

NZ faces challenges but unlike the US it isn't a crisis country. A structural change in the NZ market caused by the Reserve Bank that didn't occur in the US means the OCR is effectively around 3.5% on a comparable basis with the pre-crisis level. That is less dramatic or alarming than the headline figure of 1% and falling.

The Reserve Bank's response to the financial crisis caused a structural increase in the interest rates borrowers and depositors faced relative to the OCR. As a result the effective level of the OCR is much higher than the actual level, while it could be argued that borrowers are subsidising retail depositors; at least relative to the pre-crisis situation.

I don't know where to start in terms of assessing the merits of the Reserve Bank swaying the scales in favour of retail depositors over borrowers. I will leave that for others to debate. However, it is useful to calculate the effective OCR faced by borrowers and depositors as a result of the structural change.

After adjusting for the structure change the OCR is effectively around 3.5% based on the rates faced by mortgage borrowers and offered to retail depositors. It is this rate that should be compared with the pre-crisis level of the OCR and the Fed Funds Rate. 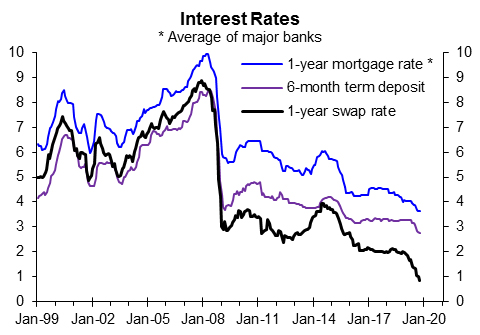 These relativities changed significantly after the financial crisis mainly because the Reserve Bank forced banks to borrow more from retail depositors and less from overseas. As a result the average six-month term deposit rate is now 1.9% above the one-year swap rate, and the average one-year fixed mortgage rate is 2.8% above the swap rate.

The gap between the one-year fixed mortgage rate and the six-month term deposit rate has narrowed this year, but has generally remained the same as was the case prior to the financial crisis. The effect of the structural change is depositors receiving higher interest rates relative to swap rates and the OCR than was the case pre-crisis and borrowers paying higher rates. There is a similar larger gap between all fixed mortgage rates and the respective swap rates (next chart); while the swap rates are behaving similarly relative to the OCR as was the case before the crisis (top right chart). 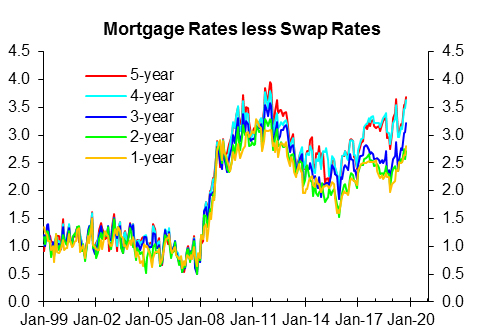 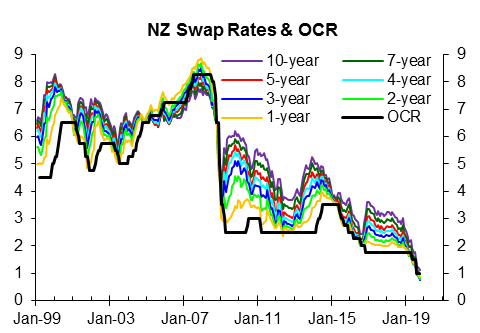 The borrowers that have most cause for complaint are SMEs borrowing via bank overdrafts. Based on Reserve Bank data the average SME overdraft rate largely moves up and down with the OCR (see the next chart). From 1999 to 2007 the gap between the SME overdraft rate and the OCR averaged 3.47%, while it is 8% now. If the pre-crisis relativity still existed the SME overdraft rate would be 4.47% now rather than 9% (ceteris parabis). Unfortunately, data aren't available on the rates SMEs are charged by banks in general. 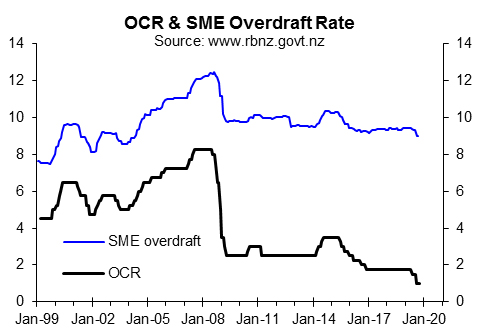 The effective level of the OCR is hugely higher than the actual OCR, but it varies depending on whose perspective is taken

It is illuminating to calculate the effective OCR faced by borrowers and depositors as a result of the structural change in the money market.

The chart below shows effective OCRs borrowers and depositors have faced for 1-year and 5-year fixed mortgage rates, 6-month term deposit rates and the SME overdraft rate since the financial crisis. For example, just before the crisis the overdraft rate was 4% above the OCR, if that gap still existed the OCR would have to be 5% to generate the current 9% overdraft rate not 1%. For businesses borrowing via bank overdrafts the effective OCR is 5% now on a pre-crisis comparable basis. When calculated in the same way the mortgage rates and term deposit rate generate effective OCRs around 3.5% now. 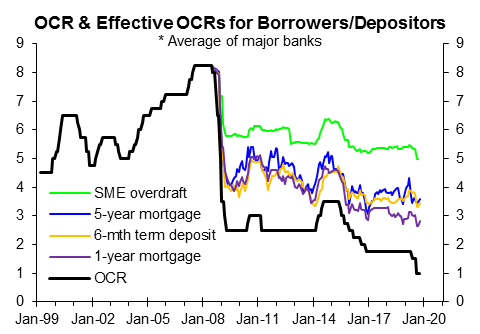 There hasn't been a similar structural change in the US from what I can see. The relationship between mortgage rates and wholesale rates remains the same based on benchmark 30-year rates (see the chart below). The 30-year mortgage rate still largely moves up and down with the 30-year bond yield with no clear change in the gap. The gap averaged 1.56% between 1999 and 2007 versus 1.6% now. 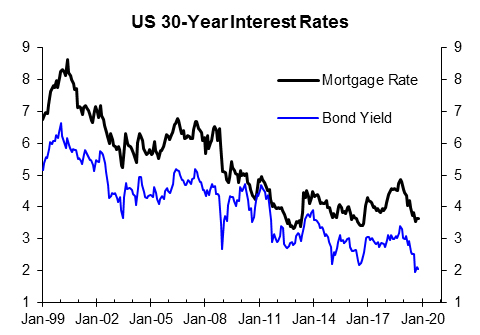 If you think about the 1% OCR in NZ vs. the 1.85% Fed Funds Rate in the US you may start to wonder which of the two countries had a crisis. However, with the effective OCR in NZ at around 3.5% based on what most mortgage borrowers and depositors are facing (and much higher for SMEs borrowing on overdraft) the situation makes more sense.

NZ faces challenges but unlike the US it isn't a crisis country. People shouldn't compare the current level of the OCR to the level that existed before the crisis or to the current level of the Fed Funds Rate. Such comparisons are highly misleading because of the structural change initiated by the Reserve Bank; they give an overly pessimistic impression of the state of the NZ economy. If such comparisons are made they should use estimates of the effective OCR not the actual OCR.

Our just launched new website has an introductory video that presents the five reasons we can help clients make more profitable decisions and offers free introductory reports for our three main monthly reports (T&Cs apply). As part of the launch of the new website we are also offering 25% discounts on the sharply-priced annual subscriptions for new clients of these reports. Visit www.sra.co.nz if you want to check out these offers.

This article is re-posted here with permission.

You lost me with your very second sentence:

What crisis are we talking about? It seems to have flown over my head.

He could possibly be referring to the USA debt/GDP debt spiral. It's not so dramatic to be a crisis though?

A trillion dollar deficits, sovereign debt that is 80% of GDP, and an economy that is heading into recession. Sounds like a crisis.

Sounds like a crisis brewing, but semantics i guess.

Fascinating. Thanks Rodney. It seems the core funding ratio was highly successful in making NZ more resilient to external shocks, since it means the NZ banks mainly borrow from NZ depositors; rather than on 90 day rollover in the wholesale markets in London (like Northern Rock found, this works fine and then doesn't).

Two questions arise. First, why doesn't the RBNZ do more of what works, eg extending the timeframe for the core funding ratio from 1 year to 2 years? Secondly, is the SME rate now more appropriate considering the risk, or are we strangling our SME business sector to death?

But ask yourself, Rodney, "Why did the RBNZ have to make the Structural Change that you rely on for your thesis in the first place"
By requiring 'our' banks to hold more on-shore capital, and rely less on foreign sources, aren't we admitting that in times of crisis we might be locked out of the funding required to run the country? Yes, would be my answer - hence the drive to keep our 'savings' onshore. So it isn't a matter of "the effective OCR is 3.5%", the fact is it is 1% because I disagree with your second suggestion that "(NZ) unlike the US it isn't a crisis country"; NZ is ( and I'm not even sure the USA really is!)! And if we don't acknowledge that, then an OCR of 1% is going to look expensive on any scale you might want to imagine.

(I'm not even sure the USA really is!)
The following link may confirm a cohort of US society is in crisis : US Wage Levels Have Not Kept Pace With Economic Growth

Interesting article, perhaps a case of some deaft slight of hand by the RBNZ?

Lower OCR takes pressure off the dollar and allows it to fall which maintains competitiveness of our exporters while not further overheating our local housing markets and increases our resilience in the next credit crunch?

Let's also remember what the OCR actually is for; it is 'effective' at the rate that is set...today that is 1%

"Registered banks hold settlement accounts at the Reserve Bank, which are used to settle obligations with each other at the end of the day. The RBNZ pays interest on settlement account balances, and charges interest on overnight borrowing, at rates related to the OCR. The most crucial part of the system is the fact that the Reserve Bank sets no limit on the amount of cash it will borrow or lend at rates related to the OCR."

" Equally, borrowers won't be [dis]pleased to hear they [are] subsidise retail depositors; at least relative to the situation that existed pre-crisis."

Are the parts in the square brackets above supposed to be there?

Well there you are. We're better off than we thought right?

Interesting but are we forgetting fractional reserves? Banks fairly much make loans from thin air... No need to have too much correlation between loan and deposit interest rates. Banks really only want enough deposits to cover what the Reserve Bank demands...