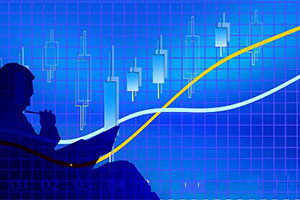 Governor Wheeler has spent almost the last two years trying to talk the exchange rate down.

His comments and actions may have played a part in it falling for a period.

However, since September last year the exchange rate has appreciated 12% contrary to the governor's continued calls for it to fall more in response to the falls in export prices and especially dairy farm incomes; despite him backing up his calls with OCR cuts.

History is full of examples of the forex market, for all its shortcomings, being smarter than Reserve Bank governors and I don't expect things to be different this time around as discussed in this Raving.

The forex market versus Governor Wheeler

The following are selected statements by Governor Wheeler since September 2014:

September 2014
"The exchange rate has yet to adjust materially to the lower commodity prices. Its current level remains unjustified and unsustainable. We expect a further significant depreciation, which should be reinforced as monetary policy in the US begins to normalise."
Source: http://rbnz.govt.nz/monetary-policy/monetary-policy-statement/mps2014-09

December 2014
The exchange rate does not reflect the decline in export prices this year and remains unjustifiably and unsustainably high. We expect to see a further significant depreciation."
Source: http://rbnz.govt.nz/monetary-policy/monetary-policy-statement/mps2014-12

June 2015
"With the fall in commodity prices and the expected weakening in demand, the exchange rate has declined from its recent peak in April but remains overvalued. A further significant downward adjustment is justified."
Source: http://rbnz.govt.nz/monetary-policy/monetary-policy-statement/mps2015-06

December 2015
"The New Zealand dollar has risen since August, partly reversing the depreciation that occurred from April. The rise in the exchange rate is unhelpful and further depreciation would be appropriate in order to support sustainable growth."
Source: http://rbnz.govt.nz/monetary-policy/monetary-policy-statement/mps-december-2015

The governor initially got his wish, with the exchange rate falling 18% from the peak in July 2014 to the trough in September 2015 based on the value of the NZD against the currencies of NZ's major trading partners as measured by the TWI (left chart below). Potentially reflecting the fall in the exchange rate, the governor's calls for a lower exchange rate have been toned down somewhat since late-2014, but he continues to sing to the same tune (i.e. the exchange rate should be lower given the fall in export prices). Despite this, the NZD TWI, that is highly correlated with the NZD/USD (right chart), has appreciated 12% since the trough in September 2015 reversing over half of the earlier fall. 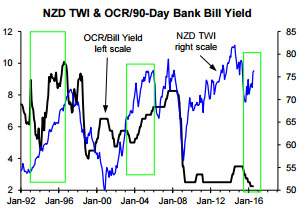 Contrary to what the governor expected and may have been expected by many, the exchange rate has appreciated rather than fallen in the wake of the five OCR cuts Governor Wheeler has delivered since July last year (see the right hand boxed area in the adjacent chart). The historical experience shows that such a response to OCR cuts isn’t unusual (see the other two boxed areas in the chart). The OCR only came into existence in March 1999, prior to which the 90-day bank bill yield was the key interest rate the Reserve Bank targeted so it is used in the chart to back-date the OCR prior to March 1999.

As I have pointed out in our monthly economic and other pay-to-view reports, I see strong parallels between what is happening now and the experience in the mid-2000s when the three OCR cuts delivered by Governor Bollard in 2003 were followed by a higher exchange rate and, in time, higher interest rates (see the middle boxed area in the chart above). But in terms of the governor cutting the OCR partly motivated by a desire to see a lower exchange rate there are parallels with the experience in the 1990s when Governor Brash pushed down the 90-day bank bill yield aggressively in 1993 largely in response to concern about the appreciating exchange rate just to see the exchange rate head much higher while in 1994 the 90-day bank bill yield more than reversed the fall in 1993 and remained high over most of the next three years (see the left boxed area in the chart above).

The Brexit vote has had a minor impact on the exchange rate recently but it appears to be a sideshow. The main story is the contribution of the five OCR cuts to stronger economic growth and the forex market responding to stronger economic growth (e.g. 3.5% annualised growth in H2 2015) by pushing the NZD up. The left chart below shows a moderate rather than high correlation between GDP growth and the annual % change in the exchange rate, but my focus is most on the experiences in the mid-2000s following the three OCR cuts Governor Bollard delivered in 2003 and in the mid-1990s following the large fall in the 90-day bank bill yield in 1993 (i.e. the two boxed areas on the left chart below). It is no coincidence that the latest appreciation in the NZD TWI (i.e. in the NZD against the currencies of NZ's main trading partners) is corresponding with a hint of stronger annual GDP growth.

It will take a year for the full stimulus from the five OCR cuts to impact, with falling interest rates and 2%+ population growth being much stronger drivers of GDP growth than the exchange rate and export prices, although recent moderate upside in export prices will be a minor positive (right chart below). In my assessment the parallels with the experiences last decade and the decade before will continue. My assessment is based on analysis of the historical experience, as presented in brief here. It is also based on quality analysis of the link between the exchange rate and the economic fundamentals that has revealed which fundamentals really matter and provides a much better basis for assessing exchange rate prospects than offered by the forecasting frameworks used by the Reserve Bank and bank economists.

NZ economic growth is only one of the major drivers of cycles in the exchange rate. This is reflected in the correlation being only moderate rather than high in the left chart above. I combine the most important economic fundamentals to the NZD/USD in the SRA NZD/USD Driver Index that has a high 0.91 correlation with the NZD/USD (left chart below), while I do the same for the NZD/AUD in the right chart below that shows a 0.86 correlation out of a maximum possible of 1.0 between the NZD/AUD and the NZD/AUD SRA Driver Index. The SRA Driver Indices aren't perfect but they have performed dramatically better than the likes of the Reserve Bank or bank economists in explaining what drives the cycles in the exchange rate (i.e. what economic fundamentals really matter to the forex market).

The SRA Indices show that the economic fundamentals more often than not play a major part in driving the cycles in the NZD/USD and NZD/AUD. This is not so much the case for the NZD/JPY, NZD/EUR and NZD/GBP.

A critical insight from the two charts above is that the forex market largely responds to economic news, it doesn't see into the future to any great extent. This is reflected in the respective exchange rates largely moving up and down in synchrony with the SRA Indices.

The reason the forex market is much smarter than the Reserve Bank is because it is much quicker at responding to the economic news than the Reserve Bank. The appreciation in the NZD since September 2015 is because the forex market has been quicker to realise than Governor Wheeler and his forecasters that NZ economic growth is improving, which is what I have been advising clients would be the case in our monthly economic and forex reports. Analysing the outlook for the exchange rate isn't fool proof in part because the forex market can be fickle at times, which is one reason I don't get it right all the time, but if you want the best available assessment of the outlook for the key economic fundamentals of relevance to the especially the NZD/USD and NZD/AUD and what it is likely to mean for the outlook of these exchange rate you shouldn't be without our monthly Forex Prospects reports.

Really? I would've thought the biggest contributor to our exchange rate is our OCR being what it is and the carry trade riding the easy returns on low cost over seas borrowing. If our OCR was that same as the US or the UK carry trade would dry up and with it our current TWI and USD exchange rate which seems to be the benchmark.

Yes, I'm with you that the carry trader is the biggest driver of NZD. The currency has fallen steadily against the yen but been more resilient against USD and TWI. I think that's a whole different story though and I'm not sure what the source currencies for the carry trade are (some time back yen was a standard). And realistically, countries with housing bubbles like NZ tend to generate "good" economic news typically because consumer spending is high.

What is "good" economic news though?

Everybody chalking up 163 % of disposable income on credit cards? I actually think that is negative news, but its always interpreted by the markets as positive.

ie: look, they all spent 300% more than they actually have. Lets bid the dollar up because their economy must be strong.

No, not a strong economy, just stupid citizens.

Well the govt and media don't want to frame consumer spending and debt like that. Consumer spending is "good news". It's the backbone of the economy. Asset price appreciation is simply the "engine room."

Wheeler has become nothing more than a commentator on the economy. He doesn't seem able to influence it these days, unless its in the wrong direction.

Remove Governor Wheeler from the RBNZ

What a load of absolute tripe! Can you stick to having qualified commentators rather than someone intent of flogging off their product!

I don't agree with Rodney, but he's a helluva lot smarter and experienced than I will ever be. I don't mind reading commentary that challenges me, even if someone makes their livelihood from it.

"A critical insight from the two charts above is that the forex market largely responds to economic news, it doesn't see into the future to any great extent. "

Yip - thats why NZ is in the crap - we have a PM with these exact qualifications.

So we still have one of the easiest routes to park dirty money and no restrictions on parking it in property.
What does the RBNZ expect?

Read on the net long back...Forex dealers act as cartel, Central Banks don't. Is that right ?