David Chaston explains why both borrowers and savers should be keeping a close eye on wholesale interest rate benchmarks. He suspects a turning point is upon us

David Chaston explains why both borrowers and savers should be keeping a close eye on wholesale interest rate benchmarks. He suspects a turning point is upon us

The rise and rise of long term benchmark interest rates in the past few days should have local borrowers - and savers - keeping an eye on them.

However, over a much longer timeframe we have seen compression of the differential between the two benchmarks.

The rises in the past few days are not large in the perspective of the past year or longer. But after a longish period of stability at low levels, the risk is that we are at a turning point.

A fundamental turn higher will affect many groups.

Other asset investors (read real estate, especially commercial real estate) face painful reductions in property valuations if yield rises are sustained. The impact may flow through to these asset classes slowly, but there will be no avoiding them.

Monetary authorities worldwide seem to have had a group rethink about the benefits and efficacy of low rates; these policy makers are finding low interest rate strategies hard to justify.

Universally, they are concerned about the consequential run-up in asset prices. Led by the Fed, and encouraged by the Bank of Japan, higher long term rates are on their way, and the pain that will cause some investors will be seen as a necessary adjustment in the drive to get the cost of money back to more normal levels.

Just how far this process has weighted on New Zealand wholesale rates can be seen in this chart: 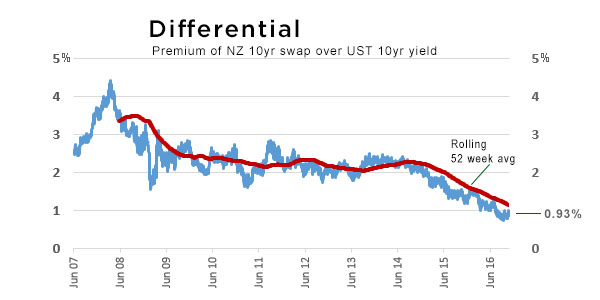 The RBNZ has clearly signalled that it will cut rates on November 10, maybe for the last time in this credit cycle. That signal is a sop to local commodity producers to try and hold the NZ dollar from appreciating. But since the last no-change review on September 22, the Trade Weighted Index (TWI) five has actually retreated slightly from 76.4 to 75.5, and the NZ dollar has fallen from US73.4 cents to US71.1c.

The price of money is too low

In their first opportunity after the US presidential election, the Fed will almost certainly raise its policy rate by another 25 bps, and markets have priced almost all this change in now. They are starting to price in the subsequent 2017 changes.

So why the RBNZ needs to cut baffles me, especially as it will just pump up house prices. The price of money is too low in New Zealand now and making it lower embellishes the bad behaviour of investors. New Zealand investors react in the same way investors do in any other market when money is cheap. We only have a NZ$1 trillion housing market because of this distortion.

For most of the post-Global Financial Crisis (GFC) period, the differential between benchmark US and NZ 10yr yields has been 2.25%. Prior to the GFC, the differential was about 2.5%. The slip to under 1.0% is unusual and I think it will revert higher, just at the time the US starts getting serious about raising rates. Which means local borrowers may have two factors weighing against them.

And then, factor in the tighter loan-to-value ratio (LVR) rules, plus the coming debt-to-income ratio rules driven by the RBNZ. Plus the Australian Prudential Regulation Authority rules imposed on Aussie banks to test affordability at a 7% interest rate (which the RBNZ seems happy to allow to apply in New Zealand). Then there is a substantial level of wholesale weight pushing on both mortgage demand and interest rates.

It seems unlikely there will be other countervailing factors that can keep our rates artificially low for much longer. Banks say they are already feeling the margin pressure. Their first reaction will be to test borrowers with rising rate offers. If their rivals follow, there will be no place for borrowers to hide. 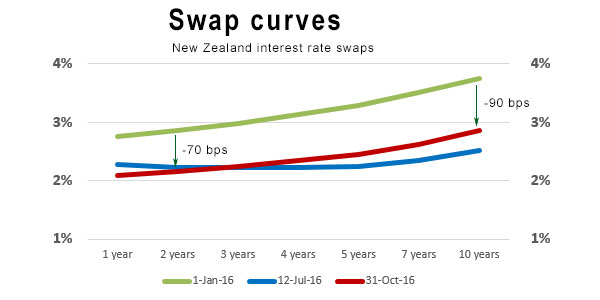 It seems unlikely there will be other countervailing factors that can keep our rates artificially low for much longer.

Federal Reserve Vice Chairman Stanley Fischer in a speech on October 17 caught up part way with the yield curve:

"First, and most worrying, is the possibility that low long-term interest rates are a signal that the economy's long-run growth prospects are dim...One theme that will emerge is that depressed long-term growth prospects put sustained downward pressure on interest rates. To the extent that low long-term interest rates tell us that the outlook for economic growth is poor, all of us should be very concerned, for-as we all know-economic growth lies at the heart of our nation's, and the world's, future prosperity."

In other words, the collapsed yield curve of low nominal rates very likely means expectations for a very bleak future landscape; but like overvalued stocks, it isn't immediately clear what that actually means about how we get there. It could very well be a violent and unstable period where the global economy contracts and grows by turn, with each offsetting over time the other, though I doubt it. No, I think the pattern is quite well-established, proved in the uncertainties of 2013.

Unlike Stanley Fischer's fit of reality, some central bankers actually believe that their QE's have been "too successful" and that is to blame for the flat yield curve. As I wrote above, there are those who refuse to believe that markets are anything other than a tool or toy for monetary policies. You can already see plainly the illogic of it, or where it devolves into circular logic. QE has, in this view, been so successful with rate "stimulus" that it needs to be pulled back so that it can actually be successful in the real economy. This is a partial offshoot of another idea being debated in policy circles where a central bank needs to raise its inflation target.

In other words, these people truly believe that buying bonds has worked so well it has actually undermined itself, especially at the long end. In reality, even if it were true it only proves the complexities of markets and how they operate in other dimensions central bankers and economists don't appear to be able to perceive until far too late. I wrote in mid-August about the sudden infatuation with higher inflation targets, particularly for Japan:

"In the meantime, the Japanese economy, like the global economy, suffers from economy while economists search the skies for answers to the magic number problem they created. It is entirely logical and reasonable that people would become so highly skeptical of these Rube Goldberg-type plans, especially when every time "stimulus" "needs" to be increased it is itself an acknowledgement that past "stimulus" failed to actually stimulate." Read more

I believe RBN is aware of everything in the article and discussed in the comments. The only reason to drop the OCR is to prop up Auckland housing in the run up to the election. They're trying not to rock the boat. The cut will not affect consumer spending in a way that will produce the inflation target.

Banks have also adjusted their rates so that the interest rate you will get with the OCR at 1.75% will be exactly the same as when it was 2.25% earlier this year. The bank cost of finance is already covered, it's all about margin.

I highly recommend this video.
Highlights the importance of the yield curve, ( USA yield curve,...and the $US is the global reserve currency ), in helping discern when a downturn might happen..
Its a great video... also touches on potential QE4/ helicopter money.
Kinda confirms my view that we are past halfway in the current business cycle..
http://www.otterwoodcapital.com/blog/how-much-time-do-we-have-before-the...

Here is a video explaining WHY the yield curve is important... simple and good.. by the lovely Christine Hughes

Where would the money go if it's driven out of stock, bonds and real estate David. Is it possible some of those trillions will go into the tiny gold and silver markets and what would that mean for price? Is it possible that the bear market since 2011 has turned into a raging bull as it did in 1976- 1980 after it's then 50% correction. I wonder!

Actually, I think that if the price of money rises, it will draw in more investors. Some will lose from their current low-yield portfolios (but not as low yield as gold), but more will move toward the improved yields. Assets prices will fall (including for precious metals) as returns required by investors rise.

The main benefit from all this is that the hurdle rate will rise. Investors won't be attracted to low or no returning assets. Projects that can't meet higher return requirements just won't get done. This will have a particular impact on public projects that rely on cheap money.

And it will have pointed impacts on asset prices.

"So why the RBNZ needs to cut baffles me, especially as it will just pump up house prices. The price of money is too low in New Zealand now and making it lower embellishes the bad behaviour of investors. "

Your'e not alone, but is it really 'baffling'? It's pretty blatantly obvious and has been for quite some years what many CB's are trying to protect at the detriment of everything else. Add to that the real global 'currency wars' which started with the US alone recklessly adopting the failed concept of QE.
I still don't believe the RBNZ has learnt the lesson yet. Maybe the US FED and Yellen are starting to get it but here? nah.

You're right in respect to those that have been found disenfranchised from owning a home who now require what used to be considered a large deposit, abd of course those living off the interest from there savings and things like pensions. When a $100 thou deposit doesn't even get you $3000 after RWT to either live off or compound against rising house prices of 15-25% pa.....eventually they find themselves going backwards fast

Lower interest rates has different effects depending on what the economic climate is that people have been thru. ... ie.. to do with "psychology" .......... In my view.

In NZ ... lower and lower interest rates simply fuels the Real Estate mkt.. ie. We are on a borrowing spree. We are even at the point where people are withdrawing savings ... ( and probably investing those savings in Real Estate ).

In Japan people are buying home safes ...and hoarding cash.
In Europe... they might be saving more because they need more for retirement....etc..

But u are right.... I dont think Central banks contemplated that lower interest rates might have the effect of people saving more..!!

Watch out for another global financial upheaval in 2017. This time Australia is not in a great position to weather the storm and the fall out could be worse for New Zealand as well. Increased war activities in the Middle East is another threat that will twist the blade in deeper. It will be an interesting contest between the Politicians and the Central Banks. Both may not have the same constituency to take care of or mandate to execute.

If the tide is indeed turning , then its not a moment too soon