Rodney Dickens suggests how you should assess the numerous surveys and market indicators published about the economy, and how to draw conclusions from them

Rodney Dickens suggests how you should assess the numerous surveys and market indicators published about the economy, and how to draw conclusions from them 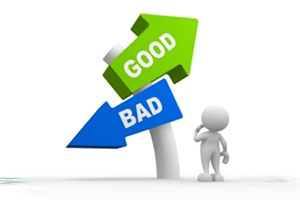 One of the useful things the bank economists do is report a range of indicators including business surveys, consumer surveys, labour market-related indicators, commodity prices etc.

However, in the same way they have a track record of providing dubious economic forecasts they too often don't put the insights provided by the indicators they report in context.

Some of the indicators provide useful insights but some have poor, variable or little link with the things they are supposed to provide insights for. This Raving reviews the leading indicators of GDP growth, retail consumer spending and employment growth released by the bank economists but also looks at a couple of non-bank surveys.

The ANZ monthly business survey has been around for more than 25 years and gets plenty of media coverage. In commenting on it the ANZ economists don't point out enough that it can be subject to major political or other biases to the extent at times that it significantly undermines the usefulness of some of the key components of the survey as leading indicators. They have pointed out that the own activity survey is a more useful indicator than the business confidence survey but even it has been subject to sufficient bias at times to significantly undermine its usefulness as a leading indicator of economic growth.

Both the ANZ surveys significantly understated near-term GDP growth prospects for most of the period during which Labour was in power only to rebound strongly and overstate near-term growth prospects following National coming to power. However, this changed early last year when Governor Wheeler indicated he was looking for evidence the fall in dairy farm incomes was having a significant negative impact on economic growth and it seems a number of the respondents of the ANZ survey gave him the evidence he was after by somewhat mischievously ticking the negative boxes in the survey. From early last year both ANZ surveys started to significantly understate near-term economic growth prospects. The extent of this downward bias has reduced but there could still be an element of bias as a result of a small group of respondents still trying to use the survey to manipulate interest rates. If the ANZ economists were adding real value they would be pointing these sorts of issues out themselves. 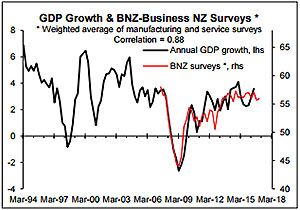 The two ANZ surveys may now be back to being reasonably useful leading indicators of economic growth but with them having been so dramatically tainted by political and other biases since 2002 I am wary of interpreting them at face value which in itself significantly undermines their usefulness.

The BNZ-Business NZ manufacturing and service sector surveys haven't been around as long as the ANZ survey but are showing signs of being reasonably useful leading indicators of GDP growth and don't appear to be subject to the political and other biases exhibited by the ANZ surveys. The peak correlation is 0.88 between GDP growth and the weighted average of the two BNZ-Business NZ surveys (left chart above) which is very high but the chart has shown two periods when the survey has been quite a bit off the mark while the peak correlation is coincidental rather than with the weighted average survey leading GDP growth. The best all-round performance as a leading indicator of GDP growth goes to the NZIER experienced own activity survey rather than to any of the bank surveys (adjacent chart) although at times this survey can be moderately off the mark. Part of the problem is the at times random behaviour of reported GDP growth as a result of sampling errors (i.e. at times some of the surveys may be more useful than the official data). 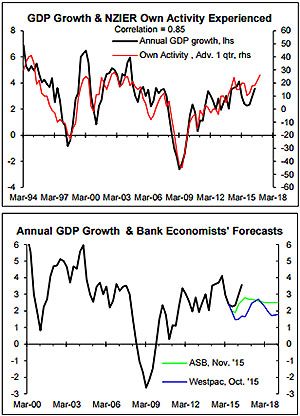 Following the collapse of the ANZ business surveys in mid-2015 the bank economists seemed to put too much weight on them predicting a worse slowdown in economic growth than occurred and much less recovery than has occurred (adjacent chart for the late-2015 predictions for GDP growth by the ASB and Westpac economists). If the bank economists had distinguished between the much less useful ANZ business surveys and the more useful BNZBusiness NZ and NZIER surveys it may have stopped them focusing excessively on the negative impact of the fall in dairy farm incomes.

The consumer surveys may currently have a downward bias

Westpac in conjunction with McDermott Miller release quarterly consumer surveys while ANZ in conjunction with Roy Morgan release monthly surveys. The consumer confidence surveys released by the two groups behave reasonably similarly which makes me more confident in what they are saying (left chart) but the surveys of current or present consumer conditions can behave somewhat differently at times (right chart).

I find that a combination of the overall consumer confidence surveys and the current/present conditions surveys are the most useful leading indicators for annual growth in retail spending (left chart below) and overall consumer spending (right chart below) and in both cases the peak correlations are with the surveys advanced or leading by one quarter. The correlations are quite high but at times the surveys can be reasonably off the mark although part of the problem is random variation in the reported retail sales and consumer spending numbers as a result of sampling errors. Consumer spending excludes business-related retail sales and includes lots of non-retail spending by consumers

With the bank economists having not picked up on the downward bias in some of the business surveys since 2015 that appears to be a result of some business people using the surveys to encourage Governor Wheeler to cut interest rates more than was needed, it should be no surprise that the bank economists aren't pointing out what is possibly a current downward bias in the consumer surveys. The excessive focus by the bank economists, Reserve Bank and media on the negative impact of the fall in dairy farm incomes may have tainted the consumer surveys that this year have been understating near-term prospects for growth in retail and consumer spending. However, the recent gaps between growth in spending growth and what the surveys predicted aren't any greater than past gaps so the recent divergences may just reflect normal sampling errors in the surveys and/or the official numbers rather than necessarily reflecting them being tainted by the excessive focus on the fall in dairy farm incomes.

When commenting on the consumer surveys the bank economists need to acknowledge that at times the surveys can be off the mark as leading indicators of retail sales and consumer spending and they should consider whether there are any reasons for expecting bias (e.g. them being tainted by the excessive focus on the fall in dairy farm incomes).

Historically consumer surveys have been quite useful leading indicators of employment growth but at times they have been off the mark as was the case especially in 2009 and over the last year (left chart below). Some of the recent divergence between employment growth and what the consumer survey has been predicting is as a result of problems with the official employment numbers that are more subject to random variation or sampling errors than the retail/consumer and GDP numbers. In the 2016 June quarter Statistics NZ started including military personnel living off base for the first time with the historical numbers not including this group of previously overlooked employees which resulted in reported annual employment growth spiking to 6.1% in the September quarter which greatly overstates actual employment growth. However, the more useful leading indicators of employment growth suggest growth has been much stronger than predicted in the last year by the consumer surveys which adds to our suspicion they have been biased down by the excessive focus by the bank economists and media on the fall in dairy farm incomes compared to its relevance to prospects for economic and employment growth.

As should be the case, GDP growth is one of the reasonably useful leading indicators for employment growth and suggests employment growth should be running close to 3% (right chart above). Some of the recent major divergences between GDP growth and employment growth reflect sampling errors particularly in the official employment numbers but also to some extent in the GDP numbers. It is a shame when you have to make qualifications about the official numbers but at times this is necessary especially with the labour market numbers but unfortunately just as the bank economists don't qualify enough the insights provided by the leading indicators they report they don't qualify enough the insights provided by some of the official numbers.

For a while it looked like BNZ-Business NZ employment intentions surveys would be useful leading indicators for employment growth but this hasn't been the case in the last few years even allowing for the sampling errors in the official numbers (left chart below). This has been even more the case with the employment outlook survey by employment agency Manpower that has completely lost the plot in the last year (right chart below). I think the BNZ-Business NZ employment intentions surveys probably still warrant monitoring but I am highly dubious of the insights now being provided by the Manpower survey. The Manpower survey may come good again but once a survey has gone AWOL it is hard to be confident in it until it has been back on the job for a reasonably protracted period. 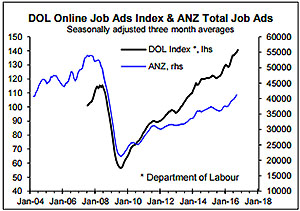 I take the job ads series reasonably seriously (adjacent chart). However, neither the link between annual employment growth and annual growth in DOL job ads (left chart below) nor the link between the level of employment and the level of the DOL job ads (right chart below) are particularly close. The correlation in levels is high at 0.87 versus the 0.57 correlation for annual percent changes but as the right chart below shows, employment and job ads don't move proportionately. Some qualifications aside, the surge in job ads fits with the other most useful leading indicators of employment. Even allowing for the major overstatement of employment growth by the official numbers recent, employment growth more than GDP growth has been stronger than the bank economists and Reserve Bank predicted, which reflects more than just them not doing enough to distinguish the useful from the useless leading indicators.