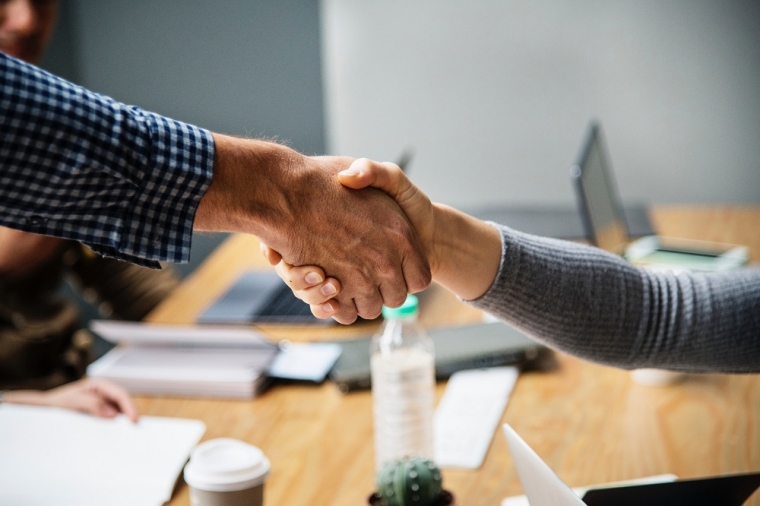 You always feel like you are being a bit of a fun-spoiler if you tackle someone about being over-ambitious.

So, I would have to say firstly, I think it's great the Government is tackling front-on the perceived problems over the conduct of our financial institutions.

My concern, based on what's in the Options Paper just released for consultation, is that the Government may be trying to tackle the problem the wrong way around.

The risk is that they may try to tell the financial institutions what to do rather than what NOT to do. That sentence probably needs a bit of explaining, which I shall attempt to to do, but, briefly, it can be far more complicated and prescriptive to regulate what businesses do, rather than simply tell them what they can't do.

I think the least complicated way of tackling the perceived conduct problems is to ban sales incentives and commissions within financial institutions and, providing some suitable consensus can be agreed, ban certain products.

In theory, if sales incentives are removed then so the incentive to push certain products that might not be suitable for the individual concerned is removed as well. Essentially you then have a level playing field in which the consumer is offered in an unfettered way a range of product options.

At this point, I think it is worth including from the options paper the part that deals with the Government's desired outcomes. So here they are: 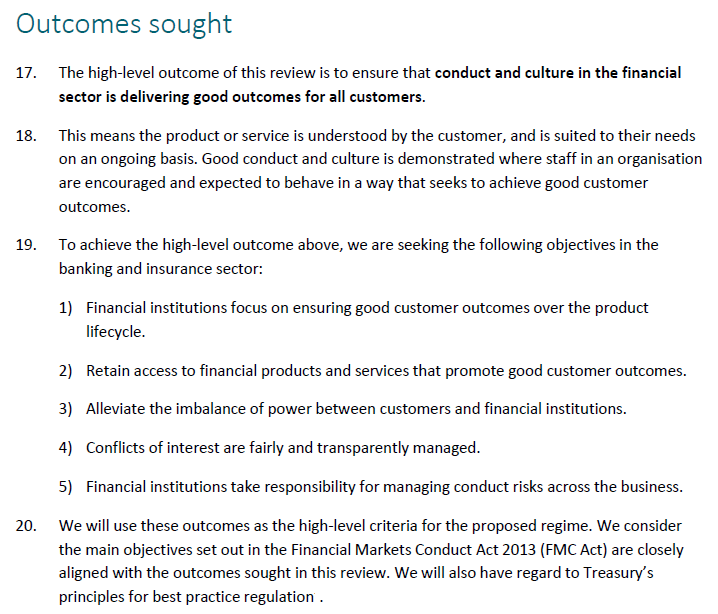 Look at the bold bit at the top there, which talks about "good outcomes for all customers".

I have a real problem with that.

How can you truly define what a "good outcome" is? I suppose we can all imagine what a "bad" outcome is, since it might involve us losing our shirts financially. But a "good" outcome? It depends what you said you wanted in the first instance and what you set out to achieve.

And I dare say the individual's view of just what a good outcome is from any financial commitment might actually change during the cycle of that commitment.

So, how is a financial institution supposed to second guess what you would regard as a good outcome when they sit down to discuss options with you?

Likewise, I think there's also difficulty in trying to put compulsion on financial institutions to design and fit the "right" products for the right people. Again this sounds good, but again there's plenty of room for debating what the right things are for people. And like the "good outcome" idea, the concept of what the "right" product is might change over time and depending on the individual's circumstances.

So, the worry from my perspective is that in trying to go down the path of regulating institutions for "good" conduct, we may open ourselves up for legislation that is incredibly complicated and expensive to adhere to.

I think this all also moves into the area of how obtrusive do we want the Government and its agents to be in terms of governing the choices we make and effectively perhaps trying to save us from our own decisions.

That's always a tough one, I feel. To what extent should a Government be trying to save people from themselves? Do we try and set up a Government that is capable of protecting everybody against any bad decision they might ever make?

I don't think that's possible. Nor is it desirable.

The individual needs to be free to choose and yes, to make their own mistakes and to handle the consequences.

What we want to avoid is people being railroaded into decisions they wouldn't make of their own volition by someone who has a vested interest in the outcome.

And that's where you get back to the idea of banning commissions and the like.

That therefore is the pathway I hope the Government follows on this.

The obvious problem with such an approach though is what it would do to the wage structure for the average financial institution. Any financial institution that is overly dependent on commissions to pay its staff decent wages is likely to be pretty unhappy with the removal of that buffer.

But I think that's the way we need to go. Keep it simple. Set clear parameters for what the financial institutions cannot do and leave a reasonable amount of choice in the public hands.

Potentially, that could be a mess.

I think the timeframe the Government has set for getting legislation in place - by the end of this year - is too tight. Because I think these issues of conduct are rather more complex than anybody might want to believe.

All I would say is, let's try to be realistic. Let's set realistic goals. We can't expect the financial institutions to be running around after us to make sure we get a "good outcome". But we can remove the incentive from them to flog us things we might not want. Let's start from that and work upwards.

Good article & fair comment.
However, another layer of regulation is not going to stop those wanting to something really big, or really bad come to think of it. My real concern is that we're currently educating ambition out of them before they arrive in the real world! That would be a real shame wouldn't it?
The article above is about an industry that thinks it is so cool it doesn't need to be told what to do - a bit like the media & communications industry really. There are others.
I've been following the Fairfax stories since way before the commission as they have been pretty up front in calling out the big boys at the banks for many years now. The only thing that shocked me was how the Liberal govt tried to protect their big bank mates for so long. Getting the ABC on side was crucial & I have to take my hat off to them for doing so, as these stories began in print over 10 years ago if my memory serves me correctly (which it doesn't always these days). The mere fact that we're all talking about this sort of thing today has it's roots in good journalism, something that's becoming scarcer by the day, sadly.
As always, governments are bringing up the rear with all this new regulation to protect us all from ourselves, but the real story is that life's a tough gig, comes with its fair share of ups & downs (both necessary if we are to grow up not just grow old) & that trying hard & failing is not a sin in itself.
But greed is. And from what we've all read over the past year or so, (some of) the financial boys & girls can't be trusted enough to behave properly so we now see this huge amount of head space, time & effort put into regulating greedy behaviour out of these industries.
As the article implies, it could go on for years.
God help us.

Good post. The other issue is in the financial services industry, there is often no one "right answer"...or at least the right answer varies over individuals and over time.

The risk is that a certain ideology gets imposed by fiat in what should still be a free and competitive market where different approaches should be tested.

The current push for low fee, passive, liquid, index hugging investments is one example. The net result is that institutional/HNW grade investing will become available for only the elite with very large sums to invest.

That 'good outcome' is likely, given the current Feelz-ridden zeitgeist, to be determined by SJW's and the 'We Know Best' crew.

So, yes, if we haveta Tell institutions anything, it has to be what NOT to do - what is verboten, not wanted, haram. Otherwise we'll nevah hear the end of it - Utopia is, like the 'Next World', always just around the corner, but perpetually out of reach.....hence there is an endless stream of 'corrective directions' to issue to us peasants.

It seems to me that bankers, i.e. people who we trust to manage our wealth, should be trained and regulated as a profession like any other profession, i.e. like Doctors, Lawyers, Engineers, Dentists and Accountants. That is is they should have a degree (as in other countries) dedicated to their particular profession, be required to be registered and partake in ongoing education and be subject to a professional disciplinary process.
It seems to me that just about anybody can work their way up this industry. Some have done some shocking things and they seen perfectly free to carry on working in the sector. No other profession can do this. It is hardly surprising that they fare poorly under scrutiny.