Updated data from the World Gold Council reveals sharp second half falls in consumer jewellry and investment demand for gold with only ETF speculation holding up overall demand
1st Feb 20, 2:55pm
by Guest 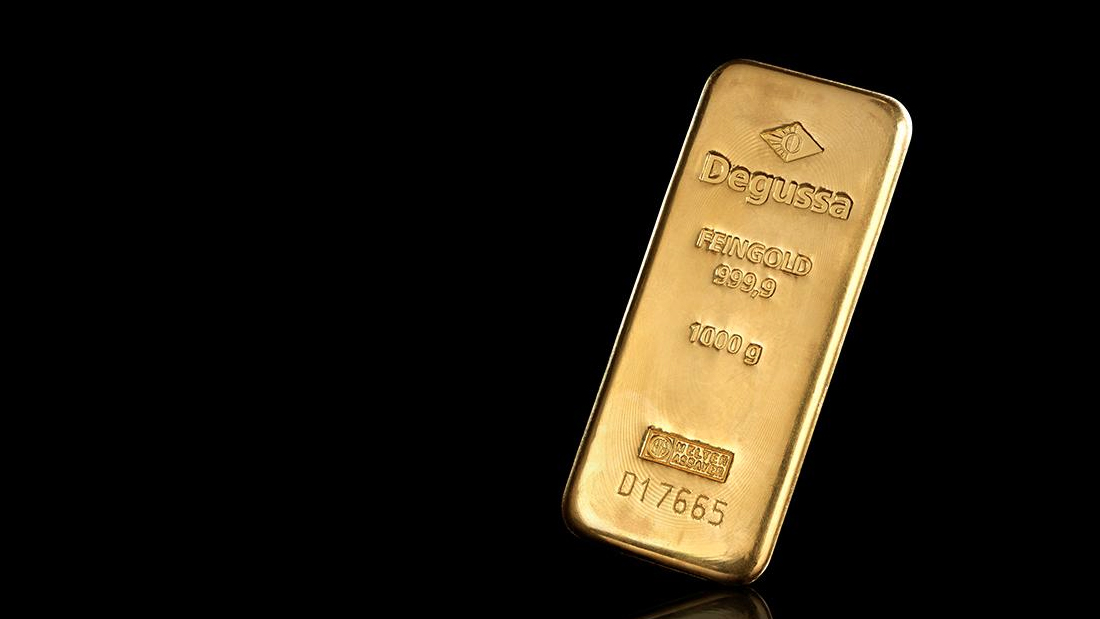 Gold demand fell -1% in 2019 as a huge rise in investment flows into ETFs and similar products was matched by the price-driven slump in consumer demand.

2019 was broadly a year of two distinct halves: resilience/growth across most sectors in the first half of the year contrasted with widespread y-o-y declines in the second.

Global demand in H2 was down -10% on the same period of 2018 as y-o-y losses in Q4 compounded those from Q3, notably in jewellery demand and retail bar and coin investment.

Central bank demand also slowed in the second half – down -38% in contrast with H1’s +65% increase. But this was partly due to the sheer scale of buying in the preceding few quarters and annual purchases nevertheless reached a remarkable 650.3t – the second highest level for 50 years.

ETF investment inflows bucked the general trend. Investment in these products held up strongly throughout the first nine months of the year, reaching a crescendo of 256.3t in Q3. Momentum then subsided in Q4, with inflows slowing to 26.8t (-76% y-o-y).

Technology saw modest declines throughout the year, although electronics demand staged a minor recovery in Q4. 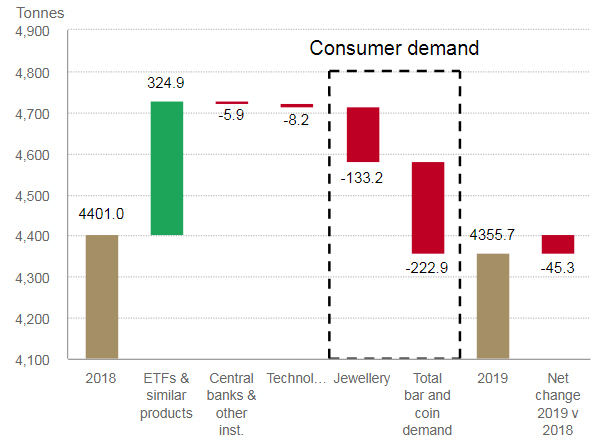 Total fourth quarter demand fell 19% y-o-y to 1,045.2t. Two main contributors to the y-o-y drop were jewellery and physical bar demand, both of which reacted to the elevated gold price. In US dollar value terms, the decline in Q4 demand was much shallower – down just 3% to US$49.7bn.

Inflows into global gold-backed ETFs and similar products pushed total holdings to a record year-end total of 2885.5t. Holdings grew by 401.1t over the year, with 26.8t added in Q4. Inflows were heavily concentrated in Q3 as the US dollar gold price rallied to a six-year high.

China and India held sway over global consumer demand. Together, the two gold consuming giants accounted for 80% of the y-o-y decline in Q4 jewellery and retail investment demand. High gold prices and a softer economic environment were the main culprits.

Total annual gold supply edged up 2% to 4,776.1t. An 11% jump in recycling was the main reason for the increase, as consumers capitalised on the sharp rise in the gold price in the second half of the year. Annual mine production was marginally lower at 3,463.7t – the first annual decline for more than 10 years.

The gold price averaged US$1,481/oz in Q4. This was the highest average price since Q1 2013. Although the price remained below the Q3 high, it was well supported. And gold priced in various currencies – including euros, Indian rupees and Turkish lira – hit their highest levels in history.

This article is a re-post from here.

Consumer demand in markets such as India is linked to the price of gold as well as deteriorating economic conditions in India.

Yes less bling but bullion to ward off the stockmarket sting.

But bullion demand fell almost twice as much as the bling.

I think it's pretty obvious what is happening.

Fear indexes are (at least should be) going off the charts. People are looking for safe havens and gold is/has been the best one for a few thousand years. However paying someone to hold gold through an ETF instrument (which is what many of them do, although some are just gold futures ETF), means you are paying someone to buy gold and store it in a secure safe, with the ability to sell that gold freely, like a share market trade. Perth Mint ETF, for instance, enables you to exchange your ETF for physical gold as it is physically backed.

Holding gold however is a little more dangerous (can be stolen/disappear in a house fire etc) and more difficult to change your position in. The higher the price of gold, the more a target of theft you are. As prices climb, people feel more exposed holding physical gold. Jewellery prices etc shoot up and people don't buy it.

Great for some of them still mining in NZ though! I helped a guy do some mining in Central Otago this time last year, digging through old tailings. Hard work, but could make a hell of a lot of money, he would pull out a few pound of gold a week, when his mobile rig was operational.

My girlfriend and I met a possum trapper on the Otehake river on Arthur's pass near some hot pools. He was telling me that he made mined a couple of troy ounces in a little over a week. Sounded like hard work though. 12 hour days on the sluice box. Hand pumping gold out from underwater cracks using a modified bike pump. That was back in 2012. There's more financial incentive now.

This is very significant in my opinion. The question we need to ask is: why? “Central banks were net buyers for a 10th consecutive year: global reserves grew by 650.3t (-1% y-o-y), the second highest annual total for 50 years”