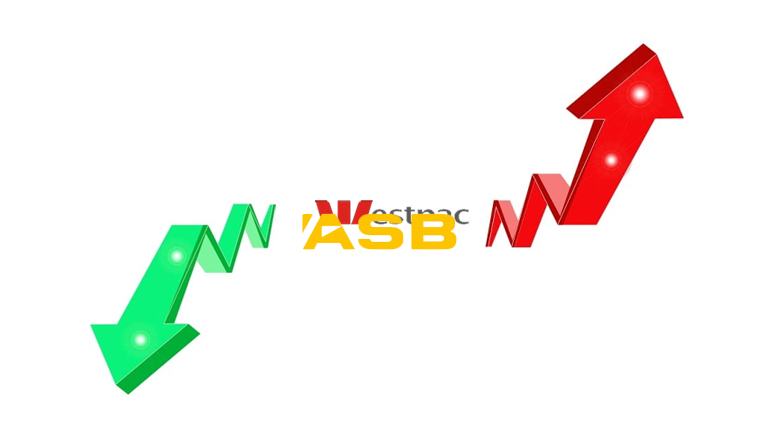 Fixed mortgage rates are on the move again as the background wholesale rate curve steepens.

ASB, New Zealand's second biggest mortgage lender, has made some changes, reducing some short term fixed rates, and raising some of its longer term rates.

The bank has cut its one year fixed rate by four basis points to 2.25%. At that level it is now lower than all its main rivals for a 12-month fixed contract. Its new rate matches the one year offers from ICBC and HSBC.

ASB has also cut its six month fixed rate by 40 basis points to 2.99%, which is now well below all its main rivals.

However, for terms of three, four and five years fixed, ASB has raised rates.

ASB's three year rate is now higher than its main rivals. Its four and five year rates are pitched above all key rivals except ANZ.

ASB last changed fixed home loan rate offers in late January at a time other large banks made moves too, all lower and at the short end of the rate set. It is likely other banks will follow Friday's ASB changes.

Update: Westpac has now announced that it will also change its rates, both up and down, on Tuesday, April 27, 2021.

Since the January changes, wholesale swap rates have moved higher, including for the one year term, up 10 basis points. Short-term rate rises have been restrained by central banks, including the Reserve Bank of New Zealand (RBNZ), by large, aggressive secondary market interventions. In the case of the RBNZ, it is via their Large Scale Asset Purchase programme. They intervene to add demand so as to keep interest rates lower than they would otherwise be.

Perhaps the reason the one year rate offer from ASB has been cut is that they have accessed $500 million of the RBNZ's Funding for Lending Programme, which delivers three year money at 0.25%. All major banks other than ANZ have now dipped into that programme.

Here we go baby ! Suck in the last of the home buyers before rates start increasing.

Yes I think the 2.99% 5 year is about to disappear across the board. Be quick if you want it.

I'd imagine you've got until this afternoon.

Justa
Agreed - a week or so ago posts were for interest upside and 2.99% was a good option but sadly may be a missed opportunity. Worth talking to one's bank about trying to even break and re-fix one's current term and rate.
Rates may not increase substantially but for much of the five year term that 2.99% may be pretty good.
The bottom line is for some upside and one needs to think prudently - looking at fixing longer term and paying down debt (especially any high interest debt).

Bring on a new type of perverse table mortgage by stealth, where the interest rate in each finance period is adjusted so that the interest portion of the payments in dollar terms remain the same across the life of the mortgage despite the principal amount dropping.

What if I told you the competitive rates aren't going to rise in any meaningful way? They'll likely reduce some more.

What's up with Heartland's 1 year rate? It's 30bps below the major banks, except for now ASB. Is there an expectation others will follow?

Must be hard for the first one in a cartel to make the move but we need inflation now to inflate away all this debt before the whole system falls over. The prices of everything is now climbing its just the CPI doesn't track it properly. Freight is now a killer and just this week its likely I will pickup business because of it. Faulty electronics products are now to expensive to return overseas for repair and then returned. NZ will have to become more self reliant and start manufacturing again.

What's this "we" business? We do not need inflation to destroy the value of our salaries and savings. The debt is the problem of the debtors.

I think the idea of trying to privatise the gains and socialise the losses is timeless.

Nonetheless the law states that inflation must be kept within the target band around 2%.

Idiots that borrowed heavily to speculate on house prices will need to be taking personal responsibility for their follies.

The problem is they will drag down anyone who legitimately bought a family home with them.

I don't see it being a big problem if things adjust downwards. A Big crash say 30% would only really affect those who bought in the last 3-4 years. And only if affordability becomes a terminal problem re personal finances.

To be sure the herald will proclaim the end of days. And a bunch of people who rely on clipping the ticket will face tough times, but they are all collectively bleeding us dry right now so who cares about them.

We could do with a good Dusting out.

They will still have their home.

Might be wishful thinking from my end, but I'd like to think if house prices were to crash substantially that it would be highly political, and that any owner occupiers who have legitimately purchased a family home would be bailed out.

As for distressed investors, I'd be happy to see their properties go to an auction where only FHB can bid, with a reserve price set at 4 x median household income.

Heartland are new to regular mortgages so they are trying to build up a mortgage book. They also seem to be making plenty of money so they are looking for places to invest it.

They do but they are smaller. I put in an application the other week, but the cash contribution on offer wasn't big enough to offset the fact I'd have to repay the entire cash contribution I received from my current bank 2 years ago, which effectively tied me in for 3 years. I can't recall the details but one of the requirements for getting the cash contribution was having $100k on floating (cheap @2.5%). If they are still sharp in 12 months, I think I might go with Heartland. Personally I'm all for having my lending with a NZ owned bank.

Bugger, had hoped we'd get thru to our refix before the long term rates moved. Might email the broker.

Anyone who thinks that the OCR represents some kind of hard ceiling on mortgage rates, take note. Too many people I talk to are under the misconception that the Reserve Bank somehow dictates lending rates to banks, and has the ability to put the brakes on if they ever get too greedy.

So here we go, the beginning if interest rate rises. (The 0.04% lower 1 year rate is just a token gesture).
That's BIG news!

Not 100% sure I agree it is token. For one reason or another NZers always fix short, so RBNZ data seemed to show few taking 3+ year rates. I think those rates will look good, looking back.

They can always sell the house and realise all those mad gainz.

What? If they were coming off a 3yr fix now and looking to refix for another 3yrs their interest rate would drop ~2%, making life much easier. Trying to guess what the interest rate will be in another three years is a fools game, we already know the RBNZ and the govt (of any flavour) will throw money around if it thinks the housing market might get a bit wobbly.

FLP was meant to avoid this. What's going on?

Not sure FLP has any influence on offshore wholesale rates for 3-5 years, well after FLP ends.

The economy is improving sooner than we know?

Nope we need to halt the house buying frenzy and save the economy from falling into an abyss. Inflation is here now like it or not.