Ernst and Young and Chapman Tripp pick out the loopholes and unintended consequences in new law to collect foreign buyer and investor data; suggest all buyers submit data

Ernst and Young and Chapman Tripp pick out the loopholes and unintended consequences in new law to collect foreign buyer and investor data; suggest all buyers submit data 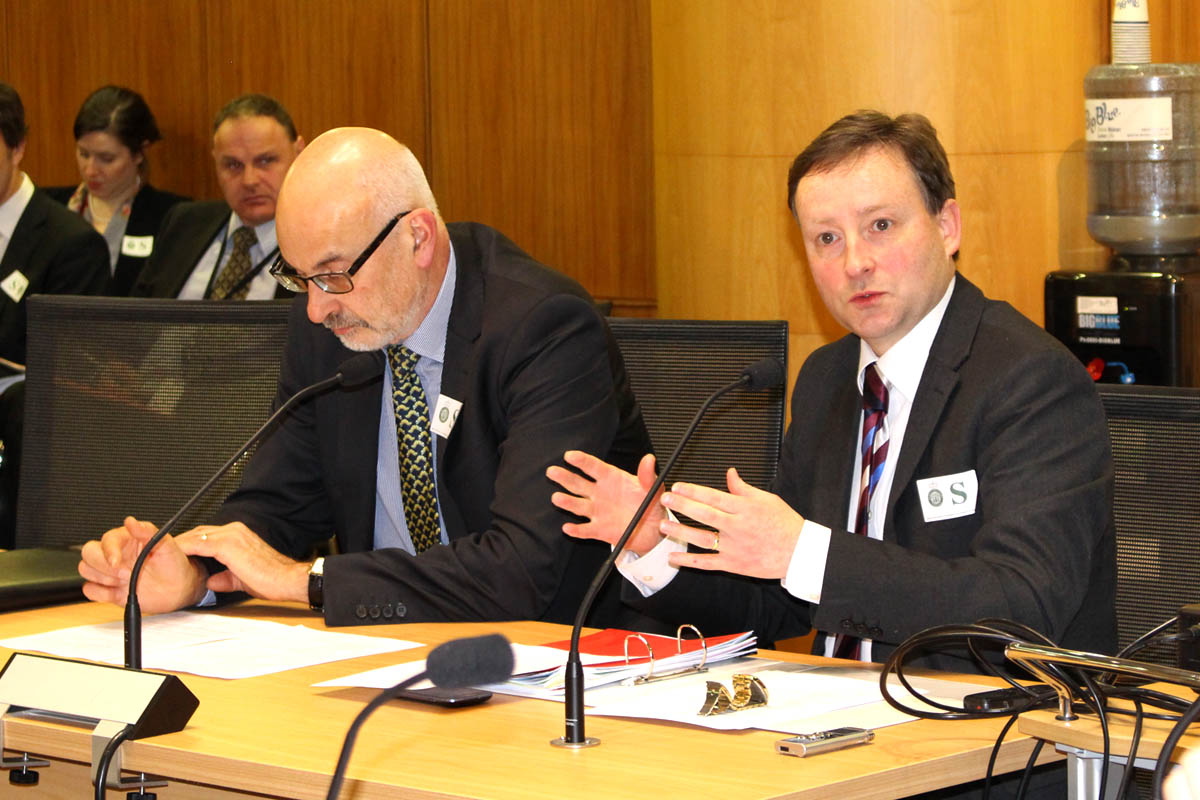 Tax law experts have picked out the potential loopholes and unintended consequences of rushed legislation to force rental property investors and foreign buyers to declare their IRD numbers and residency status.

Everyone buying and selling property, including New Zealanders buying or selling the family home, may be required to provide their IRD numbers if the government follows up on the first submissions on its proposed new legislation on offshore property purchases.

Parliament's Finance and Expenditure select committee on Wednesday heard submissions on the Taxation (Land Information and Offshore Persons Information) Bill, which was drafted in the weeks before the Budget in response to growing political pressure over the possible impact of foreign investors on the Auckland housing market.

Ernst and Young executive director David Snell told the committee there were "likely to be some problems for taxpayers buying and selling property other than non-residents. There could be some issues for conveyancers, for banks and even Inland Revenue itself with the way the Bill has been drafted."

He said there was "a degree of confusion, potentially, around the definition of 'offshore person' which we see as appearing to be a mixture of taxation, immigration and investment concepts" and he warned that the requirement that anyone with an IRD number also have a bank account "could cause some collateral and unexpected damage to overseas persons with only a fleeting association with New Zealand," including people here on secondment or oil rig workers who "don't even touch land here."

EY's solution to that was for the Bill to take a "bolder approach", Snell said.

"We also thought: if you are currently subject to tax overseas then just provide your overseas tax information number (your equivalent of an IRD number) as a matter of course. That would give a stronger information base, a clearer signal for taxpayers," he said.

"Similarly, as a potential simplification, why have the main home exemption? A main home can be quite a complicated, tricky concept that we may move onto and we thought it would be easier to just provide the information and be done with it."

Chapman Tripp Tax Partner David Patterson, also appearing before the select committee, agreed with Labour's Clayton Cosgrove that it wouldn't be an "earth-shattering imposition" to require everyone to provide an IRD number when buying or selling property, but said he believed the government would be reluctant to do it for political reasons.

"I presume it's been left out that way because we don't want to be getting into the bastion of real kiwis' homes," Patterson said.

"Presumably that's a political reason that people have decided that that's not a good thing, that we don't want to be causing aggravation to the normal punters."

Patterson said that, from a tax compliance perspective, there was "no real need" to remove the proposed exemptions for main homes from the legislation.

"The universe of people out there who are selling their main home who should be paying tax, is probably de minimis and you've got an exemption in there if they are doing it two times within two years then they fall out of the exemption," Patterson said.

He said that, from a statistical perspective, it could result in a "small deception of overstating foreign investment" because people who had bought a main home here and intended to live in it - but who were still a tax resident in another country - would be counted as a non-resident.

Catch 22? Can't get bank a/c without IRD, but can't buy without IRD or bank a/c

But Patterson agreed with EY that the requirement for foreign investors to get a New Zealand IRD bank account and IRD number could be logistically difficult to comply with.

"We've made enquiries with our banking lawyers who have suggested that, although the minimum legal requirement aren't that they have an IRD number in order to open a bank account, that many banks do operate that practice. And so there is that catch-22 situation. What we don't want to happen ... is that each of them are sitting there saying we are not going to act until you've got the other piece of information."

Chapman Tripp's solution was that Inland Revenue issue temporary numbers to non-residents needing to open bank accounts. Snell pointed to other areas of the legislation needing work. He said the exception to the "main home exemption" that applies if you have purchased and sold your main home twice within two years "could be a particular source of confusion."

He said if the offshore persons definition was retained, it needed clarification over the situation for people flying into the country and flying out and more work was required around co-ownership situations, family trusts and the situation around Australians with no Visa requirements.

Well called.
The exemptions [for registration] are unwarranted and unnecessary.

Don't need to open an NZ bank account ... why would IRD / NZ Government need to get into bed with banks in such a manner?

"Don't need to open an NZ bank account ... why would IRD / NZ Government need to get into bed with banks in such a manner?"

My guess is that banks provide another anti-money laundering control.
If the purchase also had to be routed through an NZ bank account then it would come under NZ's AML regulations and the funds would have an additional degree of traceability.

Herein lie the problem with this government's approach to everything. They simply add to the cost of compliance because the legislation they propose is often not drafted with clarity of purpose. They are literally 'all over the place'.

Yesterday we had BE saying the purpose of the legislation was an anti money laundering initiative - yet I thought it was a revenue (tax) initiative. And then John Key proposes to use the data collected to provide an understanding of the level of foreign direct investment in our residential real estate. Whatever.. it won't don't any of them efficiently.

This government writes bad law. Simple as that. And they ignore most of the good feedback given to them via the Select Committee process and via the Law Commission's various committees.

There is absolutely no extra cost in recording an IRD number.

At present when you buy a property you are required to fill in a page that asks if you are GST registered, if so you must add an IRD number.

Simply requiring the IRD number is no extra cost, LINZ could record it on their systems and the data can be linked to all government departments.

There is absolutely no extra cost in recording an IRD number.

I'm referring to the additional cost of compliance to offshore buyers. If for example, a mainland Chinese parent (or any offshore parent for that matter) wants to buy a house to accommodate their son/daughter while studying here - they may have no intention to collect rent. As capital gains are not taxed on the 'family' home - then neither do they need to interact with the IRD in that regard.

It all comes back to what exactly is this legislation trying to do? I'm confused.

Yes, it is confusing, however, I'm sure in the fullness of time someone somewhere will explain what is going on, what is intended, and how it will work, maybe, no guarantees

As stated in the article, too much of it is political, trying to avoid treading on the toes of sections of the electorate while doing the minimum to pacify the demands of others

I agree with your comment of yesterday, the driving force for this legislation is coming out of Beijing, and as Nick Smith has said, the results will not be publicly searchable when the carefully sanitized results do come out, if they ever do

And so why don't they just do the simple thing iconoclast suggests - require tax clearance for country-of-origin. I'm absolutely sure Beijing would be very happy to oblige. They seriously risk the wrath of the Beijing government by attempting some half-baked excuse for doing something.

Which brings me to my other point - are they that corrupt that they want this ill-gotten gain, the proceeds of crime from another sovereign jurisdiction.

Yes, if they don't it will be interesting how they plan to deal with the following

Chinese national rocks into Auckland with $5 million, opens a bank account, gets an IRD number, buys a $5 million house, supplies his/her Chinese-Tax-File-Number and pays for the house. Couple of months later IRD shares that data with Beijing tax man who comes back to the IRD and says that person owes us exactly $5 million in back taxes. Oh yes fun times to come.

NZ Banks are naïve in offshore dealing in Source of funds. A good naivety, well intentioned, but still.
IRD are on to it, completely ruthless, as they should be.

How so? can you elaborate?

IRD can and will unpick offshore trusts, beneficial owners of foreign companies, if they decide to.

As much as I despise bean counters, in a globalized world the term "residency" IS hard to define. There is residency for taxation purposes (easy to get) and residency for immigration purposes (hard to get). Usually residency is defined as the centre of life and that in turn is derived from where one's family is based. If you are single, then where your main workplace is etc. Ever read a double taxation agreement? Sheer hell.

At the same time, asking for a bank account and an IRD number should not trouble anyone and exchange of financial information on private persons among most OECD and other countries is scheduled to start in 2017, in any way.

An easy alternative is doing it by citizenship. Non-citizens one house max. But what about Australians then, and what about dual/multiple citizens?

This happens when a government operating in 2015 is mentally still stuck in the 1980s. The world has become incredibly fast and complex and our systems of administration are not up to the job because they have simply ignored what has been going on in the world for too long.

Very good comment Peter. But I would go a little further and say "Non Citizen - no house"

Right. If that happens, you can kiss this hard working, 33% tax bracket paying, legal, permanent resident goodbye. I won't be alone. Good luck with balancing the budget.

I also recommend that you check the definition of xenophobia.

Don't let the door hit you on the way out...

It is not hard to have everyone give an IRD number.
If it is hard for foreign investors - tough.