Property
MBIE believes the value of residential property investment over the next 5 years will be 2-5 times higher than Treasury projects; Twyford says Treasury's math is 'simply wrong' 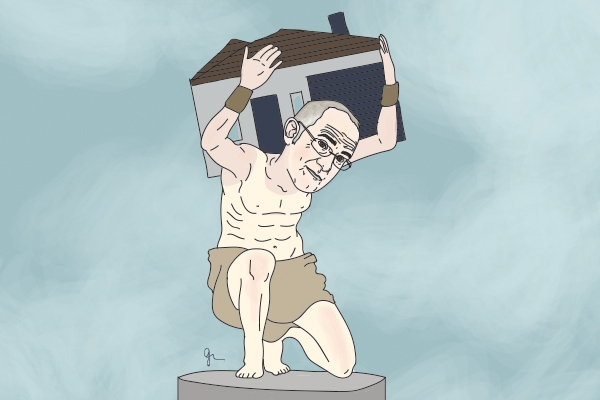 Housing and Urban Development Minister Phil Twyford is slamming Treasury for its estimate that the amount of investment in residential property over the next five years will be half of what was projected five months ago.

Treasury, in its Budget Economic and Fiscal Update (BEFU) released on Thursday, said: “Changes in the timing of capital expenditure on KiwiBuild since the Half Year Update (HYEFU) mean the boost to growth occurs later in the forecast period than previously assumed.”

Accordingly, it believes a greater portion of investment will occur after 2022 than previously expected.

“It doesn’t actually reflect the volume of houses that are being built and it doesn’t take into account the fact that KiwiBuild’s recycling capital over and over.”

Pressed on whether he was just trying to spin the numbers in his favour, Twyford pointed to a paper the Ministry of Business Innovation and Employment (MBIE) gave him on Tuesday.

While Treasury believes that $2.5 billion will be spent on residential property investment in New Zealand between 2018 and 2022, MBIE put this figure at between $4.8 billion and $11.6 billion.

With this somewhat on par with Treasury’s December projection of $5.4 billion, MBIE said it had recommended Treasury carry its projection from HYEFU through to BEFU.

In the paper, MBIE detailed what it believed to be a misleading set of assumptions used by Treasury. 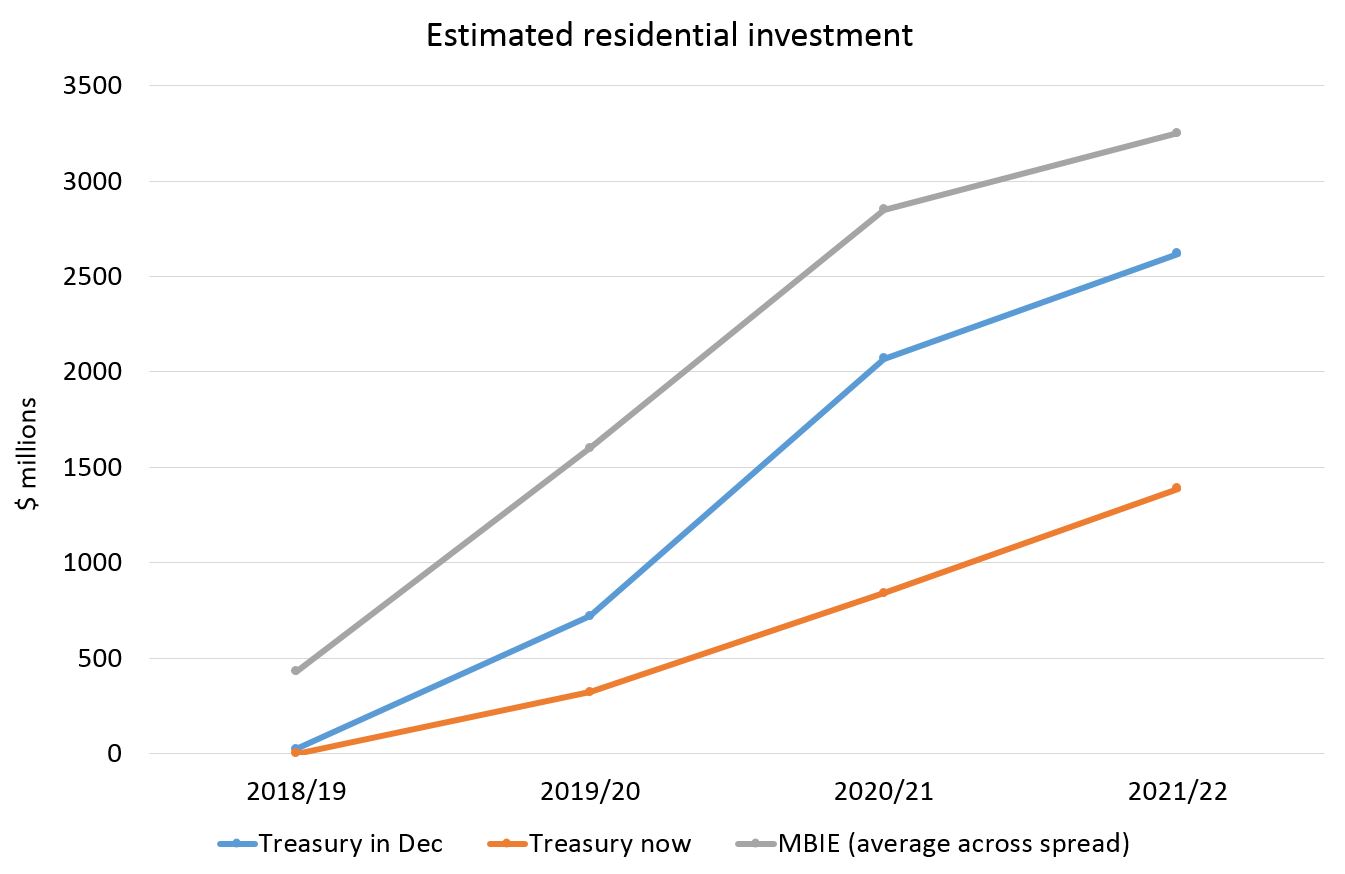 It said Treasury assumed that under the KiwiBuild model the Government would have to kick-start investment by parting with its money before the private sector.

Yet in reality, MBIE said that most KiwiBuild houses to be built in the next four years will be built through the Buying off the Plans scheme, which essentially sees the Government underwrite private development.

The majority of Government spending will therefore follow residential investment, rather than precede it.

Getting into the detail, MBIE explained: “Buying off the plans enables the Crown to induce high levels of residential investment from low levels of initial expenditure.

“If committing to actually purchasing the house, the Crown can expect to pay a 10% deposit up front and then not have to pay the other 90% until the home is completed. In between, the developer actually builds the new homes.

“Thus, a 10% deposit is enough to induce 100% of the residential investment required to construct a home before the other 90% of the purchase price is required.

“Alternatively, the Crown can guarantee to purchase a new home if the developer is unable to sell it. In this case, the Crown pays nothing up front, but its guarantee still induces 100% of the residential investment for the guaranteed homes.

“Even if the Crown needs to incur an expense against the chance that the guarantee will be triggered, when spread across the total portfolio of homes under guarantee, this provision is likely to be a relatively low proportion of total value (eg 10-20%).

MBIE also argued Treasury ignored the impact of houses being on-sold, as well as the investment that KiwiBuild would drive.

Twyford acknowledged that trying to model the effect of KiwiBuild on overall residential investment was “almost a hypothetical or academic exercise”.

Treasury in BEFU recognised there was a “high degree of uncertainty”.

Yet Twyford said, “MBIE is much closer to the industry and to the market. They have a much more intimate understanding of how KiwiBuild is being rolled out. Treasury have made a number of highly questionable assumptions.”

He wanted to make the point that even though the figures in Treasury’s BEFU were way off those in HYEFU, the Government hadn’t changed the “sequencing and the volume” of new houses to be built as a part of KiwiBuild.

The target of building 100,000 affordable houses for first home buyers over 10 years remains. The expectation for this to cost the Government $2 billion over five years, also remains.

Meanwhile, Housing NZ has hired ANZ and Westpac as it plans a series of meetings with fixed income investors ahead of issuing about $1 billion of debt before June 30 next year.

The Government has increased the limit on Housing NZ’s Borrowing Protocol, allowing it to seek financing from outside the Crown, from $1.08 billion to $3.05 billion. Any bond issue will be offered to both NZ and overseas institutional, or professional, investors. Housing NZ has an AA+ credit rating from S&P with a stable outlook.

So, who are we to believe: the Minister from the party that is notorious for not doing policy analysis, or the people for whom policy analysis is their bread and butter?

My guess, be it right or be it wrong, would be Treasury. In hindsight it s obvious Treasury wielded great fiscal influence in the last government. That was, one suspects, because that government set rigid financial objectives and came to rely on the accuracy of Treasury forecasts and monitoring. To put it another way, the outright priority was a satisfactory balance sheet for “Corporate New Zealand.” The impact of that administration can be seen in what is emerging from the Southern Response EQ claim management where restricting financial outgo took priority over the fair rights of the policy holder. But in terms of today and this column here, if you are just talking financial numbers, then surely it is a foregone conclusion that Treasury should be the bible in this regard. If they cannot be trusted in their ability to analyse, then surely we are all in quite a lot of trouble.

Gone with the budget Wind !

How can anyone believe these flip flopping lot ?

Looks like a different perception between commitment and payment, looks like MBIE does not like accrual accounting. From a cash accounting perspective MBIE might be right. However, as a tax payer, I prefer Treasury's perspective.

As far as I can recall the only cabinet minister who “slammed” treasury in such a manner was the Right Honourable Gerald Brownlee. That was over EQC & Southern Response predictions, or more bluntly, blowouts. Looking at that now Treasury 1 Bownlee nil. Brownlee, Twyford, spot the difference. We elect them. Guess we deserve them.

MBIE should know, they have experience in cost blowouts. It’s literally written in a $67,000 stone sign. Don’t need $140,000 LCD screens to tell you that.

Oh dear, how cynical, how true! You would have to think that they contributed that sort of extravagant “expertise “ to their comrades in arms over at the Ministry of Health for their overblown headquarters budget.

A certain Mr Joyce doesn't work for MBIE does he?

I am deeply bothered by this "if they are unable to sell it" business.

If you are unable to sell something you lower the god damned price.

The developers will lose money if they lower the price as you suggest, so they will go bust, then nothing gets built. In order for houses/apartments to get built, developers need to know they can make a profit and show that to the banks so they can get finance to start the projects. That's why the Government is guaranteeing a fixed sale price

So we are splitting hair here, right?
the clever dudes in the MBIE who have "intimate understanding of how KiwiBuild is being rolled out" will tangle themselves with 10% deposits and kick the can down the road for 12-24 months depending on the project at which time they will still have to come up with the remaining of the money .. and that is what treasury said !
Now, they are hoping for two things to happen like clock work:
a- they sell all the units bought of the plans ( very risky business)
b- sell the unit underwritten by the Gov otherwise they have to wear them!

So nothing could supposedly go wrong ... and by doing so they think that that will encourage the private sector and developers to pop out loads of affordable units every 9 months for the Gov to buy.

Why not share this "intimate understanding of how KiwiBuild is being rolled out " with the public to assure people that there is no rat in this delusional project ?

Maybe they would like to tell us who and how many projects they have signed on or have in the pipeline and when ?

The KB story has changed so many times if has got beyond the joke and no one could believe this ponzi scheme anymore.

Did Mr Twyford actually pass 6Th form mathematics?
I think I on past performance our Reserve Bank would have a bit more of an idea on finance and figures than Mr Twyford who has chopped and changed so much and wouldn’t have a clue about the no.s of units or houses that can go on 29 hectares on the Unitec land

This has nothing to do with RBNZ.

The Treasurey and The Reserve Bank are linked I would’ve thought?

Incorrect! In terms of the memorandum of understanding between these two departments the RBNZ is not specifically involved in government budgeting, but is involved principally in monitoring and enforcement of the government’s statutory obligations and monetary control.

Another comment showing a basic lack of knowledge. Mind you his comment about Jacinda’s pregnancy would have to be his worst.

Are you for real or a robot?

Still, the maths is possible. If they sign eight properties up on a 10% deposit basis and flip them on completion that only costs 80% of a house with a 20% buffer. Question is though, is that what they are actually doing? Or is it just hypothetical.

Hardly, we agree. You should have posted beneath my likewise comment above.

What rhymes with fact?

Confidential Information:
Many builders in Auckland aren't able to sell their newly developed properties and are asking Housing NZ to buy these properties. This gives us some idea, where the market is heading. Cheers.

When you hear of this massive housing shortage, but there are 12,000 listings on trademe, and home builders advertising already built ready to go houses at hobsonville on the radio you have to wonder when the reality check is coming due.