Rural News
The rural sector has enough challenges to face without being kneecapped by a government intent on appealing only to its most vocal supporters, says Allan Barber 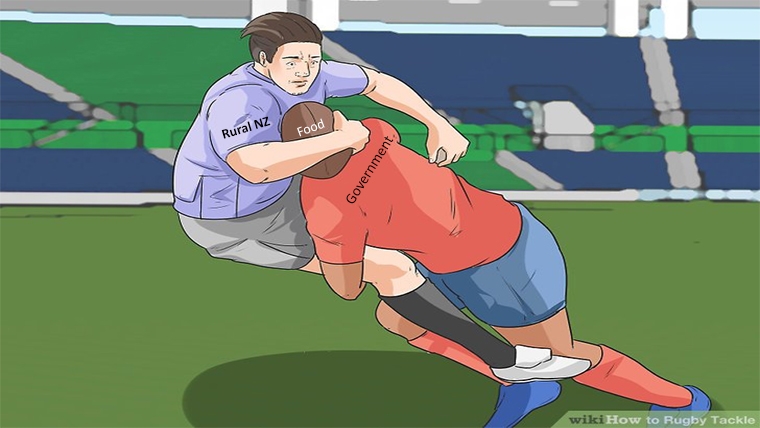 The latest Rabobank quarterly Rural Confidence Survey has shown a dramatic fall in farmers’ view of the outlook for agriculture in the coming year, although their pessimism is not so pronounced when considering the prospects for their own farm performance.

Over half the respondents anticipate no change in their farm performance, while the rest are fairly evenly split between optimists and pessimists.

The main reason for the decline in confidence was specified as government policy and this was before the release of the Essential Freshwater policy proposals and consultation programme. Other reasons given were the future greenhouse gas obligations contained in the Carbon Zero bill, international trade uncertainties, negative public perception and, especially among dairy farmers, Fonterra’s performance. Surprisingly, concerns over bank debt fuelled by the Reserve Bank Governor’s rhetoric didn’t feature prominently, although that may change.

To this point international trade appears to be the least of the problems confronting the sector, ironically, with competition between the USA and China driving up bull beef prices, while China is proving to be a positive influence on the continued strength of sheep meat returns.

The looming drop-dead Brexit date of 31 October may yet produce unpredictable outcomes, but at least the UK retailers have committed to the chilled Christmas trade. The most significant effects of Brexit will take time to become clear, but the British supply of lamb to the French market and Irish beef to the UK are two of the biggest and least predictable distortions.

Other potential negatives include the just concluded USA/Japan free trade agreement which matches New Zealand’s gains under the CPTPP, notably for chilled beef for which NZ exporters have regained market share previously lost to Australia and the substantial number of Argentine and Brazilian beef plants which have been granted licences for export to China. While Japanese buyers will respond to price signals from tariff reductions, demand from China is likely to remain strong because of the combination of growing middle class consumption, the effects of African Swine Fever on the pig population, and the clamp down on grey market access for beef.

If the Rabobank survey is to be believed, the government needs to work hard to regain farmer confidence which it could do, if it demonstrated a willingness to listen to concerns about lack of scientific rigour in the two flagship planks of environmental policy, Carbon Zero and Essential Freshwater. Without having seen a reliable survey, I believe the majority of farmers are committed to the principles in both Bills and are quite prepared to work towards implementing a scientifically justified action plan. But if the government persists in requiring farmers to meet impossible methane and nitrate leaching targets, it will wave goodbye to any chance of farmer support.

In the lead up to next year’s Election it is possible, even probable, New Zealand First will prevent policies being brought into law which threaten to damage the rural sector irrevocably. However, given the age of that party’s leader, this may not be a viable long term strategy, while the influence of younger voters is likely to gain more traction with a Labour/Green government. Trying to change the government’s mind on introducing policies which appear to give farmers a free ride – however unjustified that viewpoint may be – will be difficult in an Election year, but it will be even harder without the moderating influence of NZ First.

A recent piece of good news has been the Environment Court’s rejection of Land Use Capability as a nitrogen allocation mechanism. Federated Farmers and the Lake Rotorua Primary Producers Collective fought a proposal from the Rotorua District Council to allocate nitrogen discharges using LUC methodology. The Court found LUC was not a satisfactory means of assessing natural capital which is about more than just the impact of nitrogen on soil health. Under the Council’s proposal, dairy farming nitrogen discharges would have faced a reduction of 80%, sheep and beef 40%, while forestry’s allocation would have increased six times. This would have had a catastrophic impact on the economy in the area. It is noteworthy Bay of Plenty Regional Council also objected to the proposal.

On another positive note, Agriculture Minister and Minister of State for Trade and Export Growth Damien O’Connor, has headed to Bangkok to attend the next round of talks on the Regional Comprehensive Economic Partnership which involves the 10 Asean countries plus six others including China, Japan, Australia, South Korea and India as well as New Zealand. These countries generate about 28% of global trade and take more than 50% of New Zealand’s goods and services exports. O’Connor believes the RCEP deal could be concluded quickly, if the collective spirit is willing, but talks have been going on since 2012.

The government clearly believes in the importance of agriculture to the economy, but it needs to recognise it won’t keep on happening without farmers’ cooperation and hard work and for that it has to get farmers onside. The rural sector has enough challenges to face – rising costs, compliance, alternative proteins, bank pressures, succession planning to name a few – without being kneecapped by a government intent on appealing to its most vocal supporters and leading the world with its environmental commitments.

Sadly this government does not understand business. this government right now is setting NZ on a business course that due to poor policy settings and inability to discern business performance insights (due to lack of business experience) that will change NZ's fortunes for the foreseeable future. trends al ready becoming visible, kiwis outward migration increasing again, business confidence dropping, (despite record low interest rates) debt climbing, productivity dropping (along with income inflation prospects)!!

Product prices high and rocking along, interest rates lowest ever, regional council plans in making for 5 years plus much harder on water than current freshwater plan(any science here?), $200 million plus for water fencing in budget, taxpayer putting how many 100s millions for M Bovis, 1BT grants $200 million for planting - they hate us ? Am I on the wrong planet?

Barking up the wrong tree?