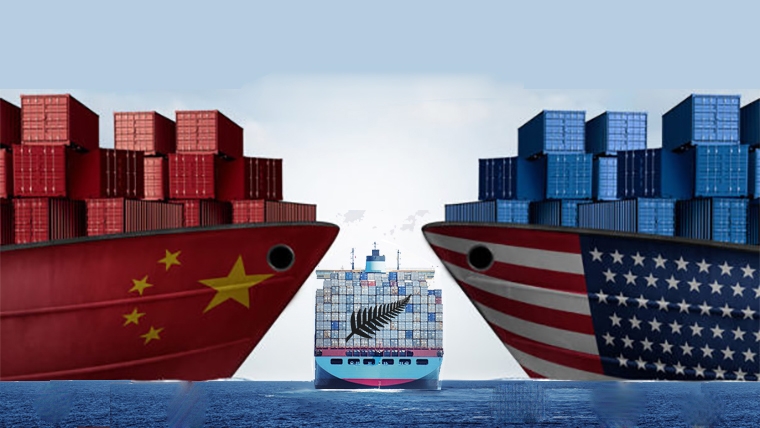 Between the ‘second wave surge’ of COVID-19 affecting many parts of the world, plus the seemingly ongoing issues between China and the US, there should be good cause for concern about New Zealand’s exports especially to China, although exports between all nations are affected directly or indirectly in some way.

To date New Zealand has been the beneficiary of China’s demand for food and in particular dairy products which we are happy to oblige in supplying. But given that even China needs exports to fund its purchases, or at least to pay competitive prices for them the weakening of the world economy must be of concern. Unemployment is rising around the globe; countries are going back into lockdown mode which means food service demand must reduce and governments ability to keep propping up their domestic economies must be getting stretched. All this should be leading to falling prices for exports.

At the moment we have seen milk prices rise in the last two GDT auctions and while beef and sheep meat products have softened, they certainly haven’t collapsed and are generally following the usual pattern of dropping from now through to April when they start to improve again.

So, given that China and the US are major drivers in keeping the world economy functioning, a look at their impacts on food production supply and demand provides some interest. When it comes to food both are among the top four along with Brazil and India.

Direct comparisons are a little difficult as each country has a different mix of products and using values when there are different domestic economies at play also may give the wrong outcome. But needless to say, both the USA and China play very important roles in feeding the world’s population. The biggest difference is the amount of surplus food left over after their respective domestic demands have been met, which are then exported. Also, what demand is there for food not able to be produced domestically and required to be imported?

This leads the two countries to have something else in common; they are the two largest food importers in the world. This is despite the huge disparity in population between the two countries; that is, 1.4 billion people in China versus 330 million in the USA. China ‘s demand is driven by its huge population and the USA seemingly by its huge appetite. In 2019 China passed the USA as the world’s largest food importer.

The graph below shows the increasing value of agricultural exports versus imports from the USA. 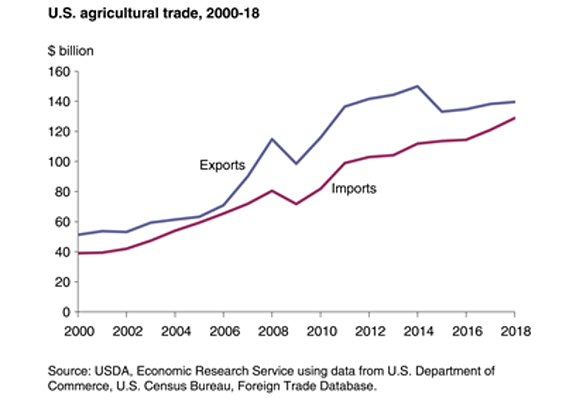 Their gap between imports and exports is shown to be reasonably consistent over time, whereas for China, the gap is widening with imports increasingly outpacing exports. 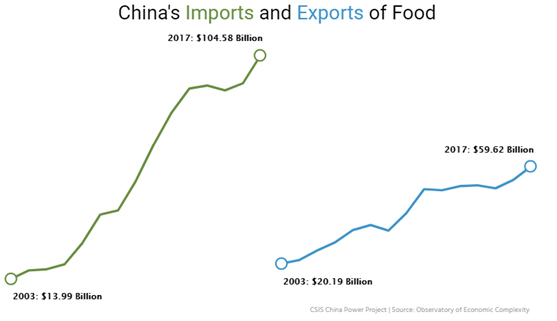 The Chinese hierarchy back in 1996 made the decision that China was to aim to be 95% self-sufficient in staple foods (including rice, wheat and corn). It has been largely successful in achieving this although as the respective graphs show.

The USA exports more than it imports whereas China imports almost twice as much as it exports.

This largely appears to be due to two main factors. The first and most obvious one is the size of China’s population. The second is due to the changing demographics of China’s population and the growing move towards the more protein rich Western diet and no doubt the ability of the growing middle class (and above) to afford to purchase more of the domestically and imported produced food.

The move to a more Western diet is obviously to New Zealand’s benefit with animal protein in the form of dairy and meat proteins making up the bulk of our exports to China. I have had the mistaken belief that New Zealand was one of the largest primary production exporters into China, by value anyway. However, there are some notable countries ahead of New Zealand although we still feature as an important supplier. The main feature of the graph below is the growth of most of the suppliers although there has been a drop off from the peak demand of 2018 except for the EU. Geo-politics are interfering with the USA and to a lesser degree Australia, which have continued into 2020. 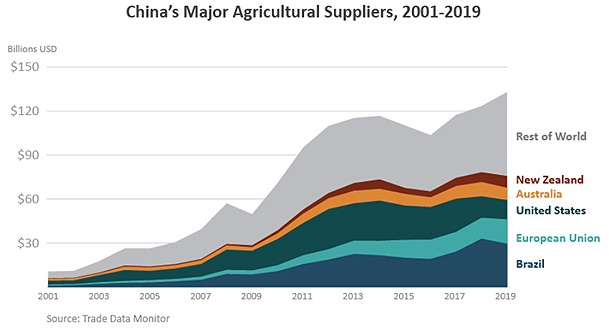 The “Phase 1“ agricultural trade deal is meant to increase USA agricultural trade with China considerably and redress the imbalance in trade between the super powers, and the graph shown below was obviously constructed before the full impact of COVID-19 was felt on trade as the US$35 bln forecast is now believed to be nowhere near being met and likely to be more around half that value. The coronavirus has put a handbrake on trade between the two. 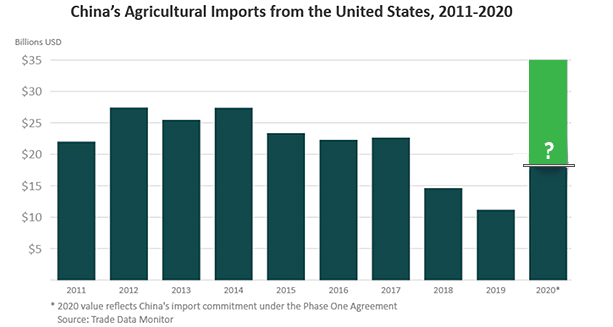 Top dairy suppliers to China are the EU and New Zealand. The EU dominates China’s infant formula market, with an overall dairy market share of 45%. New Zealand has expanded sales under its free trade agreement with China and now enjoys a 40% market share. New Zealand also features (with Australia) in beef supplies to China. 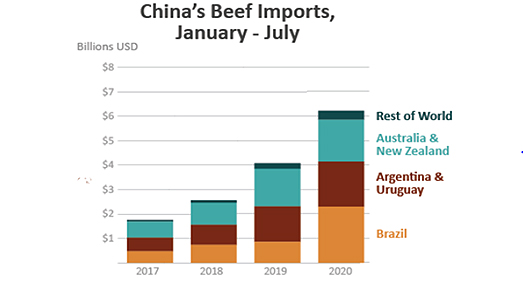 China’s economy, as with every other country in the world, took a massive hit from COVID-19. The big difference with China compared to most others is the speed it has bounced back into positive territory. Their GDP growth is still modest by China's historical standards but would be the envy of most other economies. 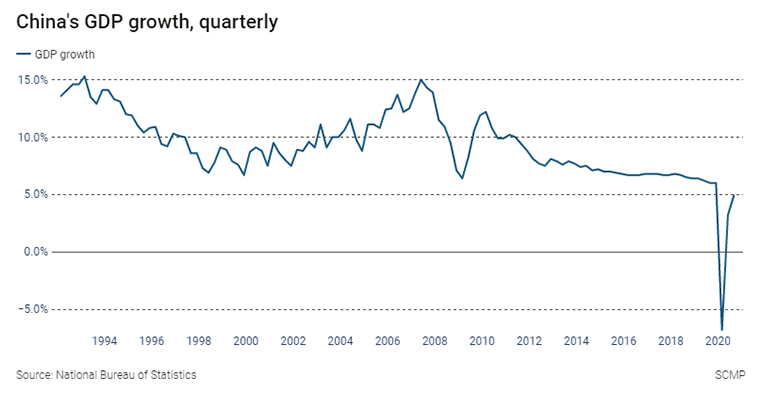 From a New Zealand perspective, the strength of the Chinese economy provides some certainty of strong support for the rural economy at least, especially while the USA is unable to export all it would like there.

However, into 2021 the handbrake on USA exports is likely to come off and this may soak up some of the demand that New Zealand is currently enjoying.

From where I sit, the threat to sheep and beef meats look to be where the greatest risks lie. Mainly because, while China is important, we still rely on a wider mix of countries of which many are experiencing the ‘second wave’ of COVID-19 and food service demand is unlikely to recover from its dried up mode. This is ironic given the concerns most have had around the dependency New Zealand has had on China and calls for a greater spread of markets.

The biggest gain that could help New Zealand exports will be when a vaccine is commonly available and the whole world economy can return to some form of normality, whatever that is.

NZ farmers need to worry more about some of crazy things this government claims to do than worry about any fight between the US and China.

Why does Guy parrot this 'return to normal' shyte?

Normal was the application of fossil fuels (energy, plastics, fertiliser) to agriculture. That surplus energy gave us surplus time; time to diversify, time to do all sorts of things other than food production. But normal started with coal about 1800, and only really took off following WW2. That's not 'normal', that's temporary.

So now we have a predicament. Too many people being fed by a temporary arrangement with globally-impacting emanations. China's leadership will be aware of this, so too, will some remnant of intelligence in the Pentagon. Who blinks first? And both are incapable of repaying their debt - so who blinks there, too? And at that point, what are the tokens we earn - from either - going to be worth?

Nearly half a century ago, in Scientific American, ecologist C.C. Delwiche warned: “Of all man’s recent interventions in the cycles of nature the industrial fixation of nitrogen far exceeds all the others in magnitude.”

A report sponsored by the European Science Foundation says that industrial production of reactive nitrogen: “…represents perhaps the greatest single experiment in global geo-engineering that humans have ever made.”

Biogeochemist James Galloway writes, “We are accumulating reactive nitrogen in the environment at alarming rates, and this may prove to be as serious as putting carbon dioxide in the atmosphere.”

Yes, when will we get it.

Agree with you. And under a trump administration all things environmental are going backwards with his decimation of the EPA, pulling out of the Paris Climate Accord, and his disbelief in climate change due to the fact he thinks he ( in his own words) is second only to God when it comes to scientific knowledge (even though he doesn't have any education). Hopefully people will see through the spewing right wing extremist vitriol of fox entertainment and vote with their brains. The saying in America...Dump the Turd on Nov 3rd.