Local demand for logs remains strong as does Chinese demand; not so for India. However, export demand for China's furniture is weak even though fibreboard production capacity is rising very fast

Rural News
Local demand for logs remains strong as does Chinese demand; not so for India. However, export demand for China's furniture is weak even though fibreboard production capacity is rising very fast 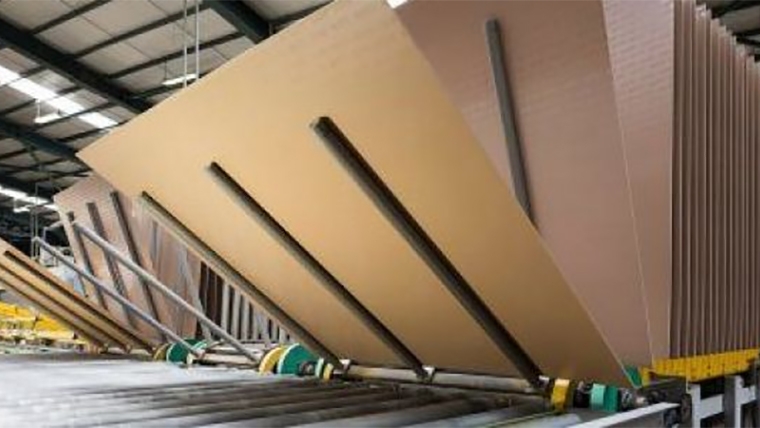 Domestic demand for logs and sawn timber remains strong with regional differences in log supply and demand due to previous mill closures, and increased harvest volumes in the better weather conditions.

The October At Wharf Gate (AWG) log prices received by forest owners increased by NZ$4-5 per JASm3 from the September prices. Demand for logs remains strong in China driven by domestic consumption for construction, however China’s export markets for furniture and other wood products remains weak.

Due to the increase in export log prices and domestic structural prices the PF Olsen Log Price Index increased by NZ$3 in October to NZ$119.  The index is currently NZ$3 below the two-year average, NZ$5 below the three-year average, and NZ$4 below the five-year average.  For the last three months the index has tracked along the same path as the corresponding period last year.

The balance between log supply and demand is varied around the country.  Most regions in the North Island and the lower South Island have an excess of supply and particularly non-FSC logs.  Nelson and Christchurch have a shortage of structural logs, but sufficient pruned logs.  Prices for structural logs have increased by $2-$4 per tonne in Northland and the South Island.

Domestic demand for both industrial and structural sawn timber is strong and remains well ahead of predictions.  There is usually a quiet period leading up to a general election in New Zealand as people delay projects to see what the new regime may bring.  This year the domestic demand for sawn timber has remained strong.  The very low interest rates and a higher number of expatriate New Zealanders returning to New Zealand has driven demand.

New Zealand exports of fibreboard to China fell 27% in the first half of 2020.  This is explored further later in this article.  Export markets are still relatively strong.  The clearwood demand in Europe remains strong despite uncertainty due to Covid-19.

Log inventory in China has increased about 300k m3 in the last month to around 4.6m m3, with congestion now only at the one area in Lan Shan where there is a 12-14 days delay in ship unloading.  While this level of log stock is higher than usual at this time of the year, an increase of 300k m3 was not unexpected as China went through Chinese National Day Holiday week in the first week of October.

Daily log use in China is now reported at 100k to 105k m3 which has increased by 20k m3 from last month.  The busy construction season that we predicted is happening.  There are differing views on how long this activity will last, but it would be good for New Zealand log suppliers to see stock levels reduce during this high demand period.

The CAIXIN manufacturing PMI index moved down slightly in September from 53.1 to 53.0.  This shows the sector remains healthy.  (A PMI above 50 indicates expansion and the August number of 53.1 was the highest since January 2011).

The weakness of the furniture markets (both China’s domestic and export markets) has contributed to the rapid shrinking of the medium density fibreboard (MDF) market.  China exports of furniture products fell 24% to US$ 7.4 bln in the first half of 2020.  A rise in customised home furnishings in China has also led to the rapid development of the particle board market (low density fibreboard), at the expense of MDF.

Recently, the Guangxi Lelin Group and Dieffenbacher concluded a deal for a 600,000 m3 per annum formaldehyde-free fibreboard project.  This, the Group claims, will be the largest single-line production plant in the world.  The continuous press is 2.7m wide and 80 m long.

China export of plywood to Europe is back to normal levels but exporters are having to cope with increased freight costs from 1,400 USD per FEU to 2,000 USD per FEU over the last couple of months.  The strengthening CNY against the USD has also meant exporters have requested price increases of 3-5% which the market is resisting due to uncertainty as Europe suffers further Covid-19 impacts.

Uruguay logs are usually sold at about a 10% discount to New Zealand logs and customers are shifting to the lower priced logs to offset their losses from the impacts of Covid-19.

Sawmills in Gandhidham (near Kandla) are now operating at 70% capacity, as labourers have started to return from their homes in the East. Many of the workers in this area are from the poorer states in the East such as Uttar Pradash, Odisha, and Assam. After Diwali in mid-November, many sawmills expect productivity to return close to 100%.

In Tuticorin prices for sawn timber are higher at 521 INR per CFT.  There is a log shortage due to container shortages.

The NZD weakened against the USD in the latter part of September and had almost dropped 2 cents from a mid-September peak when October AWG prices were set.

The CNY has continued to strengthen against the USD increasing the buying power of the Chinese log buyers. 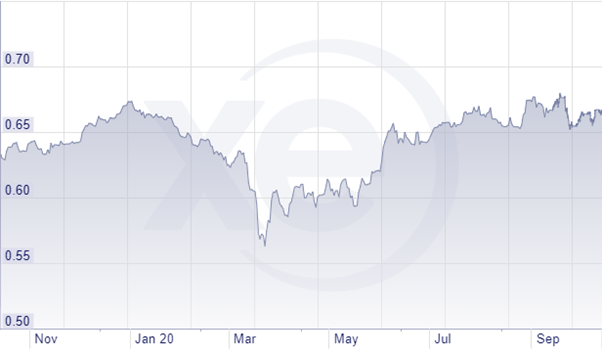 Freight rates for logs to China have increased by 1-2 USD per JASm3  over the last month. 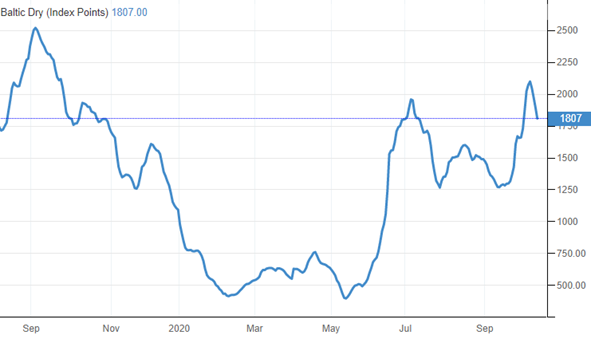 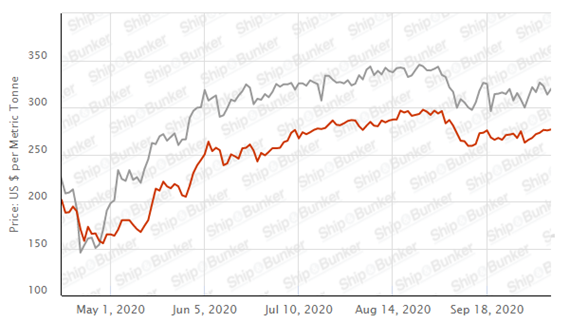 Due to the increase in export log prices and domestic structural prices the PF Olsen Log Price Index increased by $3 in October to $119.  The index is currently $3 below the two-year average, $5 below the three-year average, and $4 below the five-year average.  For the last three months the index has tracked along the same path as the corresponding period last year. 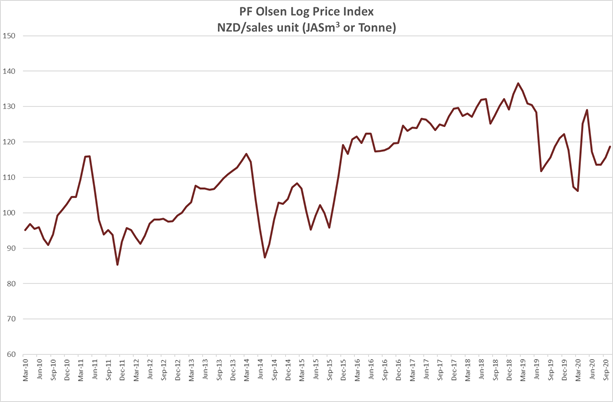 Maybe in the future China will export those boards worldwide. Looks very solid.