Guy Trafford reviews the big power competition, and how NZ positions itself after the core rivalry shifts from amateur name-calling to a real and serious geopolitical tension, where trade can be a collateral sacrifice

Guy Trafford reviews the big power competition, and how NZ positions itself after the core rivalry shifts from amateur name-calling to a real and serious geopolitical tension, where trade can be a collateral sacrifice 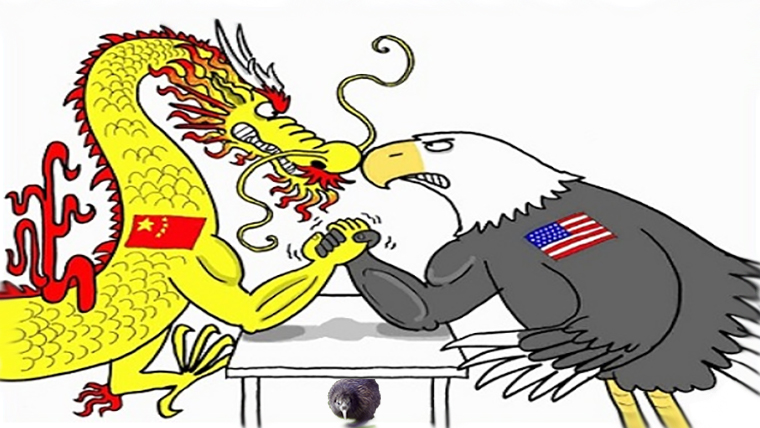 With the focus on China as our major trading partner, it is also worth watching how its stakes rate internationally. This is mainly because New Zealand, while at the moment is successfully walking the fine diplomatic and trade high wire, it is at risk of losing favour with our other trading partners if we are seen as turning too much of a blind eye to the behaviour of the Chinese state.

Under Trump, US attitudes towards any country were heavily discounted due to the excesses of his policies and rhetoric. However, the latest Gallup poll held on US public attitudes towards China has been conducted several months after his departure and they have hit a record recent low. Only 20% of those surveyed viewed China favourably.

This is at a level last seen after the crack down on democracy resulting in the Tiananmen Square deaths. While much of the falling favour will still be a result of the Trump rhetoric there is still a lot that must make traders with China nervous about future trade prospects.

As New Zealand tries to steer a neutral path when it comes to trade, the Russian precedent does show that the New Zealand Government does respond to international pressure when its reputation for being a “good international citizen” is called into question. In this case back in 2017 then Foreign Affairs Minister Winston Peters brought up the potential of New Zealand reviving the negotiations of a Free Trade Agreement (FTA) with Russia. However, the idea was quickly put to bed when EU ambassador of the time opposed it and there was the tacit threat that if New Zealand wants to pursue an FTA with the EU then we had better toe the (Western) party line.

In reality an FTA with the EU looks no closer now than it did back then (perhaps with the changing globally scene through COVID-19 and Brexit even further afield.

The Russian trade ‘constraints’ were brought in, in 2014, as a result of the Crimea invasion and the then crisis with the Ukraine, neither issues have been resolved (but arguable if you’re in the Russian camp) and there seems no way forward to allow trade to get back to a pre-2014  basis. While fully UN endorsed sanctions were not applied due to Russia having Veto power most of New Zealand’s more powerful western ‘allies’ have applied a range of trade and policy measures. As a result, the New Zealand attitude has been to take a ‘hands off’ approach and not take advantage of potential opportunities that may have arisen as a result of others not now trading with Russia.

New Zealand as a signatory to the UN does adhere to quite a few trade embargoes and sanctions, however these are all lesser trading nations with us mostly in the Middle East and Africa and so have little impact on trade and have got through the UN process mainly due to the lack of the vetoing nations (US, UK, France, China and ... Russia) intervening.

For this reason, any formal trade sanctions with China will never occur. However, as the Russian situation showed there are plenty of ways other, powerful, nations can apply pressure to any nation supposedly over stepping the ‘West's’ point of view. As an aside, the New Zealand Government did have a paper in the wings (2012) called the “Autonomous Sanctions Bill” which was designed to allow New Zealand to have enshrined in law an independent foreign policy unencumbered by the influence of other nations or the UN. However, towards the end of last year it was, finally, swept off the table and is not likely to reappear. An independent policy may have been a nice idea but was not recognising the reality that we are in an integrated world and while the big players may have the luxury (again, arguably) of not having to answer to other for their policies, New Zealand certainly is not in that category.

Back to the Gallup survey. Perhaps not surprisingly Republicans were somewhat ahead of Democrats with only 10% finding favour with China with Democrats at 27%. The UK and Canada were up in the 90%’s to give some credibility to the results.

The New Zealand government has lately, with the safety of numbers of another 39 nations, criticised (again) the way the Chinese government has undermined the rights of the Hong Kong citizens. China’s response is to usually brush off any criticisms. However, the WHO report of the source of the COVID-19 virus is due to be released and while the virus lab is not expected to be targeted, China’s handling in the early days which allowed the virus spread, is. This is likely to bring more criticism upon the Chinese government.

However, China’s role in international trade means that it is not likely to be turned into any forms of sanctions (as occurred with Russia) just yet.

But what has occurred is that the ‘Quad’ (US, India, Australia and Japan) have strengthened their resolve to counter China’s influence (both economic and military) in our neck of the woods (Indo-Pacific region). This potentially could be the start of more ‘real’ pressure being applied to China and will be a test of US President Biden resolve to try and make gains in the US versus China trade and influence battle.

So, does NZ even have a choice? Even if she does, it so obvious that China is the only choice.

Find somewhere else to parrot your parties rhetoric Zhang.

NZ chooses China for cheap of everything and mass scale, but you just don't realize that NZ just tip toeing, so far just for own selfish needs. Not pondering as to why NZ not choosing CCP made Sinovac? - NZ needs cheap credit from massive CCP to flow on buffering the overvalued property greed. And don't expect NZ will support their third largest ethnicity/Asians anywhere within Healthcare sectors. The Asians best bet is always one way here.. leverage your valuation to become a landlords. Do you think NZ will recognize C19 Sinovac ID passport?.. hmnn.

Regarding Sinovac vaccine passport, two things to note:
- WHO is expected to approve Sinovac this month
- Asians make up a large proportion of our high value tourists

Yes, NZ does have a choice. An increasingly clear one.

No we shouldn't have to chose one side or the other and I suspect a lot of countries in the EU would do the same. The Quad are against Chinese influence because they all have something to gain from it, where as for us it's a lose-lose whoever we chose. Our smaller economy and limited industries also means the NZ economy would suffer more and the average New Zealanders would pay a heavier price.

This is why we should separate economics from politics

The problem is, its the economics that funds the politics, or gives them the ability to wave the stats in peoples face. We export about a third of our stuff to China, but if they really start being more aggressive than they already are, we will have to start making some hard choices.