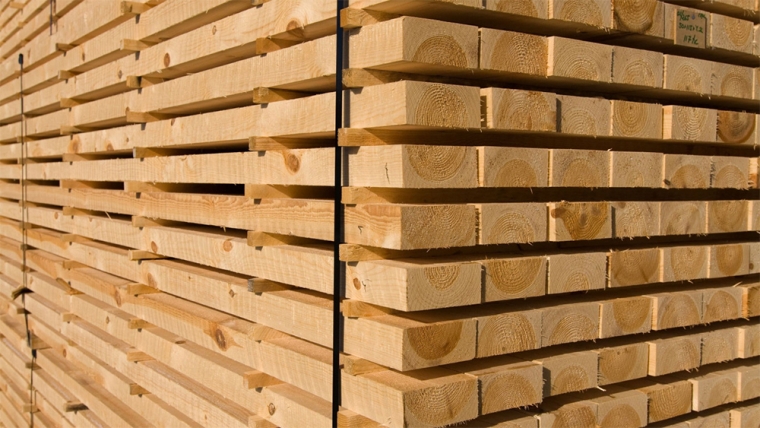 The At Wharf Gate (AWG) prices for export logs in July decreased an average of $8-9 per JASm3 from June prices. There was a wide range of prices depending upon location as demurrage costs in Gisborne due to port congestion affected AWG log prices. There were also different market strategy approaches by log exporters with their AWG pricing.

The combination of the usual drop in productivity in China during their hottest months was exacerbated by the Chinese government forcing some sawmills to relocate from Taicang, Jiangsu Province.

The Indian log market is showing signs of recovery with a shortage of logs anticipated in Tuticorin. The demand for logs and sawn timber in New Zealand has not reduced during the winter period.

The PF Olsen Log Price Index reduced $4 from the June record of $143 to $139. The index is currently $16 above the two-year average, and $14 above the three and five-year averages.

Log supply has been sufficient for mills through winter and prices are stable to increasing depending upon the region and where the prices sat relative to the export equivalent.

There has been no slowing in demand for log and sawn timber during the winter months in New Zealand. Consents for new dwellings in New Zealand continues its upward trend. New dwelling consents are graphed below. Consents to the end of May show an annual increase of 17% by number and 21% by value from the previous year.   This is very pronounced in the North Island where consents in Auckland were up 28% and the rest of the North Island was up 24%. Canterbury was up 13% while the rest of the South Island was down 4%.

The AWG prices for July dropped an average of $8-$9 per JASm3 around the country. There was a larger drop in Gisborne where ships are now having to queue for over a month before berthing. These demurrage costs are being passed along to the forest owner with lower AWG pricing. This has also recently started to affect Tauranga where vessel waiting times have moved out to 10 days. If the vessel waiting times do not improve this will affect August AWG prices.

The price for A grade logs was in the mid 190’s range for June and early July shipments. There is now a standoff between the log exporters and Chinese log buyers with LC’s not signed at 185 USD per m3 for A grade.

Softwood log inventory has risen to about 5.5m m3 and daily port off-take has dropped to around 60k m3 per day. While this drop in offtake was expected due to the hot sticky weather in China, the offtake over the last three years has dropped to only about 75k per day in July. (Last year was an anomaly due to the severe floods in China). In each of these years demand and log prices increased through quarter 4.

Many log processing facilities in Taicang will have to close or relocate after the government with very little warning, effected regulation in early July that will restrict sawmilling to specific identified industrial districts. Initial estimates are this will reduce milling capacity by about 50%. Taicang was China’s second largest port for softwood imports and received about 20% of China’s total softwood imports. Taicang is only just over 50km north-west of Shanghai so the regulations are likely to be a combination of government wanting to repurpose the land as well as reduce pollution. This land will most likely be repurposed for housing or higher tech companies. (Interestingly, Taicang is the hub for over 250 German companies in China).

We have seen similar occurrences in China previously and these have disrupted the log market in the short-term but have had no long-term effect. In 2018 under the Governments “Three Year Plan on Defending the Blue Sky”, over 3,000 wood-based panel enterprises in Hebei Province were told to stop production and undertake refurbishment or relocate. In 2019, Shenzhen’s’ local government decided to move the sawmills away to utilise the land for other industries. 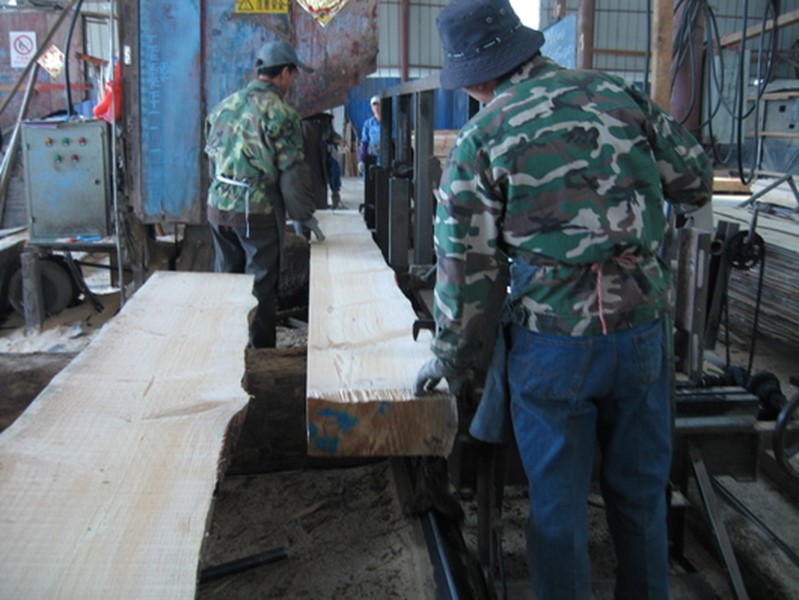 Log demand in China usually ramps up after the golden holiday week at the start of October. At the same time there will still likely be constrained supply for several reasons:

Log prices are likely to increase through quarter 4 as supply struggles to keep up with demand.

Fire damaged pine logs exported in containers from Australia to Mundra port is near zero. Log quality within specifications has been very variable.

A log shortage is anticipated in Tuticorin in September, as shipping liners are citing congestion and not providing containers to Indian ports. In South Africa, the Durban riots have made many shippers count their losses and has also displaced shipments. In the Tuticorin market sawn timber prices have risen to around INR 700 per CFT.

European pallet grade sawn timber is quoted at a wide range of EUR 275 to 400 CFR in Tuticorin. The price depends on whether the sale is in stock lots or cut to order sizes. Some Indian log importers plan to experiment using cheaper poplar logs from Europe for pallet making.

Shipping costs to China have crept up to above 60 USD per m3 from North Island ports. The Baltic Dry Index was sitting at 1200 in November and is now at 3059.  Demurrage costs caused by congestion in Gisborne and more recently in Tauranga will add significantly to exporters costs. 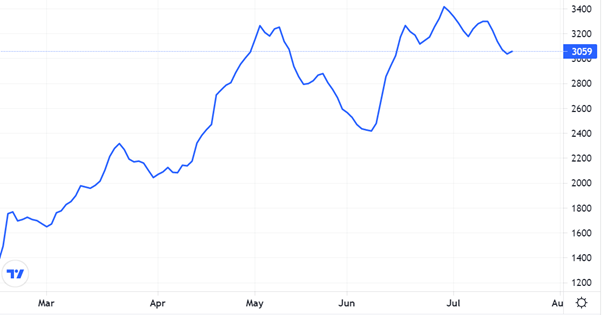 The Singapore Bunker Price has continued to edge upward. 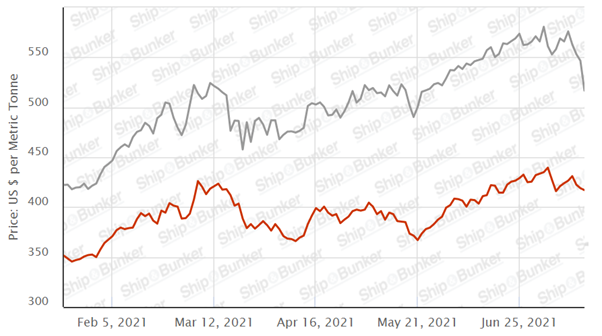 The PF Olsen Log Price Index reduced $4 from the June record of $143 to $139. The index is currently $16 above the two-year average, and $14 above the three and five-year averages. 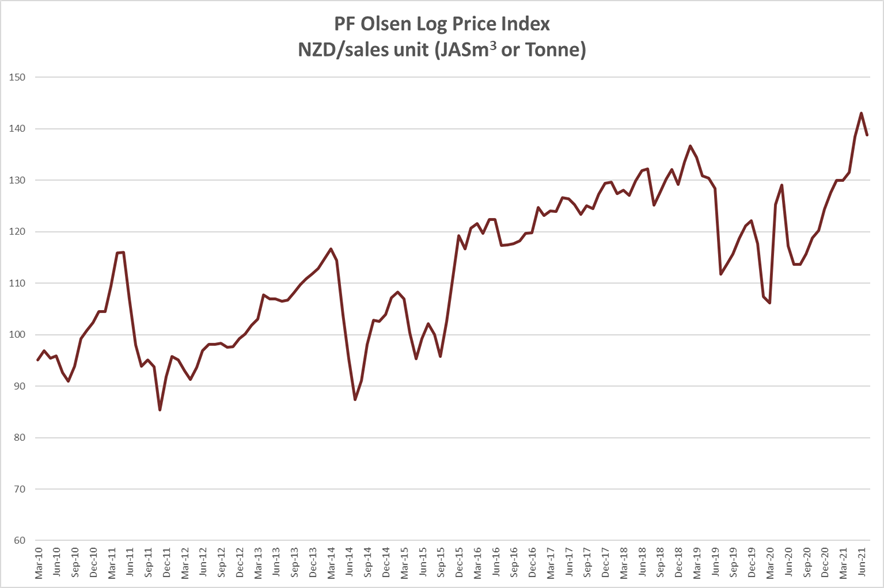 pretty even if the association has done its job

pretty evan if the association has done its job

This article is about log prices ex forest as in a commodity. If you want to know retail timber prices ring your local timber merchant. Or you could buy a log and deal with it your self.