Guy Trafford looks at how the final farmgate milk payout price evolves from the first pre-season estimates. He also tries to make sense of falling lifestyle block sales volumes even though prices are holding 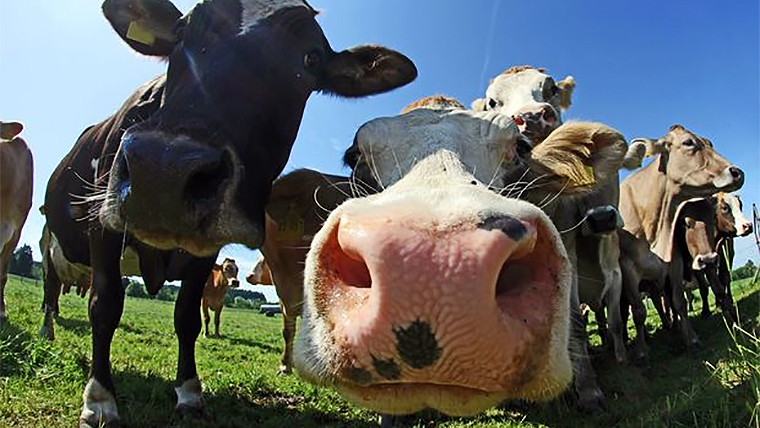 Just a final word on Fonterra’s initial forecast (covered here) with the mid-point at $9.00kgMS in the perhaps unhelpful but realistic $8.25 to $9.75 range (and reinforced by Rabobank's $9.00), farmers may be feeling a little more optimistic than would be expected.

The next bi-annual Federated Farmers survey (published June/July) will make interesting reading given the countervailing forces acting upon world trade. Given the topsy turvy route the current milk price took (so far) to be at $9.30/kgMS ($9.10-$9.50) a look back to see what its starting point was might be of interest.

Below can be seen a comparison of the last seven years forecasts against what the final pay-outs were. 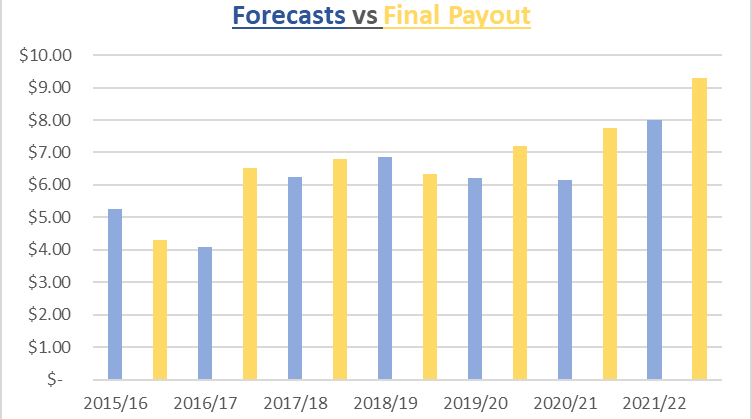 As can be seen, while the trends (mostly) follow the same patterns, for both numbers you wouldn’t want to bet your house on the final result at the start of the season.

Since the restructure of the Fonterra management and the coinciding of improved prices, the forecasts have become more conservative against the final result. These forecasts have also come at a time when projections are facing more and more volatility and hence the wide spread. Given the head winds farmers no doubt will cut forecasters some slack on their accuracy at the moment.

China is continuing to be a major component of the many unknowns. Apart from the direct impact of Covid upon the Chinese trade logistics, there are starting to emerge whispers that President Xi Jinping desire to extend his 10-year rule may come under pressure. While China led the world in its handling of the Covid virus in the early stages, the lack of developing or obtaining a viable vaccine that is effective against the recent varieties is starting to create whispers of dissatisfaction. President Xi next test of his ambitions to lead China for life (he seems to have ambitions for a further a further two terms) comes in November 2022 when the next Communist Party National Congress will be held.

Pressure must be building from the way they have handled the pandemic recently, and a GDP growth rate that is falling behind what Chinese are used to. Along with the intense criticism from many of the international community around China’s foreign relations policies, President Xi will be feeling more pressure than he is used to for some time. At the moment there appears to be no obvious successor and that may be the one thing that keeps the status quo. What a change at the head would mean is guess work, but it does add to the uncertainty around our largest market.

For a change of topic and contributing to Greg Ninness's analysis of rural property market last week, is this table:.

Due to the differing time periods there are differences over what Greg published and these are listings not sales or prices. One of the things of interest in Greg’s article was the fall in the number of Lifestyle Blocks (down -36%). However as someone now has too much of their retirement fund tied up in one it was good to see prices are up +24%. Perhaps the lack of sales is a reflection of the impact of Covid with people finding the pleasures of ‘the good life’.

Overall, while sales numbers are down prices are holding or improving, it is likely some reflection of the good product prices being experienced across the board. However, uncertainties and the increase in interest rates are no doubt having a bit of a dampening effect, encouraging buyers to behave in a rational manner going forward.

A change in the leadership of china could have massive ramifications for us and the rest of the world. A new leader who was more world inclusive could make huge gains for china particularly if he shunned Putin also . We are so vulnerable to trade issues with China , at the moment we are walking a tightrope with China and the USA that sooner or later we are going to need to pick a side .

Your graff doesn't include the 2014/2015 season which for memory had forecast of 7,25 and ended at 4.40. we had a 5 bucks advance payment for June and July. Oops that was bad business.  Would like payments fully payed every 3 months. Instead waiting 16 months for full pay. so last century.

The DIRA rules mean they cant operate like the old Dairy Board did with a traditionally conservative opening price that gradually ramped up through the season. I did challenge Hurrell when they opened at $8 this season, after the previous managements' mismanagement but he remained steadfast, I wished him luck, and he turned out right. All we need as suppliers is for the board and management to display consistently successful decisions that they then share with us in easy to understand English.

Regarding farm sales/listing stats - sales happen in waves. When word spread on what forestry was paying up here a significant number of beef and sheep farms were sold, both on and off the market, now that initial surge has slowed until government finalises the new rules.

And if you owned a lifestyle block and looked at the issues city dwellers have faced with Covid restrictions wouldn't you delay downsizing back to town especially if you can work from home at least part of the week.