A weaker Chinese market, higher shipping costs, and the currency impact have driven At Wharf Gate log prices down more than -20% in 2022. Meanwhile harvesting contractors are suffering fast rising costs 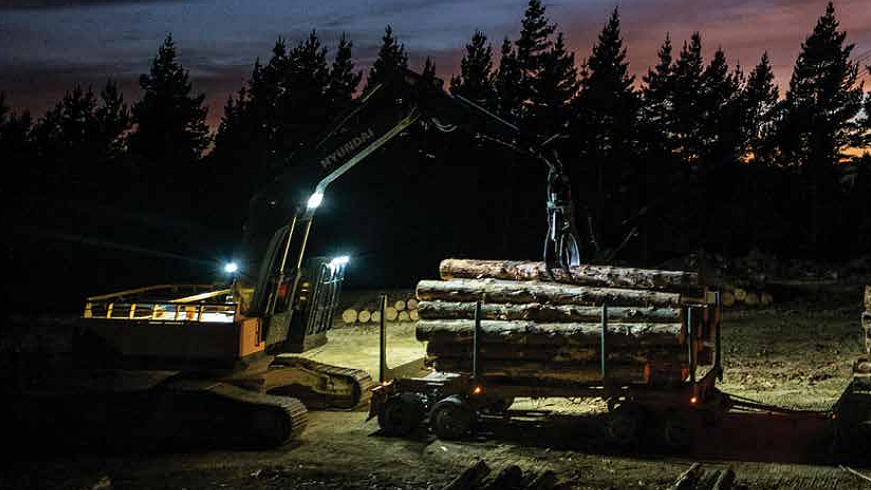 The triple effects of weaker sale prices in China increased shipping costs and the NZD strengthening against the USD, caused At Wharf Gate (AWG) prices in New Zealand to fall by an average of 23 NZD between May and June. Softwood log inventory has dropped in China and daily log use has started to increase.

Log pricing has been consistent through Quarter 2. High inflation will put pressure on log prices in Quarter 3. Forest owners have seen significant increases in costs from contractors due to fuel and wage increases.

Most mills are starting to get through their back orders for domestic sawn timber. Exports of sawn timber to China are a struggle due to an earlier influx of European wood into China. Timber trade within Finland between January and May was 32 percent lower than a year ago so more timber has been sent to China. This supply will likely slow down, as wood supply shortages are starting to take hold in Europe due to the ban on Russian and Belarusian timber and reduced supply from the Ukraine. Russia, Belarus and Ukraine accounted for nearly a quarter of the worldwide timber supply and 53 percent of the EU's sawn timber imports in 2021.

China softwood log inventory has dropped over the last month from 5.6m to 5.0m. Daily port log offtake has risen from 70k to 85k. The CFR price for A grade logs currently ranges between 145 and 150 USD per JASm3 and appears to have bottomed at 145 USD.

The May Caixin China Manufacturing PMI increased to 49.1 from April’s 26 month low of 46.0. This also beat market forecasts of 48.0. While an increase is good news the PMI is still below 50 which indicates contraction, but the rate of contraction has at least slowed.

Some Chinese property developers are still struggling, and in a bid to attract buyers China Central Management has advertised it will accept wheat or garlic as part of the deposit on houses in the central province of Henan.  Another developer Poly Real Estate said it would gift a 100kg pig to house purchasers on one of its residential projects.

Authorities in China have increased efforts to revive home sales by lowering mortgage rates and easing rules on home purchases. Property sales in May by the top 100 developers in China has fallen 59% from May last year.

Demand for sawn timber in India remains subdued due to ongoing shortages in container availability for exports. Liners are repositioning empty containers from Dubai and Singapore for export of Indian goods.

Kandla port will receive about three log ships from South America during July. Kandla green sawn timber price is hovering at INR 621 for South American and INR 671 for Australian origins.

Kandla may get 4 ship loads from South America, during August.

Tuticorin is facing a log shortage. A part bulk shipment is expected to arrive at Tuticorin port in early July, to discharge about 16,500 m3 from Uruguay. This may be enough for three to four months, as mills are not getting adequate sawn timber orders to operate throughout the week.

The price for sawn timber has dropped to INR 681 to 701 per CFT, cut from South African and USA logs, respectively.

Shipping costs have dropped on average over 10 USD per JASm3 for log exporters to China from New Zealand over the last month. Vessel congestion in New Zealand has eased and this will also benefit AWG prices at some ports. 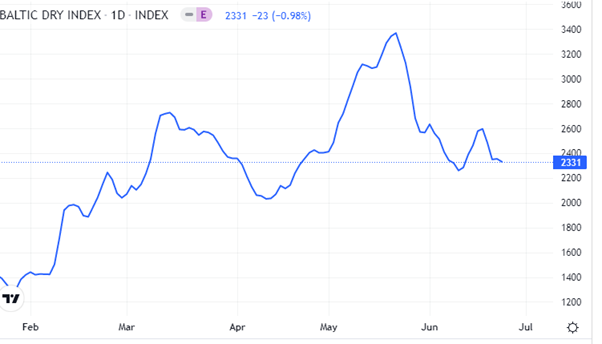 The Baltic Dry Index (BDI) is a composite of three sub-indices, each covering a different carrier size: Capesize (40%), Panamax (30%), and Supramax (30%). It displays an index of the daily USD hire rates across 20 ocean shipping routes. Whilst most of the NZ log trade is shipped in handy size vessels, this segment is strongly influenced by the BDI. 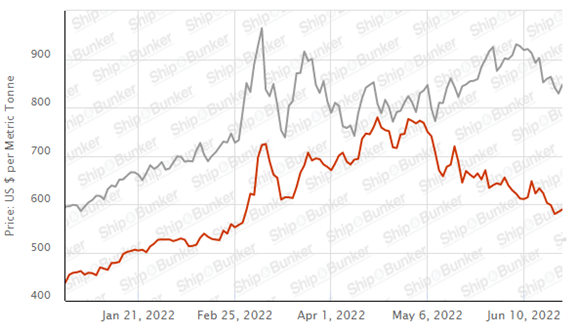 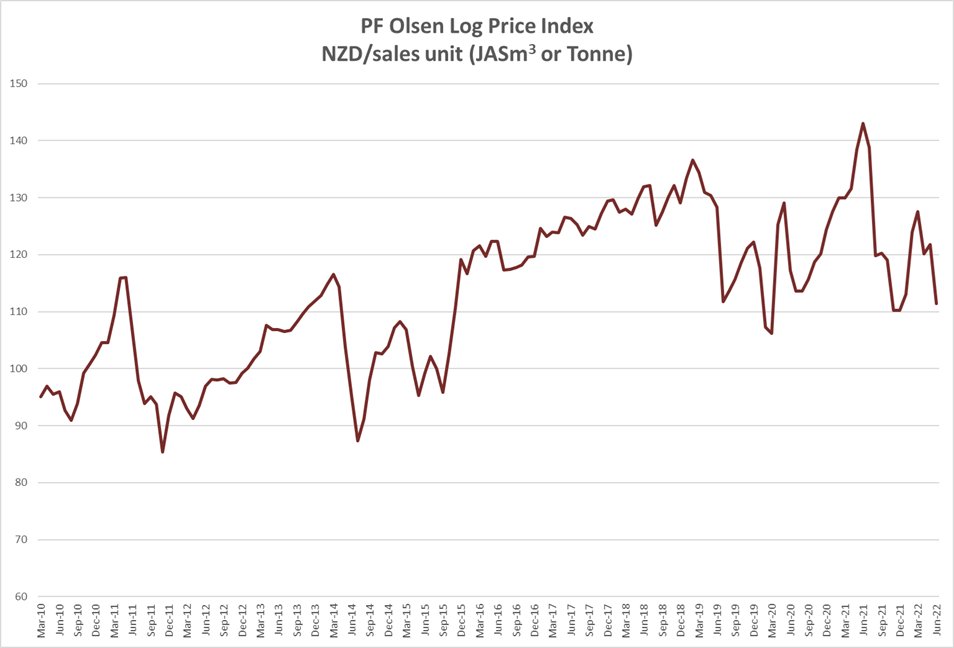 So when do we get to see lower log prices reflected in our lumber prices. Hope Bunnings buyers are onto it .

No labour for extra sawmill shifts. Structural timber mills are a poor investment - for example Prime Sawmill in Gisborne has had eight owners in 35 odd years and lost tens of millions of private and ratepayer money.

The IFO 380cst vs Brent Crude graph is somewhat deceptive when talking about NZ Logs.

This refers to the 3.5% Sulphur IFO (intermediate fuel oil) price whereas about 95% of handysize vessels are restricted to burning 0.5% Sulphur VLSFO (very low sulphur fuel oil). Only vessels which contain a sulphur scrubbing device can consume IFO and this is usually only found on SupraMax vessels or a few of the newer Handysize (later than 2019)

For reference current VLSFO fuel price is around USD 1,130/MT according to PLATTS Bunkerwire.