Allan Barber says Australia is struggling with irrational local community reactions to assessing foreign rural investment, and New Zealand has some clear advantages in this process

Allan Barber says Australia is struggling with irrational local community reactions to assessing foreign rural investment, and New Zealand has some clear advantages in this process 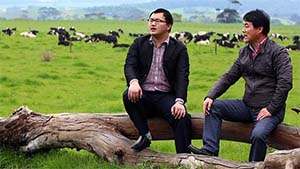 The front page of Saturday's Weekend Australian showed a disconsolate Chinese dairy investor standing on a Gippsland, Victoria, property on which his company Ningbo Dairy Group had hoped to farm 1,000 dairy cows.

The plan was to house the cows in barns and produce milk for bottling in a A$6 million bottling plant on another property for airfreight as fresh milk to China.

But in spite of encouragement from the Victorian State government  and against the recommendation of its own planning department, the local Bass Coast Shire Council has rejected the application after receiving 430 objections to Ningbo's plans. The justification for the decision is the incompatibility of the barn and bottling shed with surrounding land use, although the farms are zoned for agricultural production.

The Council denies the seven councillors were swayed by the strength of local opposition or the issue of foreign investment, but it is hard to believe this played no part.

Objections ranged from the  reasonable - effluent and drainage issues, large increase in daily truck movements, and impact on tourism and the landscape - to the xenophobic, such as the company is Chinese, the milk would be flown to China, Chinese workers could be imported to staff the operation, and the investors are only interested in profit.

Victoria's state planning policy which the council is obliged to follow decrees agricultural development should be encouraged in Gippsland and land-use conflicts resolved because of the need to foster economic growth in the region. However expansion plans must be sustainable and consistent with orderly planning. It is not clear how this apparent impasse between State and local government will be resolved.

New Zealand has its RMA to guide decisions like this which would have at least provided a forum for evaluating the pros and cons. The Chinese investors have not yet decided whether to appeal the rejection, but it is uncertain if this will produce a more favourable outcome.

The issues at stake are similar to New Zealand, but we seem to have achieved a more consistent method of refereeing between diametrically opposing viewpoints.

New Zealand should also be thankful it has its FTA with China already in place, negotiated by a Labour government, whereas Tony Abbot's government is facing opposition to its proposed ChAFTA. The opinion polls are narrowly in favour, but the Labor opposition leader Bill Shorten is trying to have it both ways. Under Gough Whitlam Labor developed a very good relationship with China, but 20 years later the Trade Unions are pushing Labor to vote against the FTA because of the fear Chinese workers will be entitled to take Australian jobs.

There is no doubt many Australians are trying to resist the impact of foreign, specifically Chinese, investment and the political parties are either in favour in the Liberal government's case or torn by dissent in Labor's.

Returning to the specific issue of the Ningbo Dairy Group, it is not difficult to imagine the uproar if this was a New Zealand problem, certainly from at least one political party. The investment by Shanghai Pengxin in the Crafar farms as well as other South Island partnerships provides ample evidence of this, although the high cost of our farm land may make it unlikely it would be viable to set up a fresh milk operation.

However the main differences between the Ningbo and Pengxin investments seem to be the ownership structure and the requirement for New Zealand participation in the ventures. Perhaps the Chinese investors in Australia's dairy industry need to look for local partnerships to make them more acceptable, but realistically this may not have made much difference in Ningbo's Gippsland investment. Local objections and the lack of an equivalent to the RMA already appear to have prevented it from going ahead.

Allan Barber is a commentator on agribusiness, especially the meat industry, and lives in the Matakana Wine Country. He is chairman of the Warkworth A&P Show Committee. You can contact him by email at allan@barberstrategic.co.nz or read his blog here ».

I can think of no other industry in which this would pass for an alert, acceptable argument. Any external irrationality is demonstrably equaled or exceeded by that within the industry, and the xenophobia spoken of appears to be towards citizens of the host nations, whether New Zealand or Australia.

What the piece does do is demonstrate just how little actual involvement the primary agriculture sector wishes nationals - New Zealanders or Australians - to have in influencing its directions, although it is a sector with significant, perhaps unmatched, national impact - economic, social, environmental, etc. To take just one environmental example, the RMA, which is highlighted in the article as a prominent safeguard, is under industry influence intended to become no more than a cardboard protection.

China may seem, to industry commentators and those deep in industry debt, to offer a much-needed saviour. This is neither an authentic commercial attitude - that which should exist in any value transaction between suppliers and customers - nor is it a realistic assessment of competing national interests. And, whatever smooth words there may be on either side, these are most certainly competing interests. The importance of China right now in rescuing this sector is directly proportional to its own failure in creating any value-driven, sustainable business model.

Certainly, China wants food security, and we are food producing nations. But China is no longer willing to be beholden to the price-setting of its suppliers. This is one of its central policy directions. New Zealand's much vaunted agricultural efficiency already depends on minimum waged immigrant workers. In commodity markets, customer control of the production and supply chain provides for control of prices. It's that simple. And how then will the industry - that is, the nation - service its debt mountain?

The agricultural sector, in its widest compass, is absolutely crucial to New Zealand's prosperity - although you wouldn't know it under present government policies or industry directions. People outside the industry have every right to reject substantial Chinese encroachment into this sector. We are asymmetrical economies, and competing political systems. We want - or should want - increasing, not reducing, incomes for our citizens. The alternative is to become mere spectators in our own declining economic and social destiny.

Why sell the goose that lays the golden egg? Cheap money has created a global economic war that the Chinese are aggressively trying to win. Our bureacrats see it as their job to help them do that. Changing the flag is a logical choice we are no longer a country but a global brand up for sale.

If the issue is one of supply then Fonterra should be leading the pack to package up milk into containers and airfreighting it directly to China.

After all, AUS and NZ are both raw material producers with relatively small and civilized population, abundant natural resources, good environment and good institutional rules.

Just hope whatever investments they both attract make the good better or at least keep the good the same.

You are a man of ideas

I think some departments are working on a 'fern mark' idea.

Products that are produced/made/packed in NZ and meet a threshold of x% of ingredients are sourced from NZ will be able to apply this 'fern mark' at a charge, providing the 'fern mark' is considered by producers that it will bring more benefit to them than costs.

Not my idea, someone else.

Oh dear, how sad. Maybe when we are able to see a smiling Kiwi or Aussie farmer successfully setup a farm and factory in China (specifically), fly in their own skilled staff (paid offshore, as none were available locally) and fly out the finished product ensuring it all just breaks even by those IP royalty payments (negligible tax) will I feel that the locals have no right to express a preference for businesses that enrich the local community over those which offer no benefit at all.
I have lost count of the attempts by special interests to fudge this into xenophobia shaming and distract from what will really happen.
Allowing this "investment" will have the same nett effect as fencing it off and spraying it with roundup.

Please get your hands on the nearest dictionary you can find and look up the words, "investment" "ownership" and "control". I am fairly convinced you will find they have very different meanings. Please, in future, use the correct word in articles such as this, replacing "investment" with either "ownership" or "control" and see how what you write looks after that, because that is the issue here.