Lower prices, lower processing volumes, and lower profitability casts a pall over the meat export situation in the second half of 2016

Lower prices, lower processing volumes, and lower profitability casts a pall over the meat export situation in the second half of 2016 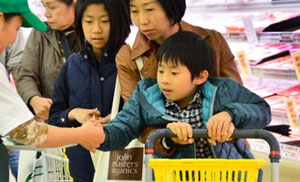 B+LNZ’s Economic Service has analysed meat exports for the first six months of the 2015/16 season and the figures show what might have been anticipated.

The weaker NZ dollar did not decline enough to compensate for lower beef shipments and a fall in the overseas market prices for both beef and sheepmeat.

Beef shipments were down 3.7% while the value fell 6.1%, although the entire drop happened in the second quarter; chilled beef exports were well ahead of the first quarter twelve months earlier with sales to North Asia showing a 55% increase. Exports to China and Taiwan were responsible for a 24% increase to North Asia for the six month period as a whole.

The overall decline was almost entirely due to lower tonnage and value of frozen beef exports, particularly to North America.

Lamb export tonnage rose by 5.9% because of the early processing season with sales to North Asia and Europe rising by 11% and 7.2% respectively, with the increase attributable to chilled lamb which represented 29% of total tonnage compared with 27% a year earlier. The average value of lamb fell by 4.2%, but this was cushioned by the weaker dollar by about 10%.

Mutton shipments were slightly ahead of the previous year, although the average value was down by 10%, with all regions showing a weaker trend. North Asian exports were well down, but this decline was offset by increased sales to Europe, South Asia and North America.

The total value of meat exports was 4.4% down on the previous year with the total tonnage marginally up, the difference being due to the fall in market prices cushioned by the weaker NZ dollar. 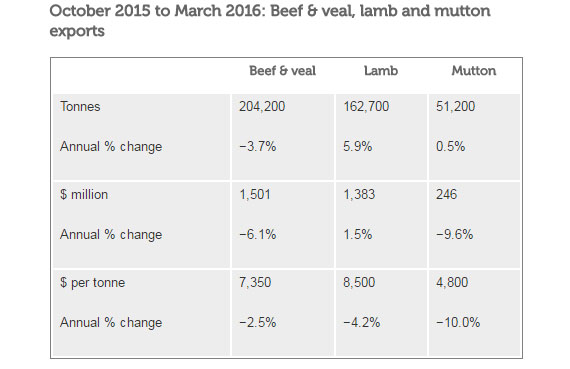 The outlook for the second six months does not look as favourable as the first half for several reasons: the volume of chilled lamb will be down considerably with no Christmas or Easter trade, prices have fallen across the board since the end of 2015, and the total lamb kill will be approximately 1 million down on last season in spite of the larger than usual pre Christmas processing volumes.

The word out of the far south suggests this will not be a vintage profit year for the processing and exporting sector, so for the time being at least the figures for the first six months may be about as good as it gets. A rise in global market demand and a further drop in the value of the NZ dollar will be necessary components of any improvement. In other words business as usual. A continuation of the slow decline of the industry which is in vicious cycle. Lack of demand, lack of profitability by processors and farmers leaving not enough to reinvest. Beef is having its moment in the sun off the back of the basic commodity but now that global supply is rebalancing we will be back to regular pricing.

Until we can more effectively differentiate our pasture fed point of difference and add and capture more value we will continue to bump along the bottom.The only solution offered to date is selling control of the value chain to foreign investors and hope they will feed us some crumbs down the line.

Global beef supply hasn't just rebalanced shaggers, it's going to be a clanger.
We are in a drought up here, not official yet but all my hills are brown, lots of crickets living in the cracks, sheep look thin on the neighbours and no one is too happy. The worst I have seen but I was away for the last big drought. Neighbours have been feeding out for a couple of months now and it must be starting to wear a bit thin.
Talked to a mate in Oregon in the apple business told me lots of big planting up there, Hastings apple land is going for 90k a hectare and it's only 10k a hectare in Oregon. Blocks over 7000 acres are being planted at present , where do we fit in?

Shagger,
I sympathise but you may remember the beef/ lamb farmers never controlled the value chain.
There was always a Borthwicks or Tesco controlling the overseas market
And to some extent that is why they never will.
How are you at growing Kiwfruit?

Aj,Sorry to hear of plight. Hopefully a good rain around corner as soil temps will be still ok.

If only PW, bit far south for the kiwi fruit, bit of a one trick hill country pastoral pony. Not suggesting the past was any sort of utopia merely suggesting being at fagg end of supply chain not a great place to be. Problem is with everyone concentrating on survival over an extended period long term decision making goes out window.

Yes,
Being a price taker is a grim business.
On reflection the cooperative system is a good one for commodity business but the shareholders have to make the boards they elect very accountable.
Perform or perish..no jobs for life..

Fair point. Fonterra coming to that point at moment.

Its a good example.
How is it done, I dont know, drive the cows through the middle of the shareholders meeting perhaps...

Im not familiar with shareholder councils, are they a part of corporate life or a fob off?

Not sure about how effective the Fonterra council has been as I am not close enough to the issues. In principle they are a good idea as they separated representation from governance and should act as a sort of cornerstone shareholder. There seems to be some opinion that it is seen as a stepping stone to the board so mutes councillors speaking out in case they are perceived as stirrers. There is some changes being mooted in the current review. Would be interested to hear an actual dairy farmers take on the effectiveness of the entity so far....?

Lower $? Against which currencies?

pwallst, as a Fonterra supplier and shareholder, I agree with your view on the importance of the cooperative model to primary producers.
With the formation of Fonterra the co-op model has been well and truly undermined and molded in favour of interests external to supplying shareholders advocating a debateable, but entrenched, corporate ideology from legislators through ticket clippers to our own farming leaders.

Being part of a cooperative is about and agreeing with long term business sustainability and intergenerational succession. A cooperative is part of and contributes positively to a wider community in which it's members also belong. It does require ongoing investment and contribution from its members for the sake of ongoing success, and it certainly would not hang local creditors to dry by not paying invoices for 90 days, who are also part of the wider community. As a result of profit retention co-ops should have strong balance sheets, so as to manage volatility, which our current directors and executives use as an excuse to justify their continual poor performance.

Fonterra has abandoned all successful cooperative principles, and one manifestation is the current board review referred to above by sheep shagger. The 33 page governance proposal opens with the line "Enhancing Our Existing Model', and I have to admit that is as far as I got after years of reading the same old tripe.

Also representation in Fonterra is based on number of shares help, debt funded or otherwise, and not the crucial co-op principle of one member one vote, therefore it's not easy to make boards accountable, as reflected in Fonterras performance and evolution since formation. The dairy industry is heading down the same road as the meat and wool industry.

Sheep Shagger, is Alan Barbers post written with farmers in mind or the so called efficient investor owned processors? If the processors and marketers were more profitable, would they share that with the farmer suppliers?