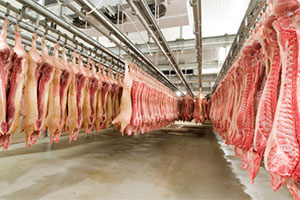 Just in case we think our meat industry has problems, they would appear to be nothing like as bad as those predicted for Russian meat companies.

An article which first appeared in March, but has only just been picked up by the Global Meat News website, notes that the Meat Council of the Eurasian Economic Union has predicted a quarter of pig producers, 15% of poultry producers and 20% of red meat processing companies could go bankrupt within two years.

The economic crisis which hit Russia three years ago has seen imports drop from 2.3 million tonnes in 2013 to 700,000 tonnes in 2015 because the market was unwilling or unable to pay the price for imported products. But the declining economy has also seen total meat consumption drop from 10.8 million tonnes to 10 mt over the same period with a further decline to 9.4 mt forecast for the current year. The impact of reduced imports will have worked its way through the system by 2018.

The outcome of these changes means domestic producers and processors will be competing for an ever lower volume of meat with the inevitable result of company failures.

The normal response to a lower volume of domestic sales would be to export, but for obvious reasons Russia is restricted from developing larger export markets because of trade embargos which have closed a number of desirable markets.

Russian consumers are spending less on food purchases, turning to lower priced products, which means the meat producers and processors must compete with cheaper products in an attempt to hang on to their share of the market.

What has been sustainable during the period of adjustment from lower import volumes will no longer be possible in a period of strong competition for the declining consumer rouble.

I think in NZ there is a shrinking of stock numbers, partly due to drought but also a change in policy from breeders who are cutting back numbers and fattening their own stock which started because of the loss of fattening land to dairy support. This spring the store sale prices are very high leaving slim margins for the fatteners.