China uses up its log stocks at a very fast rate, setting the stage for rising demand and prices for New Zealand logs and lumber

Rural News
China uses up its log stocks at a very fast rate, setting the stage for rising demand and prices for New Zealand logs and lumber 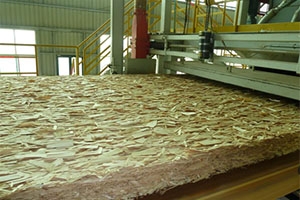 It would probably be remiss not to mention the ascendency of Donald Trump to the coveted position of president-elect of the USA, but since every journalist, news anchor, talk show host, blogger and panelist is covering this ad nauseam, Wood Matters will spare readers more coverage.

An immediate outcome (apart from mild nausea that such a thing could come about in the 21st century) is rallying USA and Asian share markets and a weaker NZ$. Both, on face value, are supportive of the log market.

On a more sombre note, Wood Matters and PF Olsen would like to acknowledge those affected by the recent devastating earthquakes centered around Hanmer but affecting a much wider area. We wish those affected courage and resilience as they work through putting their lives back together. Some of those affected include our clients and contractors, especially those working around the Marlborough and Wellington regions. Our local managers will try their best to minimise disruption and keep affected people informed.

The domestic market is “in-quarter” (4) and consequently has seen little movement in price. Demand remains strong.

After bottoming out in the middle of last year, the housing market in China is in a strong upward trend with 62 out of 70 cities monitored experiencing a lift in price in the past 12 months. Tier one cities are experiencing very strong house price increases (30% in Beijing). For more information, see the China Trip Report.

A recent report on log stocks at China ports reducing from 2.4m m³ in early October to 2.1m in early November. This 12% reduction is significant over such a short period and should support demand and price for NZ logs and lumber.

In a recent research report into log exports to China, Scion presented an interesting chart that showed (according to FAO’s 2016 statistics) that the trade of logs between New Zealand and China is the largest roundwood flow between any two countries in the world. The chart below shows the relative size of this and the other highest roundwood flows. 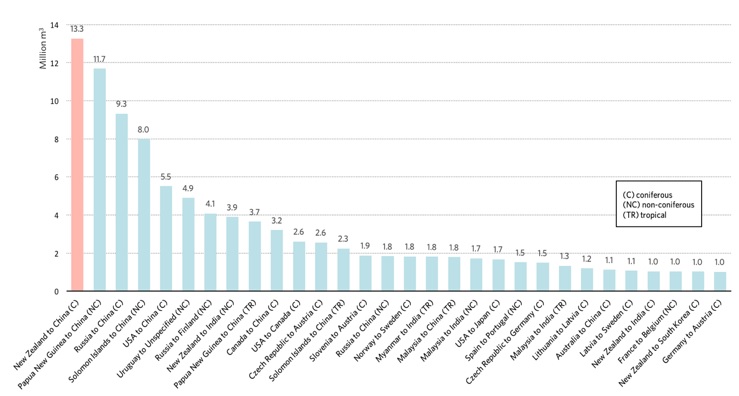 While the high ranking of the NZ-China log trade is note-worthy, another important point to note is the high volumes of logs from the Solomon Islands, Papua New Guinea, Myanmar and Malaysia. [It is likely that the actual trade flows are even higher among these parties than reported due to widespread official banning of purchasing illegally harvested logs.]

The point is, however, much of this harvesting is not sustainable and these South Sea hardwood logs are going to get increasingly hard for China and India to get hold of. This will continue to support the current strong trend of substitution to alternative timbers – Radiata pine from New Zealand performs particularly well in this substitution role and this will be supportive of demand and price in the future.

In an unprecedented move the Indian government has demonetised the two highest value currency notes of Rupees (the Five Hundred and the One Thousand Rupee notes). The move was to further the Indian government’s policy to erase “black money” and counterfeiting. The notes are being replaced by new high-security notes of Five Hundred and Two Thousand Rupee denominations.

A demonetisation amnesty window is available till 30th December 2016. Within three days of it being introduced approximately NZ$6 billion of the demonetised currency has been deposited in the banks. The enormous influx of cash is expected to decrease the cost of funds by 0.03 to 0.10 percentage points within the short to medium-term.

In the short-term, the demonetisation is expected to affect small firms and rural demand which is driven by the cash economy. Real estate has been affected as “black money” is used extensively especially in secondary sales and in tier two and three cities, and below. Business has come to a slow down with 200,000 ATM’s and banks being stretched; most people spend their time in queues exchanging their notes.

The banking sector has been stretched beyond imagination with a magnitude unseen in global history. This will result in slowing down of banking procedures for Letters of Credit and documentation as all bank staff are being utilised for the purpose of collecting and disbursing cash. This will flow into more difficult credit for log purchasers in the short-term.

Longer-term this bold move by the government is expected to be positive for New Zealand Radiata pine in India. Less “black money” will make the importation of illegally logged South Sea hardwoods more difficult and increase the rate of substitution to other log sources, including NZ Radiata pine. The lower cost of funds (borrowing) is also expected to be stimulatory for the economy and the housing market.

In the meantime, the India market is softer with various stories of stranded vessels (no LCs) and even of one vessel being diverted to China at late notice. Until the volatility of the demonetising bank notes blows over, the log market is likely to also be volatile and forest owners should be cautious.

India’s economy is expected to expand by 7.6% both this year and 2017 according to the International Monetary Fund. This is a full 1.0% higher than the rate of 6.6% forecast for China for 2016. 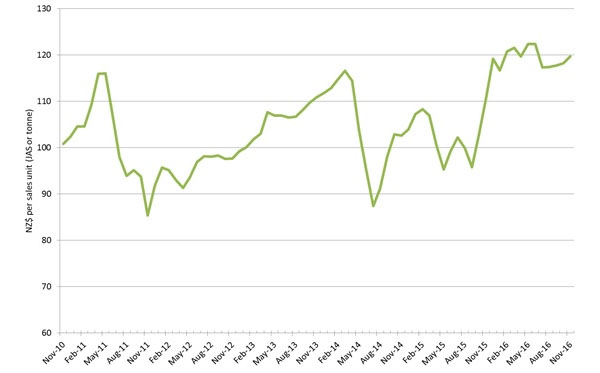 Question please'
I know we cut our forests down when it aged between 28/30 years,what happens if you leave it standing?
Does it deteriorate or bend out of shape or just keep growing.

Just a stab in the dark, but I suspect the heartwood kicks in about that age and the resinous nature of it doesn't take the treatments as well. Makes good firewood though.

Older, bigger trees are cheaper to harvest and have better wood quality. Your sawlog/pulp log ratio will improve over time. Problem is few mills in NZ geared up for large logs these days so market options are limited. If you have a mill handy that can take large diameter butt logs there is no downside for leaving in the ground for a few more years.

Trees can be harvested from age 26 to 32. There is the option to delay harvest if prices slump.

While the trees do continue to add volume (and value) they also become more expensive to harvest as they get bigger and heavier. The wider the tree diameter, the fewer of them will fit on the back of a truck.

Also consider, if delaying harvest a couple of years - then you're also delaying the next productive crop a couple of years as well, so you get to a point where the value of the log is diminished by the added handling / cartage costs, plus the land may eventually be better off starting a fresh rotation, rather than holding trees that are no longer gaining value at an optimal rate